The Iceland Monitor website here writes the North Alantic island is having its coldest summer in more than 20 years. According to the site:

The first thirteen weeks of summer this year have been the coldest in Reykjavik in over twenty years, reveals Icelandic meteorologist Trausti Jónsson.

The northern city of Akureyri fares even worse – one has to go back around thirty years to find a colder summer.”

Experts now say their are growing signs that this may be much more than a mere weather anomaly, and have more to do with an overall developing cooling trend. The Iceland Review site here writes that Met Office meteorologist Páll Bergþórsson warns how “Iceland may be entering a cold period“:

Iceland has enjoyed 25 years of above-average temperatures, Páll told Morgunblaðið, but those years may be over with a cold period taking over in the coming years.

‘The ocean here off Southwest Iceland is colder than usual and the cold is persistent after it first arrives,’ Páll stated.”

The cold is not isolated to Iceland, but appears to be spreading across the greater North Atlantic. Paul Homewood writes at his site on how the United Kingdom recently “saw one of the coldest July nights for many years“, with southern England setting a new record low of just 1°C on August 1st.

The cold gripping the North Atlantic likely is likely in large part due to cooling sea surface temperatures. The following chart from Climate4You shows how SST in June was at its lowest point in 14 years. 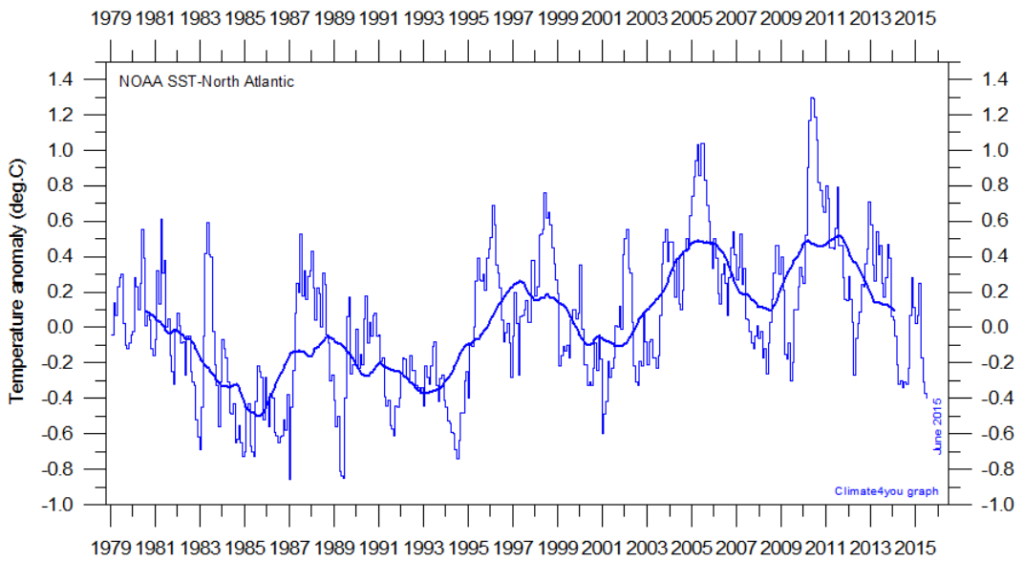