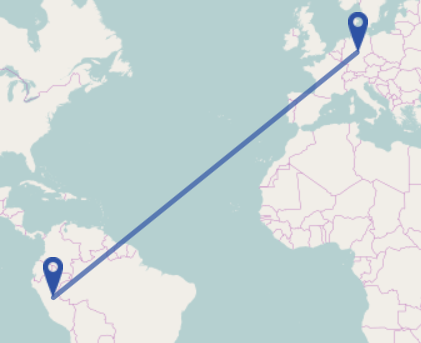 It’s ridiculous enough politicians are blaming the refugee crises on man-made climate change, even though everyone knows they are really caused by foreign policy ineptitude and debacles.

But now climate change hysteria has taken on new, more extreme witch-hunting dimensions that are on par with, if not even surpassing, those of the Dark Ages – a time when bad weather and crop failures were blamed on sorcerers, devils and witchcraft. The very same lunacy is happening today. But this time the responsible witchcraft is even on the other side of the planet!

NTV German public television here reports (and does so seriously) on a Peruvian farmer who is currently suing Europe’s largest power company, RWE, for its emissions 10,000 kilometers away in Germany – claiming that these emissions have caused the nearby Andes glaciers to melt through green-house gas induced climate change.

It is reported that the melting glacier has caused a nearby lake to expand, and it now threatens to burst its dam and flood the town where the farmer lives. NTV reports:

The farmer says that the dam needs to be upgraded, and RWE should pay its share of the cost.

Normal people of course realize this is nothing but a rigged enviro-publicity stunt that is designed to look like serious news by the German sensationalist media. This stunt of course likely will hurt the climate movement more than it will help because it is in fact so far-fetched that it is serving to vividly demonstrate just how far out of control the climate activism and hysteria have gotten.

According to environmental group Germanwatch, which helped organize the lawsuit filed in Essen, Germany, the farmer fears a flood from the nearby rapidly melting glaciers, claiming that because RWE is “Europe’s largest coal-fired CO2 emitter”, it must be held accountable for the damage to the glaciers from its emissions, and the hazard posed to local property.

This story is actually being presented (abused) by the German media as a legitimate grievance.

So how can a farmer in Peru claim that a power company some 10,000 kilometers away is responsible for nature not behaving the way he would like it to? After all, when compared to the global total emissions, RWE’s coal-fired emissions are puny. Firstly the suit was arranged at least in part by German environmental activist group Germanwatch, who is likely using it to get attention-grabbing headlines. Here the farmer is cynically being used as a publicity-stunt pawn.

Concerning the basis underpinning the claim itself, Germanwatch cites the IPCC, claiming that climate change is causing the glacier to melt and overfeeding the lake which lies just a few kilometers uphill from the town. The dam holding back the water risks breaking. It wouldn’t be so had RWE not emitted CO2, the suit appears to claim.

NTV writes that because RWE is Europe’s largest CO2 emitter, “the company should contribute to the financing of the protection measures against the growing glacier lake located above the town and correspond to the company’s share on the cause of climate change.”

Gee, now that I think about it, my last vacation was ruined by lousy weather. Shouldn’t it be possible for me to get fossil-fuel power companies to compensate for the damage I had to endure. Also the weather for my wife’s last outdoor birthday party was ruined by rain last June.

Yes, the neurotically hysterical witch-hunting days of the Dark Ages are back. The bonfires are being lit.