I expect this piece appearing at one of Germany’s leading weather forecasting sites, donnerwetter.de, to be controversial and that there could even be efforts to force the site to take it down. The commentary points out that some of the main elements of today’s environmental and climate movement sweeping across Europe were and are common among fascism and Nazi ideology.

In a nutshell: Yes, it’s good to be concerned about the environment, but let’s not get fanatic about it.

The relationship between the fascism and the green movement are well established, though maybe not very well known. The root of green is in fact quite brown. This is one aspect of the green movement that many environmentalists prefer not to bring up.

The core and fulcrum of modern ecologists and climate fascists is the view that mankind is the enemy of nature, and that we are all guilty of destroying nature. Nature stands for the ‘Good’ and the ‘Precious’, while man plays no role.

Rules of nature in the form of a falsely understood Darwinism are applied to mankind so that social responsibility no longer plays a role.

The rules for human interaction are taken from nature. Subjection to a ruling ‘race’ is accepted as a given. Nature above all and everyone: This way of thinking is very common among the extreme animal and nature protection parties.

Until the romanticists rediscovered nature in the 19th century, it had been considered more as a danger – as wilderness in which one could quickly starve and die. Today many ecologists see only the romantic side of nature; perhaps because man has been so dominant in crowding it out.”

“Carrying capacity” of “less than a billion people”

Finally, fascist ideologies are used when it comes to the world’s population. To be more precise, for reducing humanity to its level of ‘sustainability’. In Germany many hold views such as ‘There are too many’ and ‘war and selection are needed’ and even don’t shy away from expressing it publicly.”

This reminds us how once the high profile director of the Potsdam Institute for Climate Impact Research, Professor Hans-Joachim Schellnhuber, also advisor to the Vatican and Chancellor Angela Merkel, once said that the “carrying capacity” of the earth was “less than a billion people“. Sadly many climate scientists and activists seconded this personal population-hostile observation.

One major component of the green environmental movement is vegetarianism/veganism. These diets, comprising little or no animal-based foods, today are being increasingly heralded as climate friendly, and moral with respect to animal welfare and nature protection. It turns out that the promotion of these dietary practices and beliefs is nothing new as vegetarianism was the preferred choice of Nazi leaders and their ideology. The Israeli-based Haaretz here wrote recently: “The Nazis were Vegans, Too“. As reader the comments show, environmentalists and granola eaters were outraged Haaretz would remind us of that inconvenient psychosis.

At WND here Ellis Washington writes how the Nazis were avid organic eaters, writing that Hitler had been inspired by his favorite composer Richard Wagner who “argued in an 1891 essay that meat-eating and race-mixing were the twin causes of man’s alienation from the natural world. Wagner demanded a ‘true and hearty fellowship with the vegetarians, the protectors of animals, and the friends of temperance.'”

Recently reader Stefan B. sent NTZ an article from a 1937 newspaper, Der Schwarze Korps, which extoled the virtues of vegetarian diets. 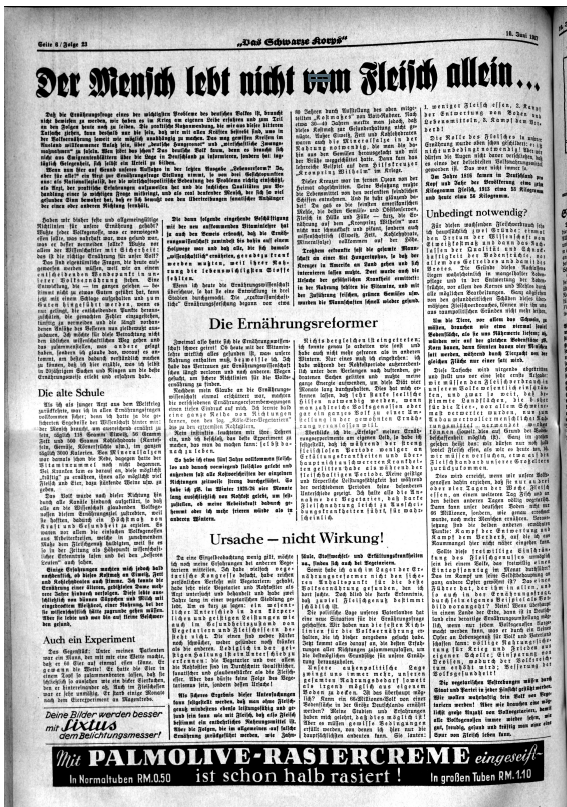 Among the propaganda in the full page feature stories shown above is a comparison between plant-eating horses, which are said to physically outperform flesh- eating dogs. It also notes that the raising of livestock for food requires far more agricultural land than food from grains, etc., i.e. the very same arguments we hear over and over again from environmental elitists today.

Of course being a proponent of organic or vegetarian diets alone does not automatically make one a (potential) fascist. What does send up a red flags, however, is how such a person views mankind’s place on the planet, i.e. as a legitimate inhabitant or as a pest that needs to be harshly dealt with. Too often it is the latter.