Over the past couple of days an “explosive scandal” has erupted in Germany. 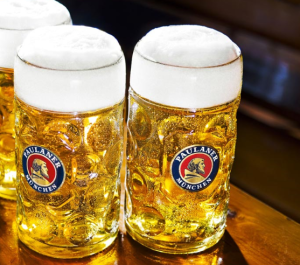 Greens warn of a “health danger”: Those 50,000,000 micrograms of alcohol in 1 liter of beer might contain a whole 29 micrograms of “unlikely carcinogenic” Glyphosate! Photo: normalkneipe.de/

This story is just the latest that so vividly illustrates how Green clean-freaks can erupt into a fit of irrational hysteria. And the drone media just blindly run with it.

According to the Environmental Institute in Munich, tests on 14 German beer brands that have the highest sales figures in the country were found to contain “traces of the pesticide”.

The highest intensity of the pesticide was allegedly found in Hasseröder brand beer with over 29 micrograms of the chemical per litre. Note here that we are talking about a few millionths of a single gram, and per liter concentrations in the billionths.

According to the English-language The Local here, the World Health Organization (WHO) labelled Glyphosate “potentially carcinogenic” in 2015. That means they are not even sure. And the EU food safety authority Efsa concluded that it was “unlikely that Glyphosate poses a cancer risk to humans”.

In a nutshell: the evidence showing that Glyphosate is carcinogenic, especially at those low levels, is scant at best.

What makes the story all the more comical is that by comparison German beer contains alcohol, and at concentrations of near 5%, or 50,000,000 micrograms. German blogger Ludger Weß here discusses just how ridiculous the reaction of the German Green clean-freaks has been. He notes that the chemical alcohol has been put in the highest hazard category (Class 1 – carcinogenic) by the International Agency for Research on Cancer (IARC).

The German Greens are thus demanding the public be hysterically concerned about 30 micrograms of “unlikely carninogenic” Glyphosate in beer, and not to worry at all about the comparatively whopping 50,000,000 microns of Class 1 carcinogen alcohol in the beer.

So what motive could be behind the irrational hysteria that has been brewed up by the green-leaning Environmental Institute in Munich? The Local writes:

With Monsanto’s licence to sell the pesticide running out in the summer, the European Commission will have to once again consider whether the product is safe for use in the EU.”

Just the latest dirty attack by environmentalists and greens aimed at an industry it wants to destroy. Create a scare story about a non-problem.

It’s always a good idea to really put all scare stories of environmentalist greens into the correct perspective. Almost all the time they are completely false and irrational.