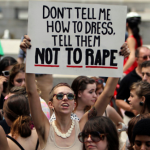 Share this…FacebookTwitterAngry mobs of leftists attacking Donald Trump rallies and the US Justice Department threatening to criminalize climate science dissent are just the latest undeniable, very clear signs the entrenched Establishment is in all out panic mode. If anything is certain, it is that they’ve lost the argument, and violence seems to be their last resort. […]