Europe’s energy policy is, under the bottom line, costing the lives of tens of thousands of citizens – all at the holy altar of “climate protection”. The title of the FOCUS article:

One of the sickest things about Europe and its disconnected leaders is that often it takes a full-scale disaster to happen before policy gets corrected. Often the scale of the death and devastation becomes known only after the clean-up crews have come in and sifted through the rubble. Think, for example, of Nazism, the Holocaust – or Soviet communism.

In the above named examples the true scale of devastation left behind became clear only after the drunk-on-ideology tyrants were defeated and their legacy finally put in the spotlight.

FOCUS now cites a documentary film which is set to be broadcast this evening on European television station ARTE. The documentary presents how Europe’s electricity prices are spiraling out of control, and the horrible consequences this is having on the continent’s citizens.

The situation, we are discovering, is far more disturbing than even the earlier worst case scenarios every imagined. FOCUS reports (emphasis added):

In 2014 in Europe there were about 40,000 winter deaths because millions of people were unable to pay for their electric bills – the so-called energy poverty currently impacts about ten percent of all Europeans. In the past 8 years the price of electricity in Europe has climbed by an average of 42 percent.”

FOCUS writes that the poor are the real victims of “socialist” Europe’s clean energy drive. In Bulgaria people see half of their income gobbled up by energy costs alone. In Spain 28 percent of the citizens live in “energy poverty”. In Germany, FOCUS writes, 7 million households are considered to be living in “energy poverty”.

The consequences of energy poverty are profound: tens of thousands of deaths every year, as millions lose their power.

Of course one needs to be very careful when describing disasters involving mass-death and bad science. History has seen so many over the 20th century alone. In the current century we have seen already tens of thousands die because they have been denied affordable energy, a product which in any advanced society is (or used to be) considered a fundamental human right, just as is clean water.

How much more unaffordable must energy become, and many more tens of thousands of wintertime deaths does Europe have to witness before the continent’s leaders wake up to the “green energy” folly? There are no longer any excuses. The facts and data are out there, and leaders need to take life-saving action. Refusing to do so at this point borders on gross negligence.

The ARTE documentary reportedly shows how Europe’s citizens, including environmental activists, are becoming more worried and that electricity is now increasingly being called a “luxury product”. FOCUS adds:

Their anger is clearly palpable as indeed governments have deceived and disappointed many citizens, and they cannot cope with the protests.”

As electricity prices spiral out of control and mass, uncontrolled immigration of Arabians continues, Europe is keeping its social power kegs especially dry. 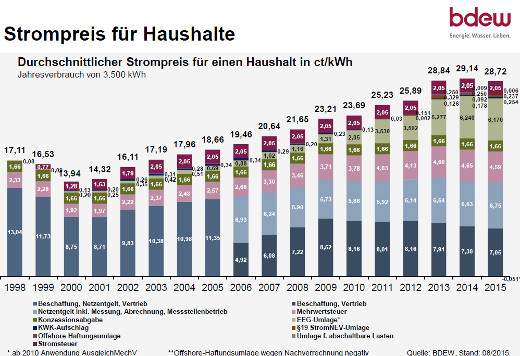 After the German market liberalization of the 1990s, electricity prices for consumers fell and became affordable. But after the enactment of the feed-in act prices rose strongly and now 7 million households are in “energy poverty”. Source: BDEW.