Huge NOAA Correction! 2016 Likely Will Not Even Be Close To Setting New Temperature Record As La Niña Kicks In

What follows is the BOM Climate Model Summary from 16 March 2016 with the NOAA/CFSv2 prognosis: 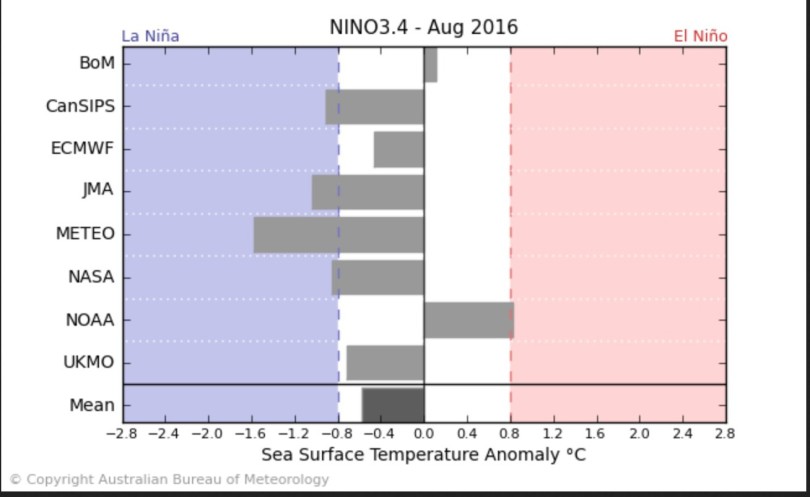 The mean is depicted by the lowest bar. In mid March many ENSO models were already predicting La Niña conditions by August 2016. The NOAA/CFSv2 is a clear outlier. Source: www.bom.gov.au/climatePacific-Ocean

The NOAA/CFSv2 modelers have in the meantime admitted to a cold bias in their programming, foremost at the equatorial in the Atlantic, which led to a false computation of the equatorial Pacific (ENSO) computation, as Dr. Roy Spencer of the UAH reported: Impact of CFSv2 Model Fix on 2016 La Nina Forecast.

The false, overly warm NOAA result is shown in the “Before fix” image below (left). The corrected version is depicted by the “After fix” image (right). Note the huge difference we see in the equatorial Pacific region. The chart below shows the anomaly from the mean: 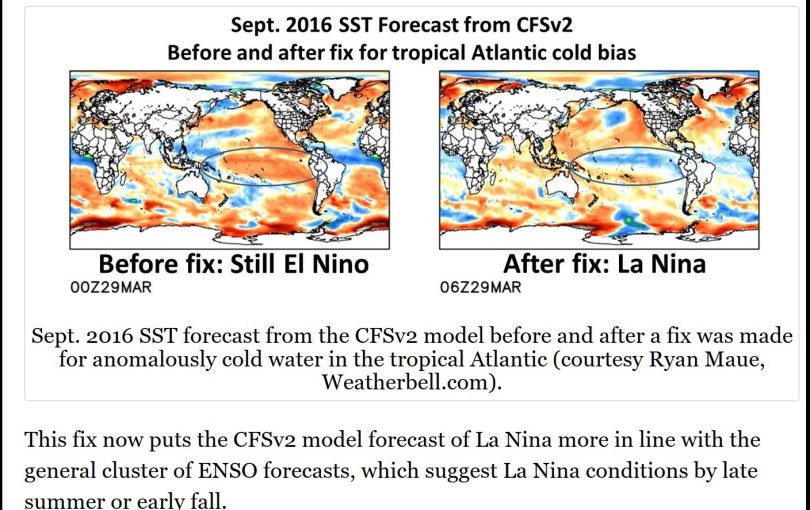 Screenshot: The charts by Dr. Ryan Maue show the projected SSTA by the NOAA/CFSv2 for September 2016 generated on 29 March 2016 before the error was corrected (left) and after the correction (right). Suddenly a La Niña appears in the forecast. Source: Impact of CFSv2 Model Fix on 2016 La Nina Forecast.

The Australian BOM Weather Services consequently removed the “warm” NOAA/CFSv2-ENSO forecast from its “ClimateModelSummary” (see chart above) and thus the mean forecast of the remaining ENSO models for August 2016 stands at -0.7°K, thus putting it clearly in La Niña territory: 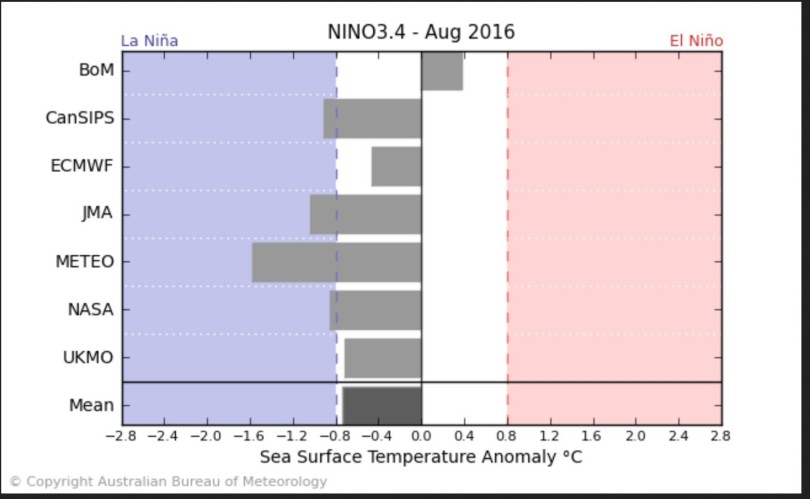 The mean of all models (bottom bar) – without the NOAA/CFSv2. The forecast is  -0.7 °K deviation in August 2016.  Source: www.bom.gov.au/climate/Pacific-Ocean.

The current CFSv2-ENSO prognosis is now approaching the mean of the other ENSO model forecasts (blue lines). Some models are showing very powerful La Niña conditions close to -3° K hitting later this year. Only the old, too-warm calculations (shown by the bold black dashed line) is falsely in the positive range: 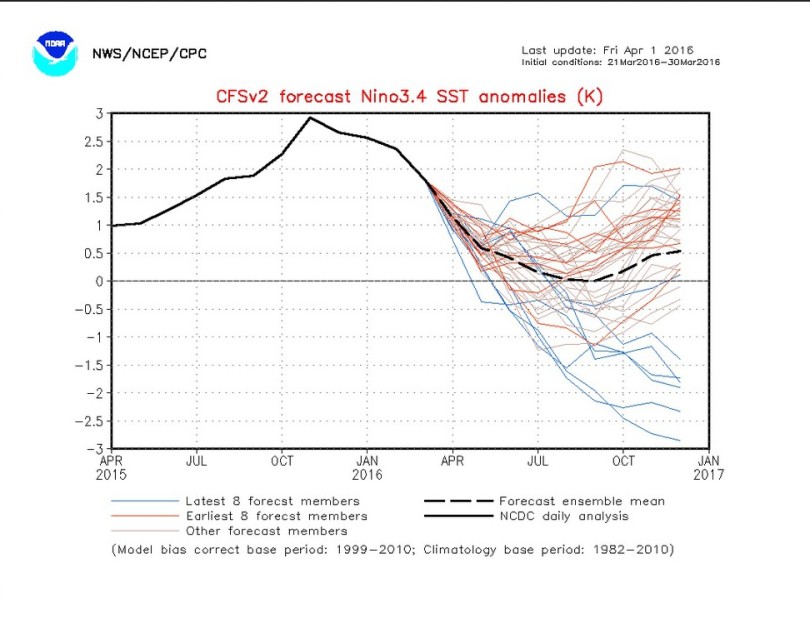 The plot above shows the partially corrected ENSO forecast of 1 April 2016 for the SSTA in the ENSO 3.4 area for the coming months. The current (corrected cold) forecasts (blue lines) are, for some, showing La Niña values of -0.5°K and colder already arriving in June. In autumn 2016 many models are forecasting -2.0°K and colder! Preliminary indications are showing a powerfully cold La Niña is in the pipeline. Every new ENSO forecast is becoming suspenseful. Source: www.cpc.ncep.noaa.gov.html.

Schneefan writes that the global satellite data for the lower troposphere (TLT) from UAH are as expected headed down wards after having reached its peak of 0.83°K in February (March: 0.73°K), see: UAH V6 Global Temperature Update for March, 2016: +0.73 deg. C.

The GFS forecast for April 2016 also sees a considerable drop with the global 2m temperatures:

The above plot shows the measured and calculated anomalies from the global mean temperature using the usual modern WMO 1981-2010 climate mean. The computed trend for early April (black line) is steeply downward, even though it is computed using the NASA/GISS “adjusted” (falsified) factor. Source: www.karstenhaustein.com.php.

Schneefan comments that the current unusual weak solar activity and the currently oncoming cold ENSO development will make it clear that the recent claims of a warming planet were more hype than anything else, and that the real trend is cooling over the coming years.

It’s still early to be predicting a La Niña of -3.0°K. Expect that figure to be corrected upwards. One thing is clear: La Niña arriving this fall is becoming an almost sure bet.

31 responses to “Huge NOAA Correction! 2016 Likely Will Not Even Be Close To Setting New Temperature Record As La Niña Kicks In”