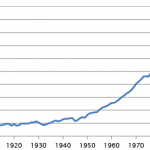 Share this…FacebookTwitterThe following clearly shows a complete lack of correlation between CO2 and temperature. Most of the 20th century warming occurred before 1945, and clearly was linked to natural factors at time the planet was emerging from the Little Ice Age. ==================================== Explosive (Non-Anthropogenic) Warming in the Early 20th Century By Kenneth Richard As Figure […]