As Figure 1 depicts, human CO2 emissions were essentially flat during first half of the 20th century.

Yet, the world’s climate warmed dramatically throughout this period. For example notice how steep the rise in near-surface (0 – 20 m) ocean temperatures was between 1900 and 1945 according to Gouretski et al. (2012, “Consistent near-surface ocean warming since 1900 in two largely independent observing networks“). 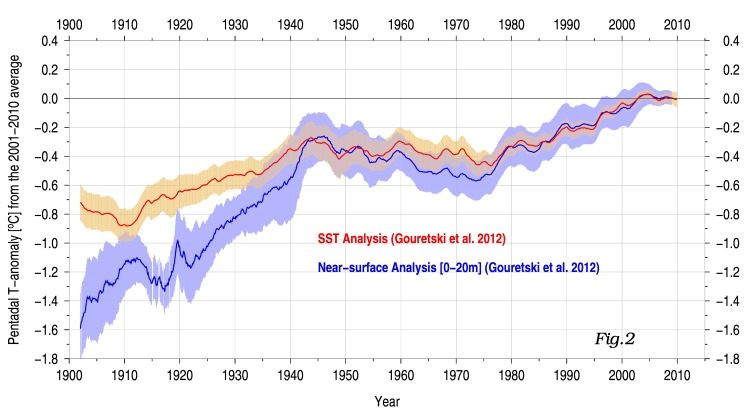 These warming (and cooling) trends in the near-surface ocean are the opposite of what would be expected if human CO2 emissions were the primary driver.

What follows are some of the details of this dramatic early 20th century warming as documented by Princeton geologist Dr. Erling Dorf, a veritable expert on the subject. Notice from the summaries provided below that sea levels were observed to be rising at a rate of about 8 mm/year between 1930 and 1948 (6 inches in 19 years), which is more than double today’s modeled satellite altimetry rate (3.2 mm/year).

These early 20th century temperature and CO2 trends beg the question: What were the physical mechanisms that caused this dramatic global-scale warming, since anthropogenic CO2 emissions were both low (~1 GtC/year) and stable during this period?

CLIMATIC CHANGES OF THE PAST AND PRESENT

It has been observed, however, that the greatest temperature increases during the last hundred years have been in the Arctic regions. In Spitsbergen, only about 10 to 12 degrees from the North Pole, the mean winter temperatures have risen about 14° F. since 1910 (Willett, 1950). Ice-free ports there are now open to navigation about 7 months of the year as compared with only 3 months fifty years ago (Ahlmann, 1953, p. 32). If the warming trend of the north polar region should continue at its present rate, it has been estimated that the entire Arctic Ocean would be navigable all year long within about a hundred years. At the opposite end of the world, according to recent reports from the Weather Bureau (Wexler, 1958), the Antarctic region has undergone a rise of about 5°F. in average temperature in the last fifty years. There has been no appreciable rise, however, in the mean annual temperatures in the tropical regions of the world.

What have been some of the notable results of this warming trend during the last hundred years? Glaciers throughout the world have been melting away at a rapidly increasing rate. Brooks (1949, p. 24). the eminent British paleoclimatologist, stated that “Since the beginning of the 20th Century glaciers have been wasting away rapidly, or even catastrophically.” In the Juneau region of Alaska, all but one of the numerous glaciers began melting away as far back as 1765. Muir Glacier, for example, has retreated as much as two miles in 10 years. Baird and Sharp (1954, p. 143) have referred to the “alarming retreat of glaciers” in the Alaskan region; along the Pacific Coast of North America and in Europe they believe the glacial melting “appears to be progressing violently.” In the north polar region, measurements of melting of the ice islands in the Arctic Sea indicate an approach toward an open polar sea (Crary, Kulp, and Blarshall, 1955). In only a few regions of the world, such as the Pacific Northwest, are there any records of glaciers advancing during the past century, and these have been mostly since 1950 (Hubley, 1956). The warmer temperatures have also caused a general rise of the snow line throughout the mountainous regions of the world, even in the tropics: in northern Peru it has risen about 2700 feet during the 60 years.

Believed in large part to be the result of the melting of the world’s glaciers, sea level has been rising at a rapidly increasing rate, amounting to as much as a 6-inch rise from 1930 to 1948 (Marmar, 1948). This is about four times the average rate of sea level rise during the past 9000 years, as recorded by Shepard and Suess (1956). It should be noted that more than a six-fold increase in the rate of sea level rise occurred in the mid-1920’s at the same time there was a striking change in the rate of glacial melting in the north (Ahlmann, 1953, Fig. 11).

Changes in vegetation brought about by the warmer temperatures include the encroachment of trees into the subpolar tundra as recorded in Alaska, Quebec, Laborador, and Siberia. In the Canadian prairies the agricultural crop line has shifted from 50 to 100 miles northward as a result of the lengthening of the growing season by as much as ten days. In parts of northern New England and eastern Canada the birch trees have been dying off over large areas, and the spruces and balsams have begun to suffer as a result of the rise in summer temperatures. In Sweden the timberline has moved up the mountain slopes as much as 65 feet since 1930 (Ahlmann, 1953, p. 35).

In the animal world many southern types of both birds and mammals have been extending their habitat ranges northward as a result of the warming trend. The cardinal, the turkey vulture, the tufted titmouse, and the blue-winged warbler, as well as the warmth-loving opossum, have slowly moved their ranges into the northern United States. A good many central European species of animals have been shifting their ranges northward into Scandinavia, Greenland, Iceland, and the Faero Islands. Twenty-five species of birds alone are reported to have invaded Greenland from the south since 1918 (Jensen and Fristrup, 1950). Codfish from the Atlantic have replaced the seals in the waters along the coast of Greenland. It is reported that compared to a shipment of 5 tons of codfish from Greenland in 1913, the 1946 shipment had risen to over 13,000 tons; the Greenland Eskimos have become cod fishermen instead of seal fishermen (Kimble, 1950). Farther south tunafish have moved northward into the waters off New England, and tropical flying fishes have become increasingly common off the coast of New Jersey.