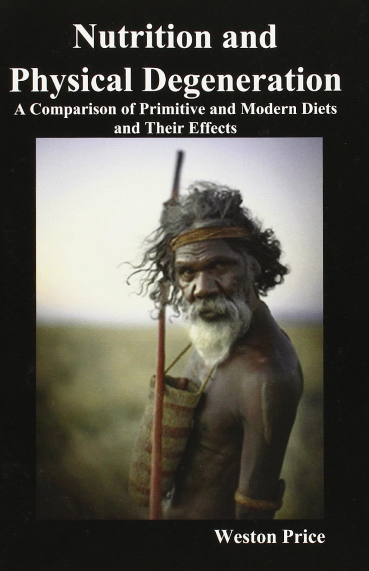 Nothing is more dangerous than bad science driven by arrogance. Readers here are very much aware of this when it comes to climate science. Yet, as surprising as it may sound, the problem of junk science is even far worse in the field of Nutrition.

Recently I read a book written by Dr. Weston Price, published in 1938 – almost 80 years ago: Nutrition and Physical Degeneration.

Weston Price was an American dentist who had been shocked by the wave of physical degeneration he observed among patients, who suffered tremendously from caries and facial deformities, along with the number of crippling diseases that seemed to accompany it.

To find out what was happening, he journeyed to many remote regions across the globe to study “primitive” tribes and people who were still isolated from “modern” living. What he found was stunning and revealing: These people were in tremendous physical and mental condition. He observed that physical degeneration had little to do with genetics, was mostly nutrition-based, and that it took only one generation to turn a physically superior community of people into a health and societal basket case.

He journeyed to isolated areas of the globe where the so-called “primitive” people relied on their own local natural food sources and customs for nourishment and health. Their practices had been perfected over generations. Price examined tens of thousands of teeth, facial forms, dental arches of not only living persons, but also of exhumed skulls. He found near dental perfection and few modern diseases among them. Health was at an impeccable level.

No matter if it was a community in Switzerland or Polynesians in the South Pacific, those who relied on their traditional food staples were in a state of excellent health and near physical perfection.

Throughout the book Price describes natives of great physical strength, well-being, keen intelligence and near zero crime rates within their communities. Cancer, heart disease and metabolic syndrome – our modern diseases – were almost non-existent.  But as soon as these peoples and tribes came into contact with western “modern” nutrition, their health deteriorated rapidly and dramatically.

What follow are sample photos of what Dr. Price typically found. It did not matter where or what race he examined. They were all healthy and shared a common denominator: excellent animal-based nutrition.

Isolated communities living on “primitive” diets had near perfect health. Rates of caries were close to zero. Shown above is a sample of people from various locations around the globe. Modern diseases were rare. Photos: Weston Price Foundation

It was only when the “modern” western foods of “civilization” – comprising in large part sugar, white flour, syrups, polished rice and canned goods – were introduced by the whites did a profound and rapid deterioration in the health of these isolated tribes and groups take place.

Price often observed parents of superior physique, facial form and dental health –  but whose children had been ravaged by caries, deformed dental arches and poor health because they had switched to the “modern foods”.

As was common back in the early 20th century, “experts” often blamed the facial deformities and poor health on race mixing. Another scientific debacle.

What follows is a table showing a selection of isolated, “primitive” tribes and peoples that Price studied, and who had robust physiques and health. Note the very low rates of caries – all without the need for “modern” dentistry. 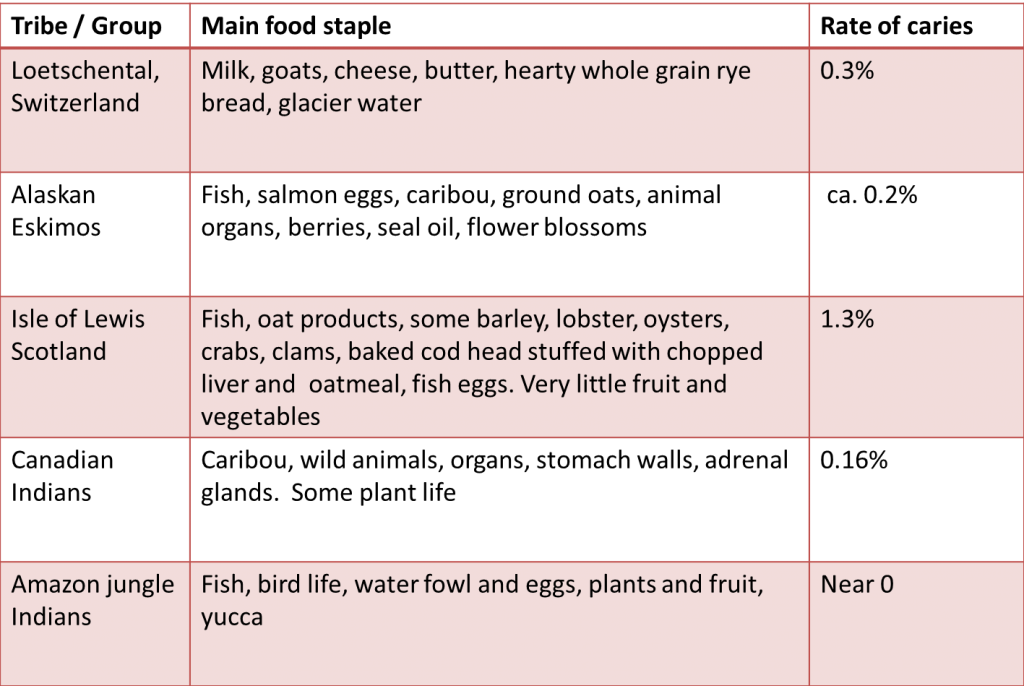 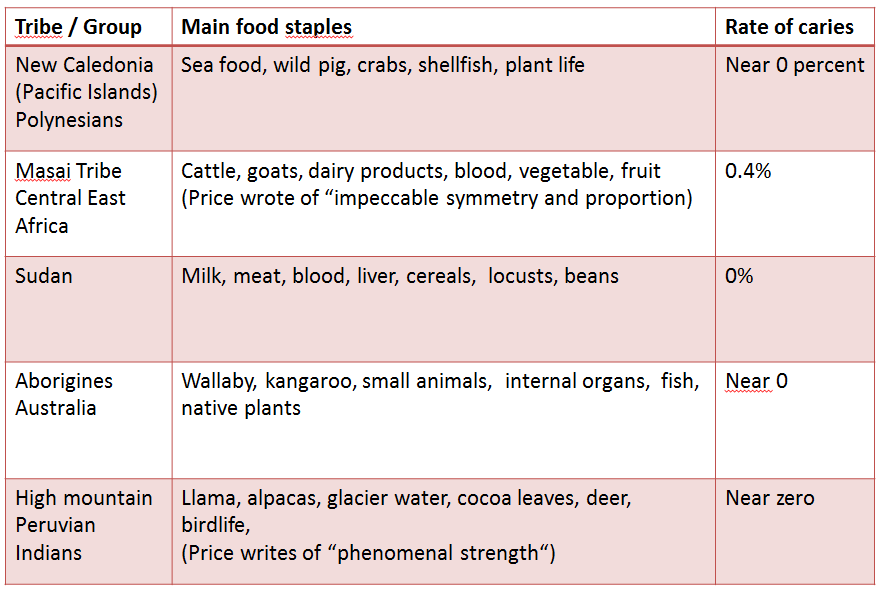 The above table is just a sampling of many tribes and peoples Price studied.

When we look at the above tables, it is clear that one thing stands out: The common food staples necessary for good health are in large part made up of natural, animal-based foods such as fish, shellfish, organ meat, animal fat, dairy, vegetables, plant life, insects and some fruit.

In short: their diets were as remote of a vegan or vegetarian diet as one could possibly get. Price writes that many of these tribes and peoples also had advanced medical, veterinary and engineering skills, which also were lost since the invasion of “modern” junk food.

The key component to these healthy individuals was animal product. Price confirmed it in his book.

Western society is deep in the Nutrition Dark Ages

It becomes clear that our modern nutrition has completely diverged from what the human species was originally designed to consume. Worse, it is evident that modern nutrition risks diverging even further away as junk diet fads such as veganism are being promoted as the way to health. Here many greens are unwittingly advocating the worst of both worlds.

The truth today, as Price reveals, is that our modern society is deep in the Dark Ages of Nutrition and it’s going to take a lot of time, effort, education and resources to crawl back out of that abysmal pit. Unfortunately many more tens of millions in western society will further suffer from the ravages of our “modern” food before things get better. The burden risks collapsing our entire society if something is not done soon.

Of course no one advocates returning to “primitive” life standards. But why isn’t it possible to integrate the advanced nutrition of these isolated natives with our modern society?

Today tens of millions are suffering and dying from metabolic syndrome and its related diseases. Hundreds of millions more are at high risk. It is one of the great scientific catastrophes of human history.

What is needed is a Nutrition Renaissance – and quickly.