Dr. Sebastian Lüning writes at the Die kalte Sonne site that alarmist climate scientist Stefan Rahmstorf has been shown to be wrong with his idea of a weakening Atlantic Current. It turns out that natural factors are dominating. 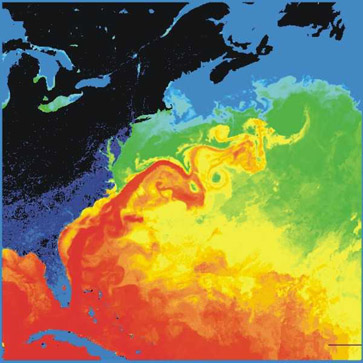 Bitter defeat for Stefan Rahmstorf: Weakening of the Atlantic Current from 2004 to 2014 has natural causes
By Sebastian Lüning and Fritz Vahrenholt
(German text translated by P Gosselin)

Stefan Rahmstorf had to deal with a bitter defeat over the past few days. His idea that the Atlantic Current would gradually come to a standstill due to man-made CO2 emissions has once again been falsified.

A team of scientists led by Laura Jackson were able to show in a paper published in Nature Geoscience that short-term fluctuations of the Atlantic Current were the result of natural cycles. On May 23 2016 Climate Central reported on a study:

Abrupt Atlantic Ocean Changes May Have Been Natural

Climate change may not have been to blame for an abrupt recent slowdown of a sweeping Atlantic Ocean current, a change that delivered an intense pulse of ocean warming and sea level rise through the Gulf of Maine and elsewhere along the East Coast.
Modeling-based analysis by British scientists, published Monday in Nature Geoscience, concluded that the decline in the Atlantic meridional overturning circulation (AMOC) from 2004 to 2014 was “part of decadal variability of the North Atlantic,” representing a recovery following a previous strengthening of its currents. […] The findings were based on analysis of data from Met Office weather forecasting models. They were generally welcomed by other scientists, who said they point to the powerful role that the whims of nature can play on the ocean cycle — even as greenhouse gas pollution causes ice sheets to melt, which prior research has shown is causing the circulation to slow overall. The decline we’ve seen is much larger than we would have expected just from increasing greenhouse gases over the last decade,” said Tom Delworth, a climate scientist with the National Oceanic and Atmospheric Administration and Princeton University. He wasn’t involved with the study.

The entire article can be read at Climate Central. The following is the paper’s abstract:

Recent slowing of Atlantic overturning circulation as a recovery from earlier strengthening
The Atlantic meridional overturning circulation (AMOC) has weakened substantially over the past decade1. Some weakening may already have occurred over the past century2, and global climate models project further weakening in response to anthropogenic climate change3. Such a weakening could have significant impacts on the surface climate4. However, ocean model simulations based on historical conditions have often found an increase in overturning up to the mid-1990s, followed by a decrease5. It is therefore not clear whether the observed weakening over the past decade is part of decadal variability or a persistent weakening6. Here we examine a state-of-the-art global-ocean reanalysis product, GloSea5, which covers the years 1989 to 2015 and closely matches observations of the AMOC at 26.5° N, capturing the interannual variability and decadal trend with unprecedented accuracy. The reanalysis data place the ten years of observations—April 2004 to February 2014—into a longer-term context and suggest that the observed decrease in the overturning circulation is consistent with a recovery following a previous increase. We find that density anomalies that propagate southwards from the Labrador Sea are the most likely cause of these variations. We conclude that decadal variability probably played a key role in the decline of the AMOC observed over the past decade.”