Now the latest on the French government disappearing a skeptic project from a climate contest.

In a contest that is set up to find the best solutions to a “problem”, it is not always wise to propose irrefutable scientific evidence that shows the “problem” does not even exist, and thus making the contest a waste of money and resources…and especially if your chances of winning are good!

As reported on several occasions already at this site, the French government is holding a competition that allows people to vote via the Internet to support projects on climate change. Our Medieval Warm Period (MWP) Map was among the voting. The voting runs from June 6 to July 6, 2016. Many readers have already cast their votes. We would like to thank these readers for their support. Also internationally there has been vibrant interest for the project after notrickszone.com reported on the contest.

Unfortunately we must inform you that all votes cast for the MWP project up to now have been declared invalid by the French Federal Ministry for Environment, Energy and the Oceans. One week after voting began on June 13, 2016, we received a letter from the Ministry stating that the project had to be taken out of the competition. Reason: It did not fulfill the criteria of the competition. It was signed by the French General Commissar for Sustainable Development. You can see a copy of the original letter below, which we provide in its entirety in the spirit of sustainable transparency. Since then only an error message appears at the original project page of the ‘100 Projects for the Climate’ site.

On the background for the reasons behind the move, one can only speculate. Presumably the MWP Map project received such a great number of votes that the organizers got scared and panicked. Obviously public demands a scientific clarification of the pre-industrial climate development, which up to now has not been available to this degree of detail and user-friendliness – despite the millions that have been poured into climate research. Obviously it is not a welcome development that the natural warm period of 1000 years ago would get such attention. Thus someone had to pull the emergency brake, and quickly sweep it all under the carpet and hope no one notices. Not exactly very tactful.

Moreover, the MWP Map has recently revealed something quite interesting for France: Except for Southern France and the French Alps, there has been an embarrassing data gap on French climate history of the past 1000 years. Note that the data recording for France has already been concluded for our first round.

We don’t anticipate further studies to be plotted for France. Does someone wish to cover up this inconvenient situation? Even worse: All studies with temperature results have found a really warm MWP (red points). From a hydrological standpoint, the MWP was a dry period with reduced precipitation (yellow points). Click on the points for France to find details about the studies:

With respect to the large data gaps for France and the large importance of the MWP Map, in a letter to the Ministry we will kindly request alternative support outside the scope of the ’100 Projects for the Climate’. The start of a new cooperation?” 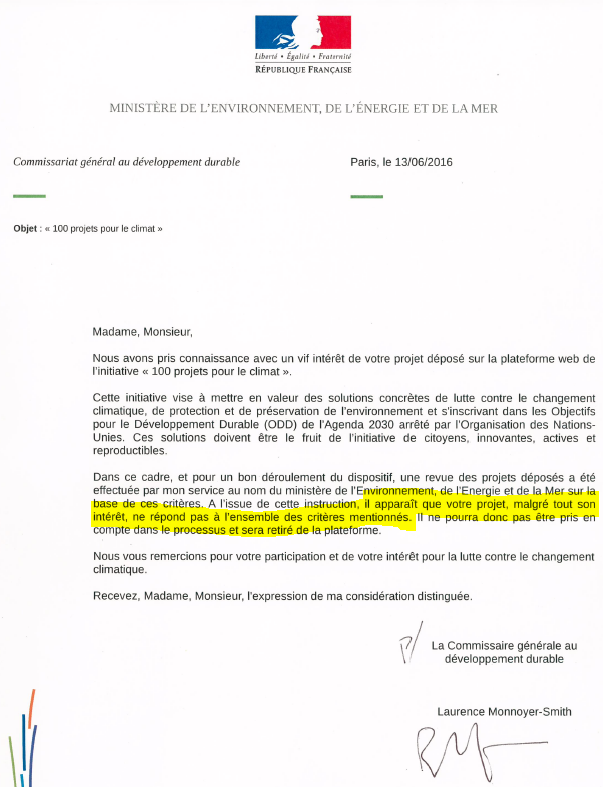 We have taken notice with great interest of the project you submitted on our web-platform concerning the initiative: “100 projects for the climate”.

This initiative aims to put value on concrete solutions to combat climate change, protect and preserve the environment, and falls on the objectives for sustainable development of Agenda 2030 put forth by the United Nations. These solutions should be the fruit of the imitative of citizens, innovative, active and reproducible.

Within this scope, and for a smooth processing, a review of the submitted projects was conducted by myself on behalf of the Ministry of Environment, Energy and the Oceans based on the criteria. Using this guideline it appears that your project, despite all the interest shown in it, does not fulfill the mentioned criteria. Therefore it may not be included and will be removed from the web platform.

We thank you for your participation and your interest in the fight against climatic change.

The Commissar General for Sustainable Development