The conceptualization of “global warming” has become so entrenched in the lexicon that few give much thought to its dubious derivation.

Many assume that “global warming” actually means that all or nearly all of the globe is warming as a consequence of the “well-mixed” greenhouse gases in the atmosphere (i.e., CO2 concentrations have indeed reached right about 400 parts per million from the Arctic to Antarctica, or all across the globe).  In reality, however, only parts of the globe have been warming.  Large regions of the Earth have seen stable or falling temperatures in recent decades, or even dating back to the mid-20th century, when anthropogenic emissions have been claimed to have caused most climate changes.

The only means by which it could be said that we have had global-scale warming is to presume that only the overall net temperature difference counts – for all the regions of the world added together.   The regions of the world where it has not been warming necessarily do not count in the “global warming” conceptualization.

Let’s say that Greenland has warmed by 1.2° C since 1979, but Antarctica has cooled by -0.9° C since 1979. Would it be misleading to add these two regions together and claim that the poles have warmed by tenths of a degree in the last 37 years?   Yes, because one pole has not been warming, but cooling – even though both poles are subjected to the same atmospheric CO2 concentrations.   But this mischaracterization of temperature trends (effectively claiming that both poles have been warming when only one has) is precisely what is done in framing the “global warming” conceptualization.

As a prototypical example of “global warming” manufacture, consider  the recently published Riser et al. (2016) paper entitled, “Fifteen years of ocean observations with the global ARGO array” (below).  The 25 authors summarize the temperature changes in the 0-700 m near-surface layer for all the ocean regions combined since 1950.  They point out that the Pacific Ocean all the way “from Chile to Alaska” has cooled by -1° C during the last 65 years. Other parts of the oceans have warmed by 1° C to compensate.  And when all the cooling and warming regions of the oceans are added together, the warming regions barely win out, scoring a net gain of “nearly 0.2°C” since the mid-20th century.  So because the net temperature change has been slightly positive, it can technically (albeit misleadingly) be said that the global oceans have been warming.  This way, the large regions of the oceans that have been cooling can be buried and ignored, and the “global warming” conceptualization remains intact.

“Most regions of the world ocean are warmer in the near-surface [0-700 m] layer than in previous decades, by over 1° C in some places.  A few areas, such as the eastern Pacific from Chile to Alaska, have cooled by as much as 1° C, yet overall the upper ocean has warmed by nearly 0.2° C globally since the mid-twentieth century.”

Of course, when addressing periods of climate history, such as the Medieval Warm Period, the same advocates who now say modern warming has been global and synchronous insist that the evidence shows the Medieval Warm Period was only warmer than now in Europe, or in Greenland, but the rest of the world didn’t warm. This is false — hundreds of peer-reviewed scientific papers have documented evidence of warmer temperatures during Medieval times throughout vast regions of the Earth, including in Antarctica.   But if the standard is that the warming must be ubiquitous to “count” as global warming, then the modern era fails that standard miserably.    Because the globe is not warming.  Only some regions are.  Other regions haven’t warmed in decades, or have been, in fact, cooling.

Below is of highlighted summary of the scientific literature (over 30 peer-reviewed papers) documenting some of the regions of the world where there has been no detectable warming trend during the period of time that anthropogenic CO2 emissions have been claimed to have dominated climate changes (generally since the mid-20th century).  As the scientists indicate, large portions of the Pacific, Atlantic, Indian, and Southern Oceans have been cooling in recent decades.   There is also scientific documentation of recent (20th/21st century) cooling (or no long-term warming trend) in the southeastern U.S., Northern Europe, Antarctica, China, Canada/Canadian Arctic, Western South America (Chile), South Africa, Greenland, Iceland, Antarctica, and the Arctic.   One has to wonder how and from where a large net “global warming” signal could have been obtained when there has been so much regional cooling.

Perhaps it can be explained why temperature changes since the 20th century have been called “global warming” caused by anthropogenic CO2 emissions when large regions of the globe have not been warming, but cooling, for the last several decades.  Do uniformly rising CO2 concentrations cause cooling in some places, and warming in others — or warming in some decades, and cooling in others?  If so, what is the scientific basis for this selectivity?

Discussion: “Over the 20 yr of the present ECCO state estimate, changes in the deep ocean on multiyear time scales are dominated by the western Atlantic basin and Southern Oceans. … In those same regions, a longer-term general warming pattern occurs below 2000 m. A very weak long-term cooling is seen over the bulk of the rest of the ocean below that depth, including the entirety of the Pacific and Indian Oceans, along with the eastern Atlantic basin.“

The eastern tropical Pacific Ocean has cooled since 1979.

“Here we show that since 2005 a large volume of the upper North Atlantic Ocean has cooled significantly by approximately 0.45 °C or 1.5 × 1022 J, reversing the previous warming trend. … The observed upper ocean cooling since 2005 is not consistent with the hypothesis that anthropogenic aerosols directly drive Atlantic temperatures.”

The Southern Ocean has been cooling overall since 1979 (by about -1.0°C), which has led to an increasing sea ice coverage not simulated by models.

The southeastern United States has been cooling since 1895.

The 20th century cooling trend over the southeastern United States

“Portions of the southern and southeastern United States, primarily Mississippi, Alabama, and Georgia, have experienced century-long (1895–2007) downward air temperature trends that occur in all seasons.”

In Kentucky, there has been no statistically significant warming or cooling trend since 1950.

“[B]roadly speaking, mean annual temperatures in Kentucky have not demonstrated a statistically significant trend with regard to time [during 1950-2010].”

“Three time series of average summer daily maximum temperature (TMax JJA) are developed for three interior regions of Alabama (AL) from stations with varying periods-of-record and unknown inhomogeneities. The time frame is 1883-2014. … Varying the parameters of the construction methodology creates 333 time series with a central trend-value based on the largest group of stations of -0.07 °C decade-1 with a best-guess estimate of measurement uncertainty being -0.12 to -0.02 °C decade-1.”

Temperatures in Scandinavia have been cooling overall for the last 2,000 years.  The recent warming, which peaked in the early 1940s and cooled thereafter, has been well within the range of natural variability and has not offset the overall cooling trend.

“Britain has experienced a drop in temperature of about 0.5°C since the early years of the millennium at a time when world temperatures have remained virtually stable”

Northern Norway has been cooling since the 1940s peak. 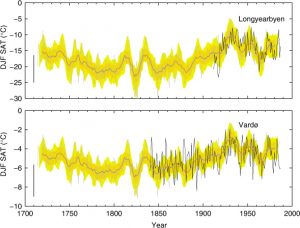 The Antarctic Peninsula has been cooling since the late 1990s at a statistically significant rate.

“For East Antarctica, no general warming and increase in precipitation is found in surface observational data (Turner et al., 2005; Monaghan et al., 2006, 2008). … We conclude that, in the last 2 centuries, conditions in the interior DML [Dronning Maud Land, East Antarctica] have been fairly stable and only weakly influenced by changes in atmospheric dynamics.”

The Antarctic continent as a whole has been cooling since the 1960s.

“[O]ur spatial analysis of Antarctic meteorological data demonstrates a net cooling on the Antarctic continent between 1966 and 2000, particularly during summer and autumn. The McMurdo Dry Valleys have cooled by 0.7 °C per decade between 1986 and 2000, with similar pronounced seasonal trends.”

“In this study, observed temperature records of 12 stations from Antarctica Island, Coastline and Continental areas are analyzed by means of detrended fluctuation analysis (DFA). … [W]e find .. most of the Antarctic stations do not show any significant trends over the past several decades”

Chile has been cooling since the 1940s. 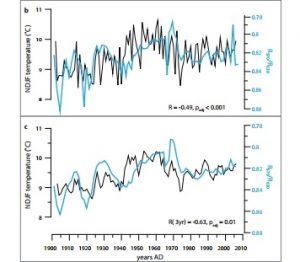 Temperatures in northwest China have not shown a warming trend in the last 368 years.  It was warmer than now in the 1600s and 1700s.

Glaciers in northwestern China have been stable to slightly advancing in the 21st century.

“‘Pamir–Karakoram–Western-Kunlun-Mountain (northwestern Tibetan Plateau) Glacier Anomaly’ has been a topic of debate due to the balanced, or even slightly positive glacier mass budgets in the early 21st century.“

The Canadian Arctic (northeastern North America) was warmer than now in the early 1800s, and throughout the 1000 to 1200 AD period, with no significant warming trends outside the range of natural variability in the last 200 years.

British Columbia (Canada) temperatures have been stable, with no warming trend, throughout 1900-2010.

South Africa‘s surface air temperatures have been stable for the last 200 years, with as-warm or warmer temperatures in the 1800 to 1860 period.  Temperatures warmed more rapidly (~1.5°C in 50 years) between 1720 and 1770 than they have at any time since.

Prior to the mid-1990s, Greenland had been cooling overall since the 1940s — a 50-year cooling trend despite a rapid increase in CO2 emissions during the 1940s to 1990s period.  It was only after the mid-1990s that Greenland temperatures began rising in concert with CO2 concentration increases.

“Reconstructions indicate that Greenland temperatures did not begin to follow hemispheric greenhouse gas warming patterns until the mid-1990s. This discrepancy indicates either that the warming hiatus was associated with internal climate variability, or that the simulations are missing processes important to Greenland climate.”

“An Analysis of the Icelandic Climate since the Nineteenth Century” 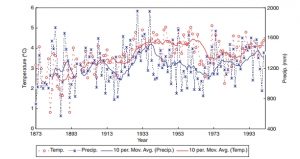 “In particular, we do not observe the large surface warming trends predicted by models; indeed, we detect significant surface cooling trends over the western Arctic Ocean during winter and autumn. This discrepancy suggests that present climate models do not adequately incorporate the physical processes that affect the polar regions.”

Conclusion: “The lack of widespread significant warming trends leads us to conclude that there is no strong evidence to support model simulations of greenhouse warming over the Arctic Ocean for the period 1950-1990.  Our results, combined with the inconsistent performance of model simulations of Arctic climate indicate a need to understand better the physical processes that affect polar regions, especially atmosphere-ice-ocean interactions, ocean heat transfer and cloud radiative effects”

There have been no net temperature changes in the Arctic Atlantic since 1940 (graph A), with abrupt cooling between 1940 and 1995 (graph B, far right).

“Pairwise comparisons to reconstruct mean temperature in the Arctic Atlantic Region over the last 2,000 years”