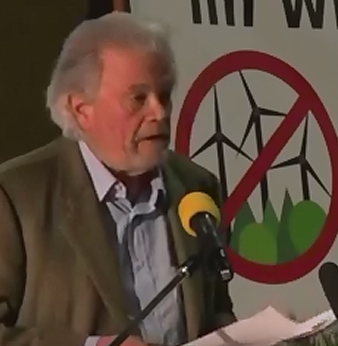 German public television ARD here has a report on how one of Germany’s leading environmentalists has been getting death threats because of his opposition to the destruction of forests by wind parks.

According to the ARD, Enoch zu Guttenberg claimed:

I am getting even threats to life and limb, that is death threats: If you keeping talking so, then you won’t live past next week. Over the past two years I’ve gotten four or five of these threats to life and limb. Either I’d better shut up, or be beaten into silence. Most of the time the threats were made in block letters from headlines from newspapers.”

Enoch zu Guttenberg, who is also a symphony conductor, says the threats have usually come soon after comments made in public, opposing wind parks.

The ARD reports zu Guttenberg is a active protester of what he and many others view as “an unprecedented destruction of cultural landscape” and “a threat to endangered wildlife“.

Also the Berlin Journal here describes how zu Guttenberg “is up against a wind power lobby that would brutally ram through its business interests, as leading politicians have confirmed”. The Berlin Journal quotes top politician Michael Fuchs of Angerla Merkel’s CDU party, who commented at an ARD news show:

Also conomics and energy spokesman of the CDU/CSU fraction Joachim Pfeiffer spoke of the pressure bearing down on local politicians and how the wind power industry is acting “very aggressively”.

Death threats and the trampling of local opposition by “green energy” have very little to do with protecting the environment, and almost everything to do with an industry brutally doing whatever it can to make quick and easy money. Though disguised and being green, it’s crony capitalism at its worst.