Browse: Home / 2016 / September / 07 / Germany’s Media Sobering Up To The Widespread Corruption Of The ‘Energiewende’ and Wind Lobby

Meet the Schmidt’s in northern Germany. The family, like many Germans, once welcome wind turbines and viewed them as a responsible way to produce energy in an environmentally and climate friendly way. Today the ARD reports that they have long changed their minds ever since their home has since become surrounded by industrial wind parks in all directions. “They no longer recognize their landscape.”

They are the victims of a corrupt but powerful industry. 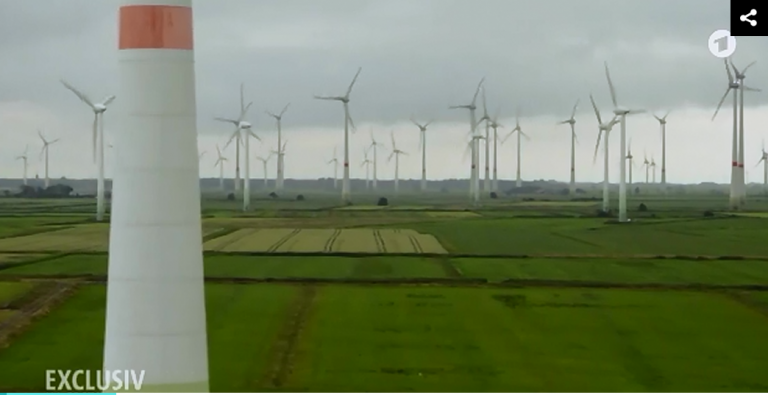 According to the ARD, wind park developers are simply steamrolling over local residents who oppose them, and installing the giant machines less than a few hundred meters away from homes, and many natural places where they don’t belong.

And even though there is no longer a demand for wind power in northern Germany, windparks continue to be built. Often turbines are shut down so as to not overload the grid (but they get paid no matter if they run or not – which is why they keep getting built).

At the 4-minute mark, one community in south Germany (Erlangen) actually installed wind turbines where there is not even enough wind for them to make a profit. Here the message of being “green” (and making easy money at consumers’ expense) trumps common sense. The madness knows no end. And there are plans to build even more in the area.

With all the madness, the ARD reporter says at the 5:30 mark that it’s no wonder that trust in wind parks is disappearing in Germany. Another problem, the report states, is that often wind parks are approved by politician’s who have a direct interest and business dealings in them, meaning the industry is rampant crony capitalism – the very kind that Germans are typically famous for opposing. For example Rannungen mayor Fridolin Zehner had a wind turbine built where none is supposed to be built – on his own land – thus allowing the honorable mayor to cash in on lucrative leasing fees – to the tune of 10,000 euros annually.

The same type of sweet deal was worked out by town councilman Egon Sendelbach in Urspringen. Germany-wide local politicians and twoncouncilmen are profiteering from windparks at the full expense of the citizens and the common good. Sendelbach tells ARD he has no problems with it.

An ARD investigation uncovered that dozens of communities across Germany are seeing local politicians profiteering from dubious wind park permitting. According to law professor Michael Frey:

Research shows that we have a massive problem with the help-yourself” mentality when it comes to the zoning of wind parks. Many mayors and town councils vote in a way where they themselves profit. The extent of the problem is frightening and is nationwide.”

ARD calls it the “dirty business with clean energy.”

Back to northern Germany, the ARD focusses on the required setback distances from residential homes. That distance varies from state to state. Unfortunately in the Friesian region of Germany, wind parks can be built “right up close” to homes. Here the report features one family that is no longer able to sleep well at night due to the noise of the nearby turbines. Some wind turbines are even being installed in the middle of forests, which leads the ARD to ask “What’s with environmental protection?”

Harry Neumann is a former head of BUND, one of Germany’s leading environmental protection groups. However he left the organization in protest, telling that the BUND is completely in bed with the wind industry, with top BUND officials even directly involved in the wind industry lobby. The depth and scale of the conflicts of interest and downright corruption is stunning. Former BUND member Stephan Schlitz: “In my eyes, the BUND has lost its credibility as an environmental organization.”

Consumers can no longer afford electricity

At the 20-minute mark, the ARD focusses on who ends up paying for the wind energy bonanza: the struggling consumers (like Nina Albig) who are seeing their electric bills skyrocket.

Albig has seen her electric bill double since 2008 and is no longer able to afford it. Now the power company is threatening to cut her power off. Like so many other Germans who used to support rescuing the climate, she is “having doubts about the Energiewende“.

But Germany’s Green Party refuses to believe any of it. In Berlin the Greens and the wind industry loudly protested the government’s recent plans to scale back the wind energy subsidies and support. Green Fraction Chairman Anton Hofreiter bellowed at the rally:

We need the wind turbines in order to save the foundations of our life, to rescue this planet, and our children!”

Increasingly persons like Hofreiter are finally beginning to be depicted by the ARD and Germany’s once ultra-green media as the charlatans of yesterday, still peddling snake oil that has long lost its magic.

It turns out that at the protest rally in Berlin most of the protesters who showed up were wind industry workers who were paid a day’s wages to show up – travel and accommodation costs included. Also speaking at the rally was the BUND itself.

Top CDU politician Michael Fuchs sums it up on the wind industry lobby:

Germany’s once loved wind industry is now looking more and more like a hated villain.