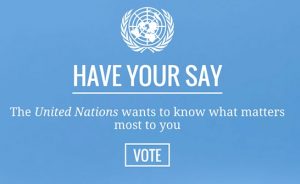 Over the last few years, the United Nations has been conducting an online poll, asking the world’s citizens —well, those fortunate enough to have access to electrical power, a computer, and the internet — what is most important to them, what concerns them most, or what issue they view as the highest priority for action.

In all, there are 16 priorities to choose from, ranging from phone and internet access to building more roads, protecting rivers and forests, better health care, etc.

Over 9.7 million people across all nations and age groups and educational and income levels have voted so far.  And, shockingly, of the 16 listed priorities for action, “Action taken on climate change” ranks a distant 16th, or last.

The world’s citizens are more concerned about access to paved roads and phones than they are about taking action to combat the greatest threat facing mankind.

Sadly, even citizens of wealthy countries couldn’t care any less than they do about climate change as an issue.  In the U.S., for example, in a Gallup poll ranking the levels of concern about 15 pre-selected, randomly-ordered national problems, “Climate Change” again comes in a distant last place. 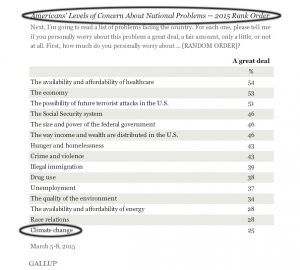 Maybe there needs to be more analysis that says Antarctica will soon be the only place on the planet to live if we don’t start fighting climate change.  That could garner enough attention to move up a notch or two in the polls.

Beer is quite popular nearly world-wide.  What if there were more stories that affirm global warming will make beer taste worse?   It might make a difference.

Just about everyone loves a savory steak dinner.  If scientists can again demonstrate that global warming makes steak taste worse, that might stir the public to join in the climate change fight.

Music soothes the soul.   If music sounds worse because of global warming, scientists could emphasize this over and over again.  This could be persuasive — especially among the youths.

Dogs are humans’ best friends.  Observers have found, though, that global warming leads to boredom and even depression in dogs.  If the link between warmer temperatures and dog depression becomes more widely known, some dog-lovers might be willing to pay up.

When it comes to alarming the public about the consequences of climate change, the status quo hasn’t been working.  More alarmism must be needed.

After all, we’re facing the greatest threat in the history of mankind — and people across the world care much more about roads and phones and internet access than they do about the end of life as we know it on this planet.