Breitbart London: “Full Extent Of Skullduggery” By “Cabal Of Lying Climate Alarmists” Has Been Uncovered”!

Kenneth Richard’s post from yesterday on how a small group of alarmist scientists tried to whitewash away the global cooling scare of the 1970s has been making some waves.

Not only was it made the top headline at Climate Depot, but also James Delingpole at Breitbart London here has written a scathing piece about the fraudulent, totalitarian tactics used by the climate alarmists to erase history and to rewrite it. 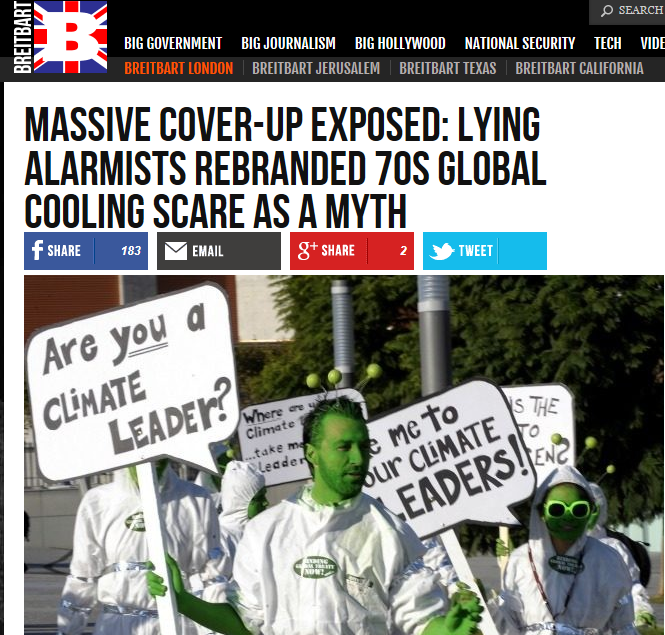 Everyone knows that before the global warming scare began in the 1980s, scientists were much more worried about global cooling and the coming ice age. At least everybody did till a cabal of lying climate alarmists – one then a senior administrator at NOAA, now a president at the World Meteorological Association – hijacked Wikipedia, published a lying paper, and rewrote history by painting the 1970s Global Cooling Scare as an urban myth.

Now the full extent of these activists’ skullduggery has been uncovered by researcher Kenneth Richard, writing at No Tricks Zone.“

Delingpole writes that the cover-up of the global warming consensus of the 1970s and 80s was so extensive that a Google search yields little on scientists being concerned over global cooling and that it “makes a mockery of Jimmy Wales’s oft-expressed desire to reduce Wikipedia’s outrageous left-wing bias.”

He also slams William Connelley for abusing “his Wikipedia administrator status by rewriting thousands of Wikipedia articles in order to give them the ‘correct’ alarmist spin.”

Climate science, in Delingpole’s view, has become so corrupt that he concludes his piece by stating that “the main requirement for thriving in the world of climate science is the personality of a psychopath.”

14 responses to “Breitbart London: “Full Extent Of Skullduggery” By “Cabal Of Lying Climate Alarmists” Has Been Uncovered”!”