Scientific Studies Reveal No Correlation Between CO2 And Ocean Heat Content Variations For 99.975% Of The Last 10,000 Years

“The current eager acceptance of oceanic thermal lag as the ‘explanation’ as to why CO2 warming remains undetected, reemphasizes that the atmosphere cannot warm until the oceans do. The logical implication follows that most current climate models are lacking in relevance; they have not been constructed with ocean surface temperature as the fundamental variable. When the problem is attacked from this view, sensitivity to CO2 is significantly reduced; a position also strongly supported by the available palaeoclimatic data.”  — Ellsaesser, 1984 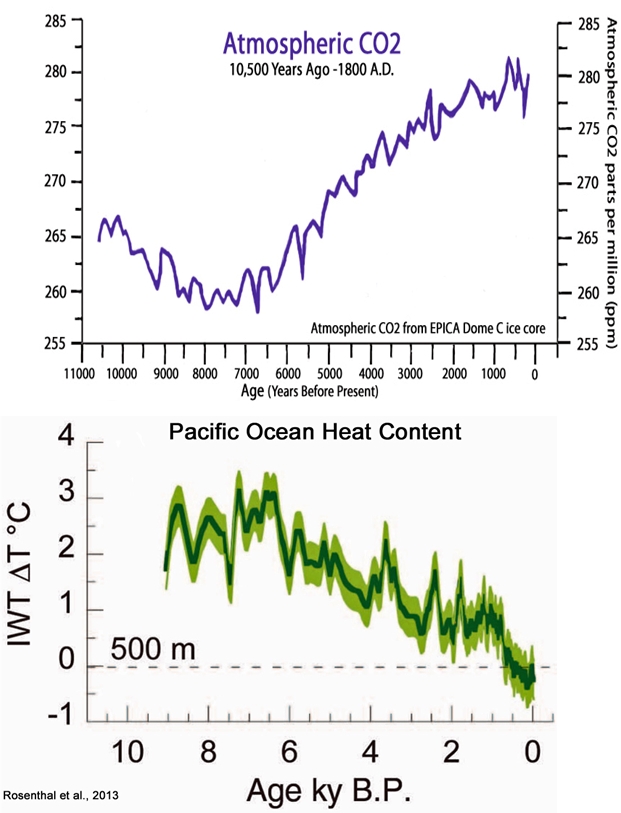 According to the IPCC (2013), 93% of the heat energy change from global warming can be found in the oceans (AR5, Chapter 3).  Only a tiny fraction of climate change can be accounted for in the atmospheric record, as the heat capacity of the oceans is more than a thousand times greater than the heat capacity of the air.  In other words, the widely-publicized surface air temperature change of about +0.6° to +1.0°C since the 19th century is not the main barometer of whether or not global warming has occurred – – and if it has, by how much.  Global warming (or cooling) is primarily accounted for as a change in ocean heat content, not surface air temperatures.

Climate models that prognosticate what the temperature of the global climate system might be 100+ years from now, or when atmospheric CO2 concentrations reach 560 ppm (doubled pre-industrial levels) are fundamentally flawed, for they presume that CO2 concentration rise (or decline) is a primary determinant of changes in atmospheric temperature change.  It is not.  Because of the magnitude of difference in heat capacity, it is the global ocean that determines the temperature of the air (predominantly), not the other way around.

It therefore needs to be established that (1) CO2 variations and ocean heat content changes are correlated (when CO2 falls, ocean heat/temperatures fall, and vice versa); and if they are correlated, then it still needs to be scientifically established (i.e., via experimental observation and measurement) that (2) ocean heat/temperature changes are primarily caused by CO2 variations.  Just because there is a correlation between two variables does not necessarily mean that one variable is the cause of the other.

So, as mentioned, first we need to establish a correlation before we can even consider causation.  And when it comes to a correlation between CO2 variations and ocean heat content variations, we don’t have one.  According to scientific studies of long-term ocean heat content, for 99.975% of the last 10,000 years, there has effectively been no significant correlation between rising or falling CO2 concentrations and rising or falling ocean heat.  As will be clarified below, the only period in the last 10,000 years in which CO2 and ocean heat/temperatures sharply rose or fell in concert was the period between 1975 and 2000.

Below the 2000 m depth (and 52% of the ocean waters reside below 2000 m), the “entirety” of the Pacific and Indian Oceans as well as the Eastern Atlantic have been cooling for the last few decades, largely off-setting the already modest change in the 0-2000 m layer.

“Over the 20 yr of the present ECCO state estimate, changes in the deep ocean on multiyear time scales are dominated by the western Atlantic basin and Southern Oceans. … In those same regions, a longer-term general warming pattern occurs below 2000 m. A very weak long-term cooling is seen over the bulk of the rest of the ocean below that depth, including the entirety of the Pacific and Indian Oceans, along with the eastern Atlantic basin.” 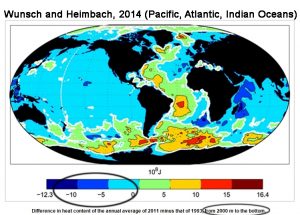 As indicated by the black trend bars, notice (a) the amplitude of the rise for the 1900-2010 period is not as steep as 11 previous decadal- and centennial-scale demarcated warming periods during the last 1,200 years.  Also notice that (b) the overall sharp drop in ocean heat since the Medieval Warm Period ended (encompassing the 1200 C.E. to 1900 Little Ice Age) was not accompanied by a sharp decline in CO2 concentrations, and that the Medieval Warm Period had flat, not rising, CO2 levels,  indicating that CO2 variations could not have been a causal factor in the ocean heat content changes during this entire period (800 C.E. to 1900).  Finally, notice that (c) modern temperatures are still tenths of a degree cooler than they were during the 1300 to 1500 C.E. period, when CO2 concentrations still hovered around 280 ppm.  In sum, the data in this graph indicate that there has been no significant correlation between CO2 and ocean heat temperature variations for nearly all of the last 1,200 years. 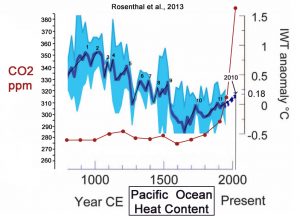 And yes, the non-correlation includes the 1900-2010 period.  There are very few reconstructions of global-scale ocean heat content prior to 1950 available in the scientific literature.  However, in a paper entitled “Consistent near surface ocean warming since 1900,” Gouretski et al. (2012) provide a comprehensive look at available evidence for the near-surface (0-20 m) change in ocean heat content for the early 20th century.  The supplemental graph below (using the available link [red] from the University of Hamburg) was made available upon the release of the paper. 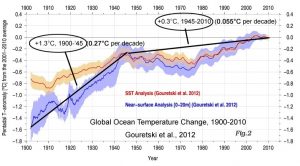 In the paper, Gouretski and co-authors point out that the twenty-first century has experienced a general cooling in large regions of the global ocean — just as anthropogenic CO2 emissions (and atmospheric CO2 concentrations) were rising most dramatically.

“[T]he first decade of the 21st century (2001–2010) was not uniformly warmer than previous decades. Before about 1920, the global ocean was almost everywhere colder than the reference decade of 2001–2010. After 1920, several regions of the global ocean were warmer than the reference decade [2001-2010]. … [A] rather abrupt cooling since the end of 1990s both in the East Pacific (connected to the weakening of El Nino and the shift to the negative phase of the Pacific Decadal Oscillation) and in the Southern Ocean may have contributed to a flattening of the global temperature anomaly series after about 2000. …Decadal mean SST and 0–20 m layer anomalies calculated relative to the reference decade 2001–2010 give evidence of the general warming of the global ocean since 1900. However, large regions of the oceans have experienced cooling since the 1990s. Whereas cooling in the tropical Eastern Pacific ocean is associated with frequent La Nina events in the past decade, the cause of the cooling within the Southern Ocean remains unknown.”

The much larger amplitude and rate of warming that occurred in the early 20th century was not accompanied by a commensurate large change (increase) in anthropogenic CO2 emissions.  In fact, throughout the entire 1900 to 1945 period, human emissions only averaged about 1 gigaton of carbon per year (GtC/yr).  In contrast, human emissions rates rose sharply to 4 GtC/yr by the 1970s, 6 GtC/yr by the 1990s, and over 10 GtC/yr by 2014.  Atmospheric CO2 followed a similar trajectory, as concentrations rose by just 15 ppm in the 40 years between 1900 and 1950 (295 ppm to 310 ppm), whereas concentrations rose by 85 ppm in the 65 years after 1950, including 22 ppm just between the years 2000 and 2010 alone (Feldman et al., 2015) — a decade when near-surface ocean heat “flattened” according to Gouretski et al. (2012).  And despite this explosive increase in human CO2 emissions and atmospheric CO2, the near surface ocean heat content actually cooled between 1945 and 1975, and the rate of warming since 1975 has been much less pronounced than during the 1900-1945 period.

If we were to visually combine the record of the explosive rise in human CO2 emissions since 1945 with the record of near-surface ocean heat content for the entire 1900-2010 period, it would be evident that the only decadal-scale period in which CO2 emissions steeply rose in concert with ocean temperature was during the 25 years between 1975 to 2000.  For 1900-1975 and 2000-2010, there was no obvious correlation between rapidly rising CO2 and ocean heat content. 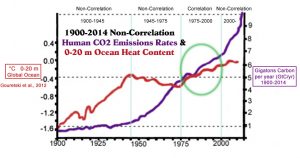 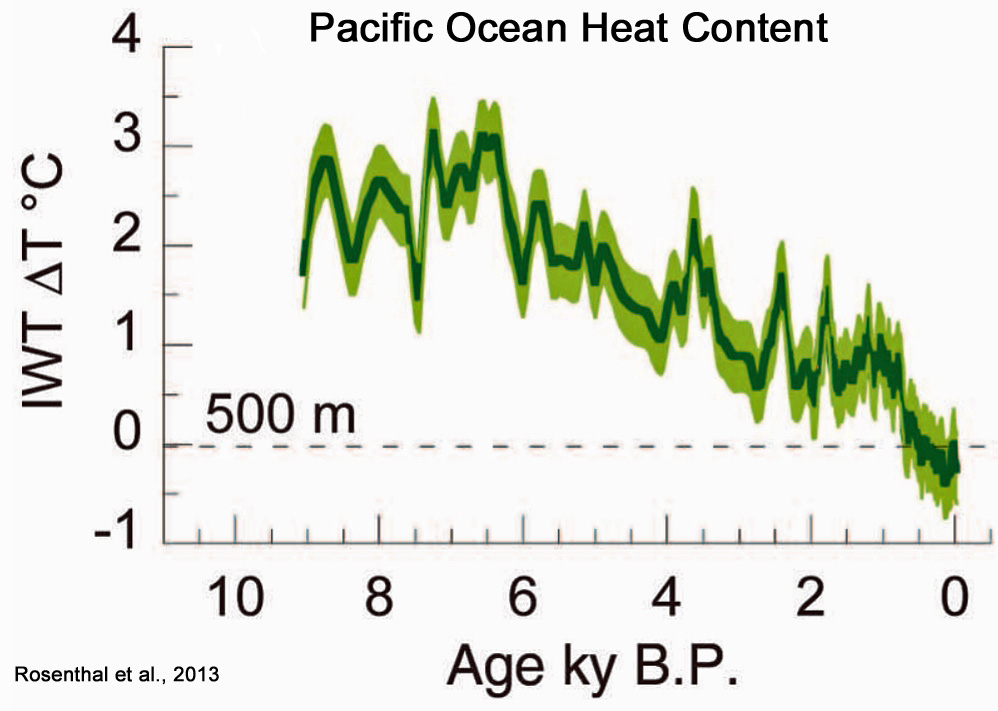 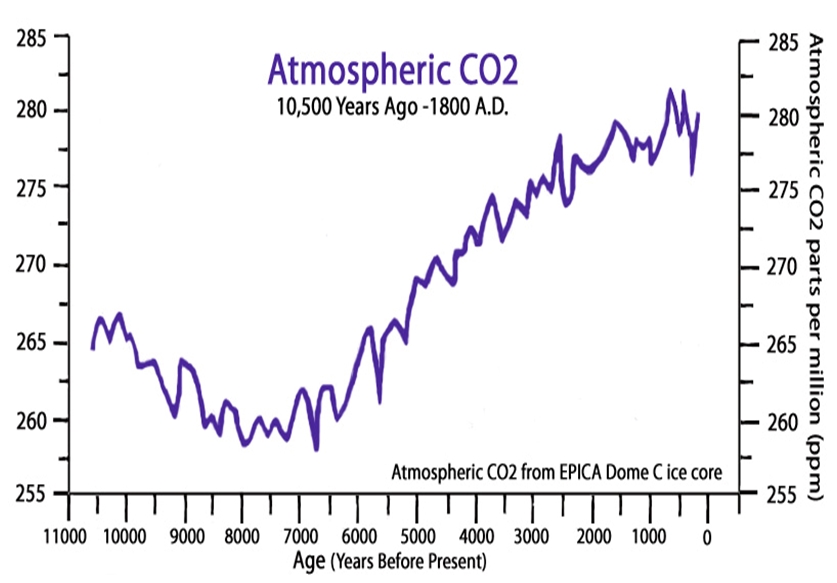 To summarize, in the last 10,000 years, there was one 25-year period (1975-2000) in which CO2 levels and ocean heat content rose in concert.  Other than that, the rest of the last 10,000 years contained no obvious correlation between ocean heat content variations and the rise and fall of CO2 concentrations.  Without a significant long-term (or short-term) correlation between these two variables, we cannot even begin to address the causality question.

Simply put, the presumption that variations in CO2 concentrations cause global warming — net increases in global-scale ocean heat content — has not been established.

83 responses to “Scientific Studies Reveal No Correlation Between CO2 And Ocean Heat Content Variations For 99.97583 Of The Last 10,000 Years”