Warnings Of A “December To Remember” As No. Hemisphere Snow Cover Reaches 2nd Highest Level!

What follows is an interesting chart presented by Joe Bastardi’s Daily Update at Weatherbell Analytics.

There’s been a lot of talk about the current warm weather conditions up in the high Arctic, but little talk about the impressive snow cover over the northern hemisphere and the extreme and vast cold over Russia and Siberia.

What happened is that the cold air mass that’s usually over the pole has split, allowing warm air from the south to make its way to the pole and displacing the frigid air southwards. It’s called weather, which we know can be chaotic at times.

With the cold air moving southwards, it is of little surprise that the phenomenon would lead to greater snow cover over the northern hemisphere. 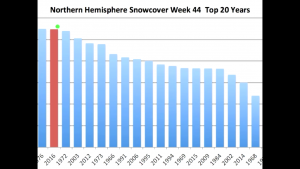 Joe Bastardi says in today’s Daily Update that “there’s lots of snow in the northern hemisphere” and that it will become “more and more prominent” across the northern United States, accompanied by “explosions of thundersnow coming off the [Great] Lakes“.

Joe projects heavy snows across much of the US up until the new year and warns of a “December to remember”.

Meanwhile wetteronline.de here reports on extreme cold over Siberia, with temperatures “20°C below what is normal for this time of the year“, adding: “That means daytime highs of -35°C and lows  down to -45°C.”

Chart of current low temperatures in Siberia here. What follows is the Chart for the high temperatures:

What’s the cause of the extreme Siberian cold?

Wetteronline.de reports that it is due to the “widespread snowfall in October and a subsequent unusual formation of a powerful cold high“.

The German weather site warns that the cold is spreading westwards, and that it is possible a high over Scandinavia forms in the weeks ahead and thus deliver a significant cold blast across Europe.

So, don’t let yourselves be fooled by the mild weather that will grip western Europe in the days ahead.

29 responses to “Warnings Of A “December To Remember” As No. Hemisphere Snow Cover Reaches 2nd Highest Level!”