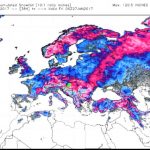 Share this…FacebookTwitterAt today’s Weatherbell Daily Update, meteorologist Joe Bastardi looks at the forecast over the next 15 days for Europe. The following chart depicts the forecast accumulated snowfall by January 27, 2017. Image cropped from Weatherbell 11 January 20017 Daily Update. As the chart makes clear, plenty of winter snow is in the pipeline. The cold that […]

Share this…FacebookTwitterReader Indomitable Snowman sent a link to an AccuWeather report telling us of the intense winter weather gripping eastern Europe and how it has claimed close to 60 lives thus far. German weather site wetteronline.de also reports of close to 60 cold deaths so far from the current Eastern European cold blast. Although we get scattered reports […]