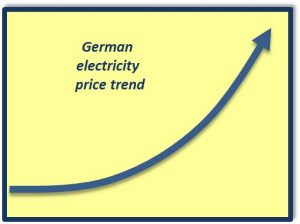 The Frankfurter Allgemeine Zeitung (FAZ) — Germany’s version of the Washington Post — reports here that the country’s Energiewende (transition to green energy) has been fraught with “serious errors” and that the government has lost control of its energy policy.

The FAZ cites a report released by the Bundesrechnungshof (federal accounting office).

The federal accounting office report slams Gabriel’s Economics Ministry, concluding, that it “has no overview of the financial impacts of the Energiewende.” In short, the government has lost control over the project – similarly like it lost control of the construction of Hamburg’s Elbphilharmonie concert hall, which originally had been estimated to cost less than 80 million euros, but wound up costing a scandalous 789 million euros before finishing years behind schedule!

The accounting office report also accuses Germany’s energy policy of being fraught with “serious organizational deficiencies” that are “difficult to comprehend“.

In the earlier days of the Energiewende, proponents such as Green Party member Jürgen Trittin boasted that the green energy project would be affordable, costing the average German citizen about as much as the cost of “one scoop of ice cream each month“. Since then Germany’s electricity costs for consumers have exploded and are now among the highest in the world, averaging near 30 cents per kilowatt hour.

The stability of the supply has also taken a serious hit.

Even worse, the prices of German electricity bare projected to increase substantially over the coming years. The FAZ adds:

The federal accounting office sees a risk that it will get more expensive to advance the Energiewende.”

Germany’s shocking electricity price spiral shows no signs of slowing. A week ago the online Kieler Nachrichten here reported in a separate story that “electric bills for consumers will be significantly higher in 2017” and that if things do not change, prices will continue to rise until at least 2023.