New Paper Indicates Antarctica Has Been Gaining Mass Since 1800

Antarctica Has Been Gaining Ice,

“Antarctica is not currently contributing to sea level rise, but is taking 0.23 millimeters per year away”

For decades scientists have suggested that the effects of a climatic warming would likely lead to an increase in Antarctica’s surface mass balance (i.e., mass gains exceed losses), and this would lead to a concomitant lowering of sea levels.

“The results indicate that a climatic warming will probably lead to a sea-level lowering of some tens of centimetres in the next centuries. This is because for Antarctic conditions the increase in snow accumulation exceeds the increase in melting.”

“According to this mass balance model, the amount of accumulation over the entire ice sheet is presently 24.06 x 1011 m3 of ice, and no runoff takes place.  A 1°C uniform warming is then calculated to increase the overall mass balance by an amount of 1.43 1011 m3 of ice, corresponding to a lowering of sea level with 0.36 mm/yr. A temperature increase of 5.3° C is needed for the increase in ablation to become more important than the increase in accumulation and the temperature would have to rise by 11.4°C to produce a zero surface mass balance.”

“As a general result, it is found that the effect of increased precipitation on Antarctica dominates over the effect of increased melting on Greenland for the entire range of predictions, so that both polar ice sheets combined would gain mass in the 21st century. The results are very similar for both time-slice patterns driven by the underlying time evolution series with most of the scatter in the results caused by the variability in the lower-resolution AOGCMs. Combining these results with the long-term background trend yields a 20th and 21st century sea-level trend from polar ice sheets that is however not significantly different from zero.”

“We present climate and surface mass balance (SMB) of the Antarctic ice sheet (AIS) as simulated by the global, coupled ocean–atmosphere–land Community Earth System Model (CESM) with a horizontal resolution of ∼1∘ in the past, present and future (1850–2100). … CESM [Community Earth System Model] projects an increase of Antarctic ice sheet SMB [surface mass balance] of about 70 Gtyear−1 per degree warming. This increase is driven by enhanced snowfall, which is partially counteracted by more surface melt and runoff along the ice sheet’s edges. This intensifying hydrological cycle is predominantly driven by atmospheric warming, which increases (1) the moisture-carrying capacity of the atmosphere, (2) oceanic source region evaporation, and (3) summer AIS cloud liquid water content.”

“In contrast to Greenland, where increased snowfall currently does not compensate enhanced surface runoff, this increase in AIS snowfall translates almost fully to ice sheet mass gain and mitigation of sea-level rise (Bengtsson et al. 2011; Shepherd et al. 2012). The reason is that rainfall on the AIS remains small, and most of the liquid water produced by surface melt can refreeze in the snowpack. Even in a warmer future, projected surface runoff losses are dominated by mass gains through enhanced snowfall (Ligtenberg et al., 2013).”

“The central Antarctic sites lack coherency and are either not representing regional precipitation or indicate the models inability to capture relevant precipitation processes in the cold, dry central plateau. The drivers of precipitation are reviewed for each region and the temporal variability and trends evaluated over the past 100, 200 and 1000 years. Our study suggests an overall increase in SMB [surface mass balance] across the grounded Antarctic ice sheet of ~ 44 GT since 1800 AD, with the largest (area-weighted) contribution from the Antarctic Peninsula (AP).” 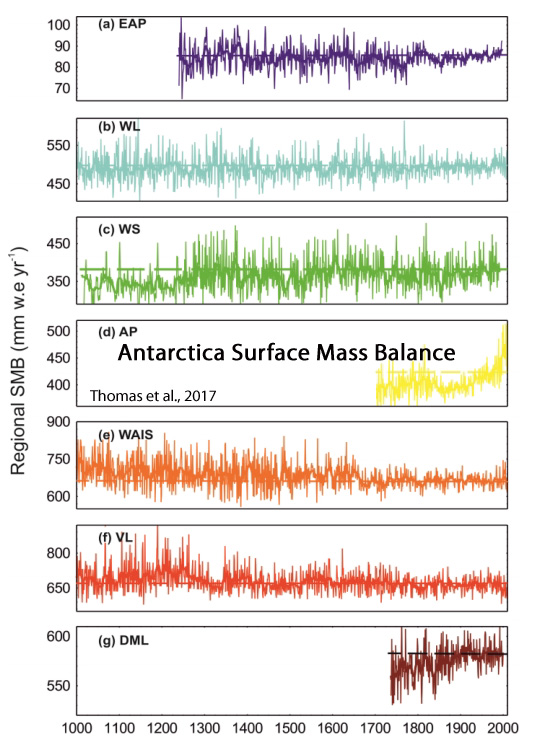