In late 2015, Soon, Connolly, and Connolly (hereafter SCC15) published a  comprehensive (101 pages) analysis of how the modern anthropogenic global warming (AGW) paradigm has been constructed.  The paper, published in  Earth Science Reviews, is entitled Re-evaluating the role of solar variability on Northern Hemisphere temperature trends since the 19th century.

What follows is a very brief summary of some of the graphical highlights in SCC15 as well as the fully cited conclusion.  Succinctly, the paper can be divided into 2 parts.

2..  CO2-based climate models do not adequately correlate with Northern Hemisphere (NH) temperature trends of the last 130 years; solar activity changes do correlate well with NH trends — especially when urban bias has been removed from the temperature record. 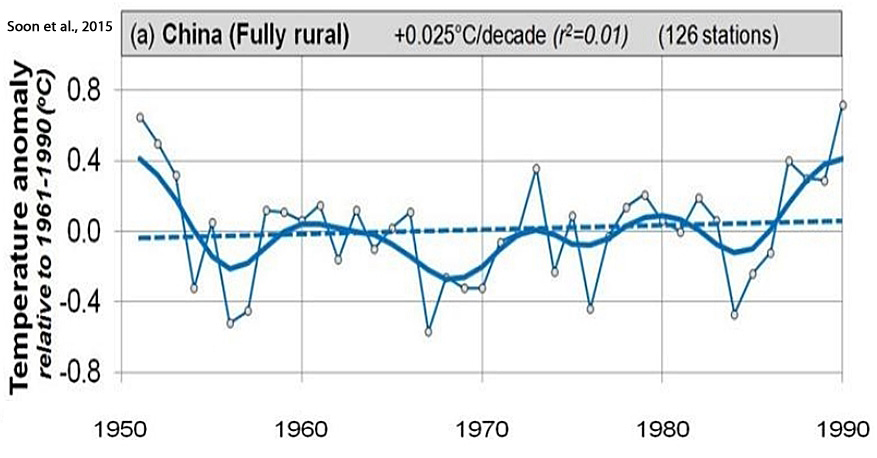 “[A]lthough there are 126 fully rural stations with data during the 1951-1990 period, there are only 13 and 17 fully rural stations during the 1907-1950 and 1991-2014 periods respectively, and none of the stations with records before 1907 are still fully rural. … For individual urban stations and areas in China, the temperature records can be very strongly affected by urbanization bias. For instance, Ren et al. (2007) found that between 65-80% of the apparent warming trend over the 1961-2000 period for the Beijing and Wuhan station records was probably due to increasing urban heat islands.  [T]he temperature trends increase from +0.025°C/decade (fully rural) to … +0.119°C/decade (fully urban). … If we assume that the fully rural stations are unaffected by urbanization bias, while the other subsets are, then we can estimate the extent of urbanization bias in the “all stations” trends by subtracting the fully rural trends. This gives us an estimate of +0.094°C/decade urbanization bias over the 1951-1990 period – similar to Wang & Ge (2012)’s +0.09°C/decade estimate.” 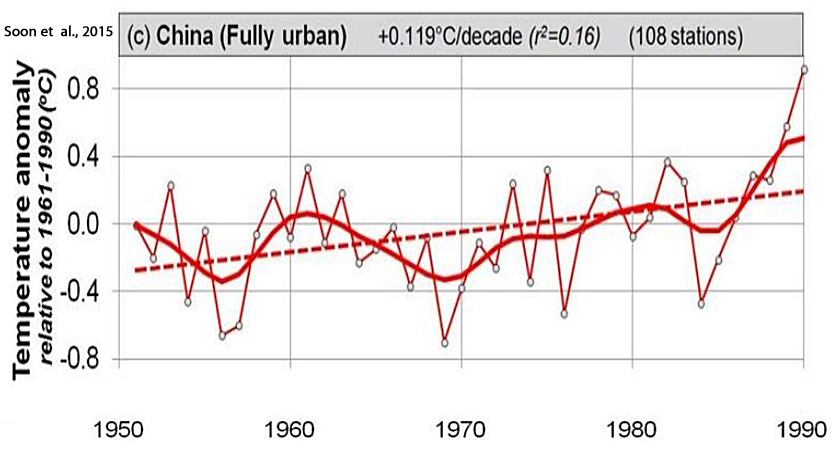 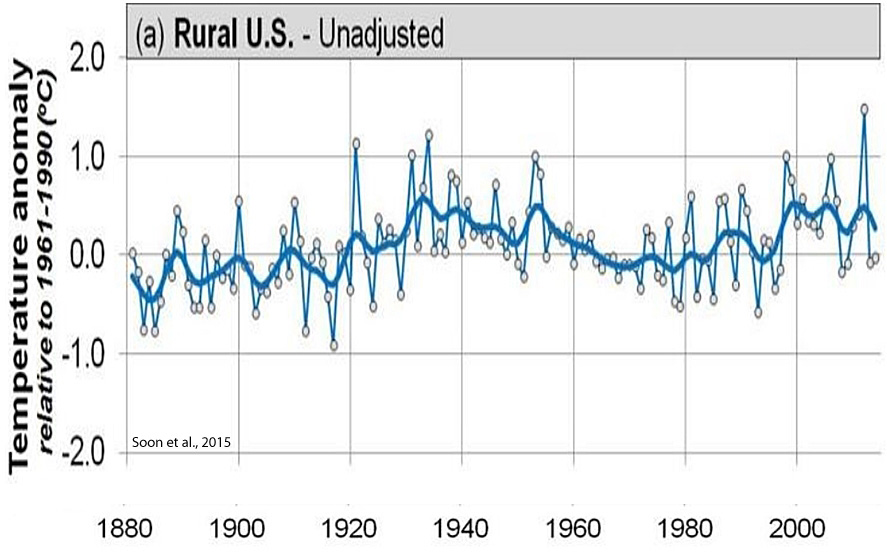 There are now fewer U.S. rural stations contributing to the Global Historical Climatology Network (GHCN) than there were in 1900. 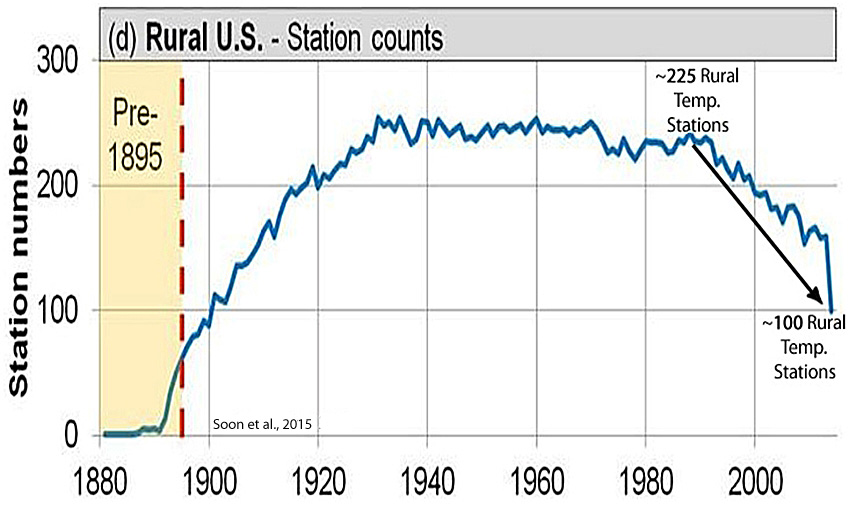 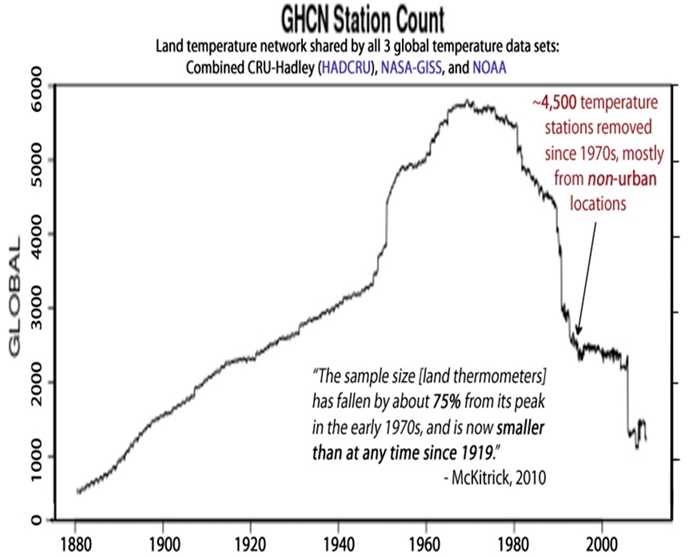 The Consequence Of Urban Bias: Artificial Land Warming Since 1980 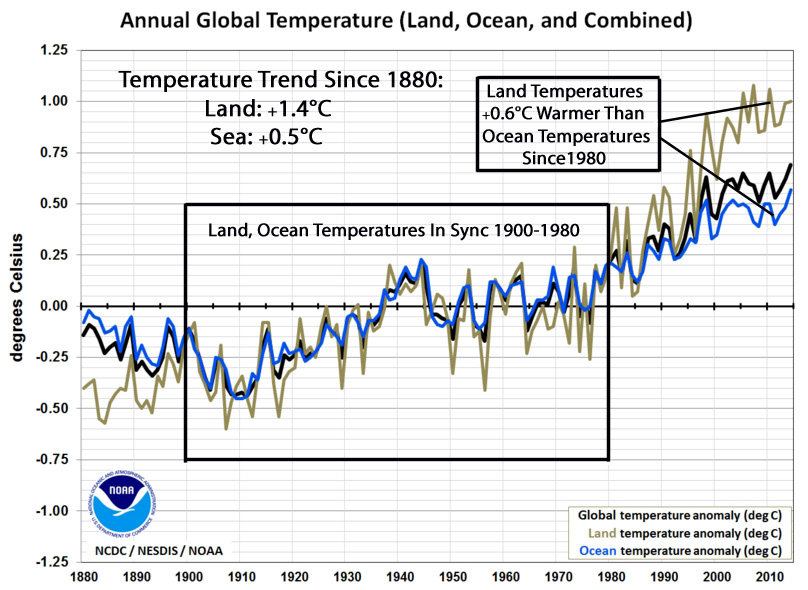 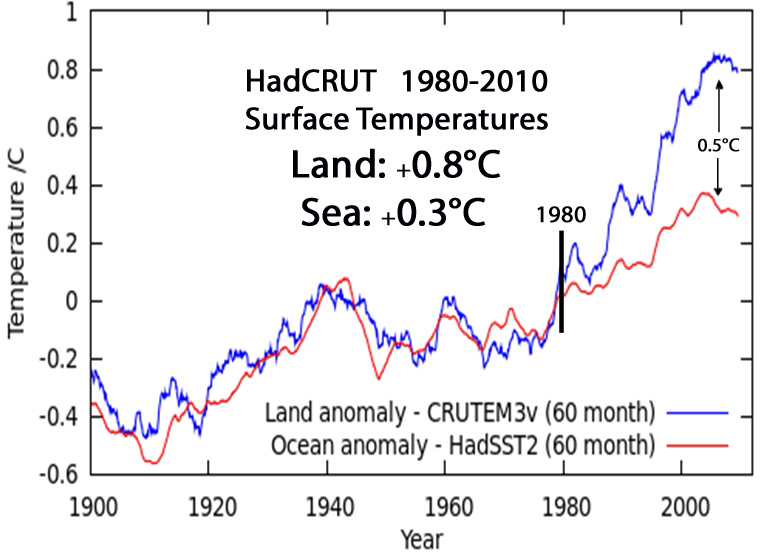 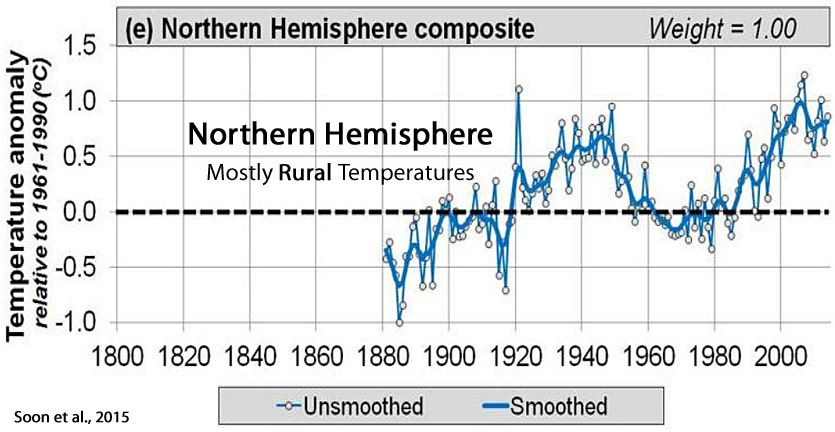 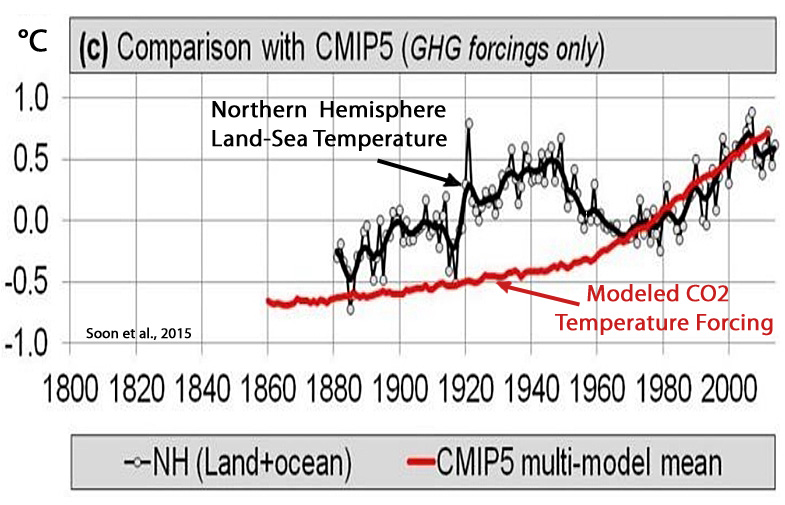 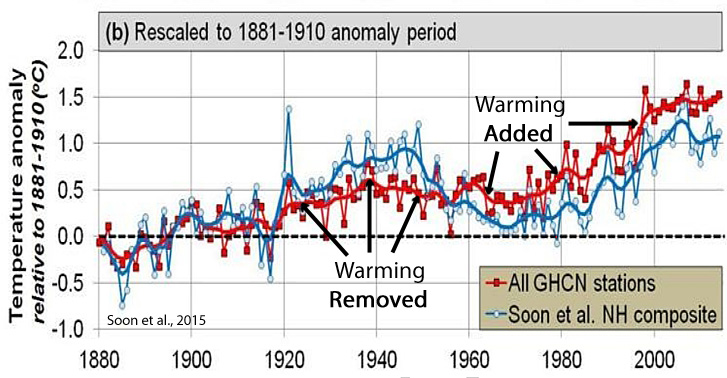 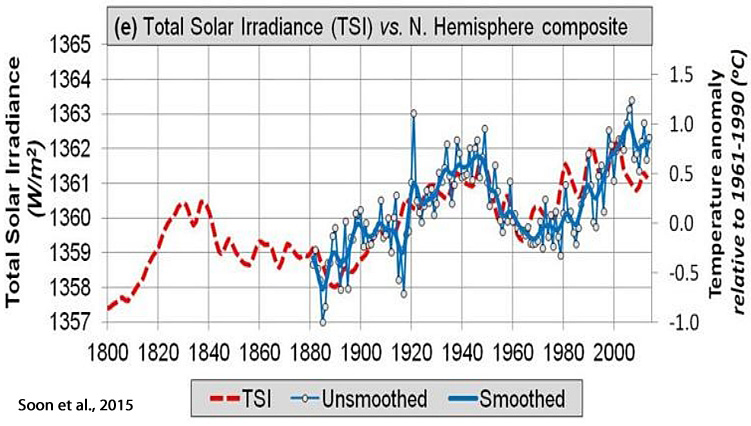 1.  “We have constructed a new estimate of Northern Hemisphere surface air temperature trends derived from mostly rural stations – thereby minimizing the problems introduced to previous estimates by urbanization bias. Similar to previous estimates, our composite implies warming trends during the periods 1880s-1940s and 1980s-2000s. However, this new estimate implies a more pronounced cooling trend during the 1950s-1970s. As a result, the relative warmth of the mid-20th century warm period is comparable to the recent warm period – a different conclusion to previous estimates. Although our new composite implies different trends from previous estimates, we note that it is compatible with Northern Hemisphere temperature trends derived from (a) sea surface temperatures; (b) glacier length records; (c) tree ring widths.”

2.   “However, the recent multi model means of the CMIP5 Global Climate Model hindcasts failed to adequately reproduce the temperature trends implied by our composite, even when they included both “anthropogenic and natural forcings”. One reason why the hindcasts might have failed to accurately reproduce the temperature trends is that the solar forcings they used all implied relatively little solar variability. However, in this paper, we carried out a detailed review of the debate over solar variability, and revealed that considerable uncertainty remains over exactly how the Total Solar Irradiance has varied since the 19th century. When we compared our new composite to one of the high solar variability reconstructions of Total Solar Irradiance which was not considered by the CMIP5 hindcasts (i.e., the Hoyt & Schatten reconstruction), we found a remarkably close fit. If the Hoyt & Schatten reconstruction and our new Northern Hemisphere temperature trend estimates are accurate, then it seems that most of the temperature trends since at least 1881 can be explained in terms of solar variability, with atmospheric greenhouse gas concentrations providing at most a minor contribution. This contradicts the claim by the latest Intergovernmental Panel on Climate Change (IPCC) reports that most of the temperature trends since the 1950s are due to changes in atmospheric greenhouse gas concentrations (Bindoff et al., 2013).”

47 responses to “Scientists Reveal How Man-Made Global Warming Is Created Via Data Manipulation, Dismissing The Sun”