What If Human Emissions

Aren’t All That Influential? 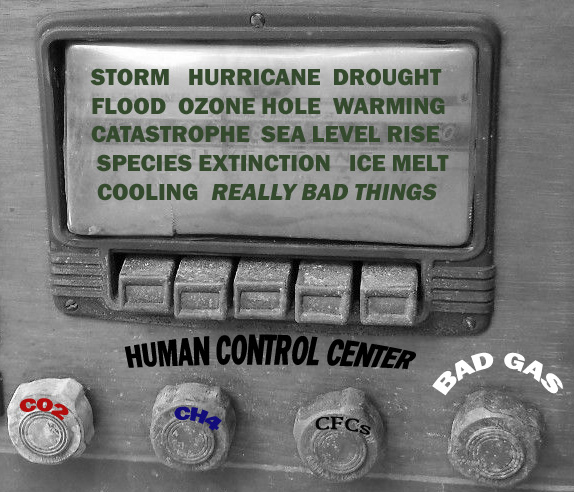 We have been led to believe that we can control the size of the ozone hole and both methane and CO2 concentrations with our emissions.

We have also been led to believe we control weather patterns (storminess, droughts, floods, hurricanes, tornadoes); we control tropospheric, atmospheric, surface, and deep ocean temperatures; we control glacier retreat and advance; we control relative sea level; we control whether or not over million species go extinct by 2050 . . . all by emitting more or less gaseous substances in our pursuit of energy and comfort.

What if we are overestimating our impact on the planet?  What if our gaseous emissions don’t really have anywhere near the impact we think they do?

What if we are too arrogant to even consider the possibility that the Earth cannot be “saved” by building more wind turbines and solar panels and recycling more plastic?

“We’re so self-important. Everybody’s going to save something now. ‘Save the trees, save the bees, save the whales, save those snails.’ And the greatest arrogance of all: save the planet. Save the planet – we don’t even know how to take care of ourselves yet.”

“The planet has been through a lot worse than us. Been through earthquakes, volcanoes, plate tectonics, continental drift, solar flares, sun spots, magnetic storms, the magnetic reversal of the poles … hundreds of thousands of years of bombardment by comets and asteroids and meteors, worldwide floods, tidal waves, worldwide fires, erosion, cosmic rays, recurring ice ages … And we think some plastic bags and some aluminum cans are going to make a difference? The planet isn’t going anywhere. WE are!”  — George Carlin

NASA Reveals New Results From Inside the Ozone Hole

“NASA scientists have revealed the inner workings of the ozone hole that forms annually over Antarctica and found that declining chlorine in the stratosphere [from reduced human emissions] has not yet caused a recovery of the ozone hole. …. [T]wo new studies show that signs of recovery are not yet present, and that temperature and winds are still driving any annual changes in ozone hole size. … The classic metrics create the impression that the ozone hole has improved as a result of the Montreal protocol. In reality, meteorology was responsible for the increased ozone and resulting smaller hole, as ozone-depleting substances that year were still elevated. The study has been submitted to the journal of Atmospheric Chemistry and Physics.

“‘Ozone holes with smaller areas and a larger total amount of ozone are not necessarily evidence of recovery attributable to the expected chlorine decline,’ said Susan Strahan of NASA’s Goddard Space Flight Center in Greenbelt, Md.”

Most Of The Measured Change In Ozone Is Natural, Not Anthropogenic

“[A] large portion of the measured change [in ozone] is not due to changes in [anthropogenic] emissions, but can be traced to changes in large-scale modes of ozone variability. This emphasizes the difficulty in the attribution of ozone changes, and the importance of natural variability in understanding the trends and variability of ozone.

Introduction: “Lin et al. (2014) attribute decadal changes in the interannual Mauna Loa ozone record to shifts in circulation patterns. However, at other locations, ozone exhibits considerable interannual variability on decadal timescales that has not been adequately explained (e.g., Koumoutsaris et al., 2008). In many cases, this ozone variability is not easily ascribed to changes in emissions. For example, changes in emissions do not explain the baseline ozone trends at Mace Head, Ireland (e.g., Hess and Zbinden, 2013; Fiore et al., 2009), measured as strongly positive during the most of the 1990s but since leveling off (Carslaw, 2005; Derwent et al., 2007, 2013; Simmonds et al., 2004). In an analysis of ozone trends over Europe, Wilson et al. (2012) conclude that the impact of European precursor emission reductions was masked by other sources of unknown ozone variability. Analyses by Logan et al. (2012) and Cui et al. (2011) show that the measured ozone increases at Alpine sites over Europe during the 1990s followed by decreases after 2000 are not easily explained by changes in emissions or changes in lower stratospheric ozone. Pozzoli et al. (2011) conclude that changes in meteorology and natural emissions account for 75 % of ozone variability from 1980 to 2005, largely masking changes in anthropogenic emissions. On decadal timescales, ozone trends can depend sensitively on the exact time period examined (Cui et al., 2011).”

Ozone Hole Grew To (2015) Record Size Due To Natural Forcing

“Recent research has demonstrated that the concentrations of anthropogenic halocarbons have decreased in response to the worldwide phaseout of ozone depleting substances. Yet, in 2015 the Antarctic ozone hole reached a historical record daily average size in October. Model simulations with specified dynamics and temperatures based on a reanalysis suggested that the record size was likely due to the eruption of Calbuco, but did not allow for fully-coupled dynamical or thermal feedbacks. We present simulations of the impact of the 2015 Calbuco eruption on the stratosphere using the Whole Atmosphere Community Climate Model with interactive dynamics and temperatures. Comparisons of the interactive and specified dynamics simulations indicate that chemical ozone depletion due to volcanic aerosols played a key role in establishing the record-sized ozone hole of October 2015. The analysis of an ensemble of interactive simulations with and without volcanic aerosols suggests that the forced response to the eruption of Calbuco was an increase in the size of the ozone hole by 4.5 million km2.”

Due To Measurement Uncertainties, ‘Methane Emissions Might Not Have Increased Dramatically…After All’

“We conclude that the current surface observing system does not allow unambiguous attribution of the decadal trends in methane without robust constraints on OH variability, which currently rely purely on methyl chloroform data and its uncertain emissions estimates.”

“The isotopic evidence presented here suggests that the methane rise [2007-2014] was dominated by significant increases in biogenic methane emissions, particularly in the tropics, for example, from expansion of tropical wetlands in years with strongly positive rainfall anomalies or emissions from increased agricultural sources such as ruminants and rice paddies. Changes in the removal rate of methane by the OH radical have not been seen in other tracers of atmospheric chemistry and do not appear to explain short-term variations in methane. Fossil fuel emissions may also have grown, but the sustained shift to more 13C-depleted values and its significant interannual variability, and the tropical and Southern Hemisphere loci of post-2007 growth, both indicate that fossil fuel emissions have not been the dominant factor driving the increase. A major cause of increased tropical wetland and tropical agricultural methane emissions, the likely major contributors to growth, may be their responses to meteorological change.”

“On the contemporary Earth, gas hydrate is dissociating in specific terrains in response to post-LGM [last glacial maximum] climate change and probably also due to warming since the onset of the Industrial Age. Nevertheless, there is no conclusive proof that the released methane is entering the atmosphere at a level that is detectable against the background of ~555 Tg yr−1 CH4 emissions. The IPCC estimates are not based on direct measurements of methane fluxes from dissociating gas hydrates, and many numerical models adopt simplifications that do not fully account for sinks, the actual distribution of gas hydrates, or other factors, resulting in probable overestimation of emissions to the ocean-atmosphere system.”

The Domination Of Natural CO2 Emissions

“While scientists and policy experts debate the impacts of global warming, Earth’s soil is releasing roughly nine times more carbon dioxide to the atmosphere than all human activities combined.”

“Plant respiration results in an annual flux of carbon dioxide (CO2) to the atmosphere that is six times as large as that due to the emissions from fossil fuel burning, so changes in either will impact future climate.”

“The estimated gross amount of CO2 produced [by termites] is more than twice the net global input from fossil fuel combustion.  As we noted above, termites process the  equivalent of about 28 percent of the earth’s NPP [net primary productivity, or plant energy].”

“The anthropogenic contribution to the actual CO2 concentration is found to be 4.3%, [and] its fraction to the CO2 increase over the Industrial Era is 15%“

“[R]esults do not indicate a measurable year to year effect of annual anthropogenic emissions on the annual rate of CO2 accumulation in the atmosphere.”
Share this...