Browse: Home / 2017 / July / 01 / How A Wind Gust In Hamburg Morphed Into Major “Tornado” In The Media…Made International Headlines

If you happened to read or hear the German and international headlines from just over a week ago, you’d think the million-population port city of Hamburg, Germany, had been hit by a devastating tornado on June 22, leaving a path of destruction in its wake.

What follows is a great example of how the media will run with anything, without checking, as long as it fits their climate and extreme weather narrative. The German media over the years have been tending to hype up every weather anomaly — to get the message into people’s heads that climate change is real and is happening.

The following story is almost unbelievable. A local gust of wind toppling over a few trees somehow managed to morph within the media into a headline-making super-tornado that supposedly ripped through a large city. Fake news at its best.

On June 22 a cold front swept across Hamburg, Germany, accompanied by severe weather, so “severe” that hundreds of media outlets, domestic and foreign, reported it has headline news.

Skeptical, Spiegel science journalist Axel Bojanowski decided to investigate to see what really happened, and subsequently reported here the result. It turns out it was 99% fake news. Bojanowski wrote:

Residents spoke of heavy damage, the media reported. However the body of evidence is thin. […] the search for evidence has proven to be difficult.”

It turns out that the “tornado” that supposedly hit Hamburg in broad daylight, a city of some 1 million residents, so far has found only one single (dubious) witness. Yet, it was all the media needed to unleash sensational headlines globally: “A tornado rips through the city of Hamburg“.

According to Bojanowski “the storm of confusion” over the “tornado” was started around lunch time by the German DWD national weather service, which tweeted: “Tornado over Hamburg! About 10 km SSW from the city center. Lasted about 5 min.”

This in turn was followed by the German DPA press agency (Germany’s version of the AP) releasing at 2:34 pm: “Tornado leaves devastation in its wake south of Hamburg.” Here the German DPA relied on a sole eyewitness report from firefighter Stefanie Engelke, who reported witnessing up close a powerful gust of wind uprooting some trees that toppled onto a building, causing damage to its roof.

Shortly thereafter, however, the Hamburg Fire Department disputed that a “tornado” had ever occurred, tweeting later it had “no knowledge over any tornado“. Yet the DPA stuck to its story, Bojanowski writes. And the DWD weather service also reiterated having witnessed a tornado.

But it was already too late. By then that powerful wind gust, which had uprooted some trees, quickly managed to morph into a full fledge super tornado in the media, and got reported internationally. The World News Media here tweeted:

By Thursday evening, the DWD backed off its original “5-minute tornado” account, tweeting that it had witnessed the “tornado” near the middle of the city instead. Later at Facebook the DWD even released a photo of the “tornado” it had “seen”: 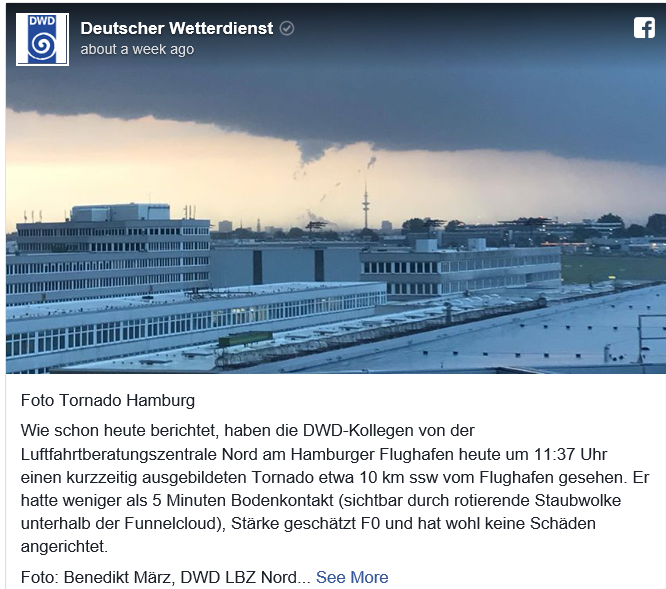 As reported earlier today, the DWD colleagues of the Aviation Advisory Center North at the Hamburg airport saw a very short-lived tornado about 10 km ssw of the airport at 11:37 a.m. It had ground contact less than 5 minutes  (visible by the rotating dust cloud beneath the funnel cloud). Magnitude estimated at F0, and indeed did not cause any damage.”

That hardly looks like a tornado in the photo. And so not surprisingly even that DWD account got disputed later by a witness. At Twitter Hamburg resident Kerrag posted a 1:55 minute video showing no ground contact at all!

That’s the story of how the Hamburg “tornado”, which was merely a gust of wind, wound up making international headlines as a “devastating” tornado that had flattened part of a major European city.