Yesterday we learned that a giant iceberg just split off from the Antarctic Peninsula.

Most media outlets were uncharacteristically mild with their declarations of concern.  Even The Guardian pointed out that the breakup of the ice is naturally occurring, glaciologists are “not unduly concerned about it“, and while the event “might look dramatic, experts say it will not itself result in sea level rises.”

Rolling Stone‘s Jeff Goodell, on the other hand, was not quite so apt to dismiss the importance of the Antarctic ice “crack-up“.  He insisted that there is a certain big-deal connection between the calving of the Larsen C ice shelf and both catastrophic sea level rise…

“Given that Antarctica contains enough ice to raise sea levels about 220 feet … the break-up for Larsen C is certainly a big deal.”

…and human-caused “cooking the planet”.

“It is also well-timed politically. Larsen C has broken off just a month or so after President Trump withdrew the U.S. from the Paris climate agreement, when people around the world are wondering just how much time we have left before the climate spins out of control – and what to do about it. A story in New York magazine about how climate change is cooking the planet kicked up a lot of debate about the usefulness of fear in inspiring political change. Meanwhile, the responsibility for the Larsen C crack-up is already being doled out: Climate activists have launched a campaign to rename the now-liberated Larsen C ice shelf as the Exxon Knew 1 iceberg.”

Scientists: The Antarctic Peninsula Has Been Rapidly Cooling Since 1999

Apparently Jeff Goodell hasn’t been keeping up with the latest cryosphere science.

Glacier retreat in the region has begun to slow down or shift to surface mass gains.

And the ocean surrounding Antarctica as a whole (the Southern Ocean) has also been cooling since 1979, consistent with the overall trend of sea ice growth during this time period.

“However, a recent analysis (Turner et al., 2016) has shown that the regionally stacked temperature record for the last three decades has shifted from a warming trend of 0.32 °C/decade during 1979–1997 to a cooling trend of −0.47 °C/decade during 1999–2014. … This recent cooling has already impacted the cryosphere in the northern AP [Antarctic Peninsula], including slow-down of glacier recession, a shift to surface mass gains of the peripheral glacier and a thinning of the active layer of permafrost in northern AP islands.”

“The Antarctic sea ice extent has been slowly increasing contrary to expected trends due to global warming and results from coupled climate models. After a record high extent in 2012 the extent was even higher in 2014 when the magnitude exceeded 20 × 106 km2 for the first time during the satellite era. … [T]he trend in sea ice cover is strongly influenced by the trend in surface temperature [cooling].”

A new scientific paper reveals that modern rates of glacier recession – including the recent fate of the Larsen C ice shelf – are well within the range of natural variability.

Van der Bilt et al. (2017) have produced a glacier reconstruction for Southern Ocean islands near Antarctica (South Georgia) indicating glacier recession was more pronounced than today during the late 18th century, and that the second highest glacier advance of the last 1,000 years occurred in the 1960s and 1970s.  Only the peak glacier advances of the late 1600s were more extensive than the advances of ~50 years ago.

Similar to the recent Antarctic Peninsula and Southern Ocean cooling and nearly 4 decades of sea ice growth described above, this millennial-scale record of glacier retreat and advance supports the position that humans and variations in carbon dioxide concentrations do not play an influential role in determining the fate of polar ice. 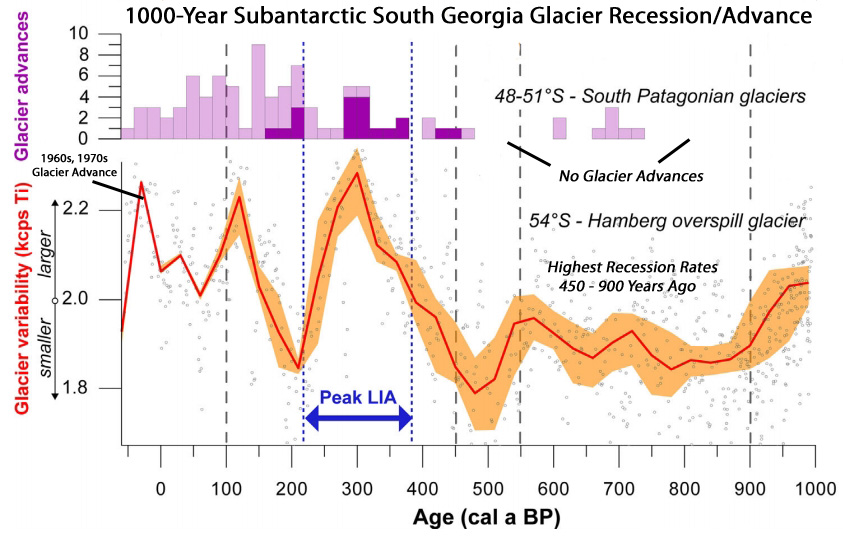 To further put yesterday’s ice “crack-up” news into a long-term context, scientists have found there was a widespread (∼280,000 km2 ) collapse of the “world’s largest” ice shelf that occurred between 4,000 and 1,500 years ago.   Retreat rates averaged about 10 kilometers per century during this period.

Of course, this ice sheet collapse occurred while CO2 concentrations hovered near a stable 275 parts per million (ppm), which is about 130 ppm lower than today’s CO2 levels.

Succinctly, the Larsen C ice shelf calving event is not unusual, unprecedented, or even remarkable in the context of Antarctica’s long-term natural variability.

Widespread collapse of the Ross Ice Shelf during the late Holocene

“The Ross Sea is a major drainage basin for the Antarctic Ice Sheet and contains the world’s largest ice shelf. Newly acquired swath bathymetry data and sediment cores provide evidence for two episodes of ice-shelf collapse. Two novel geochemical proxies, compound specific radiocarbon dating and radiogenic beryllium (10Be), constrain the timing of the most recent and widespread (∼280,000 km2) breakup as having occurred in the late Holocene. … Breakup initiated around 5 ka, with the ice shelf reaching its current configuration ∼1.5 ka. In the eastern Ross Sea, the ice shelf retreated up to 100 km in about a thousand years. Three-dimensional thermodynamic ice-shelf/ocean modeling results and comparison with ice-core records indicate that ice-shelf breakup resulted from combined atmospheric warming and warm ocean currents impinging onto the continental shelf.”