‘Overrides Any Effect By CO2’ 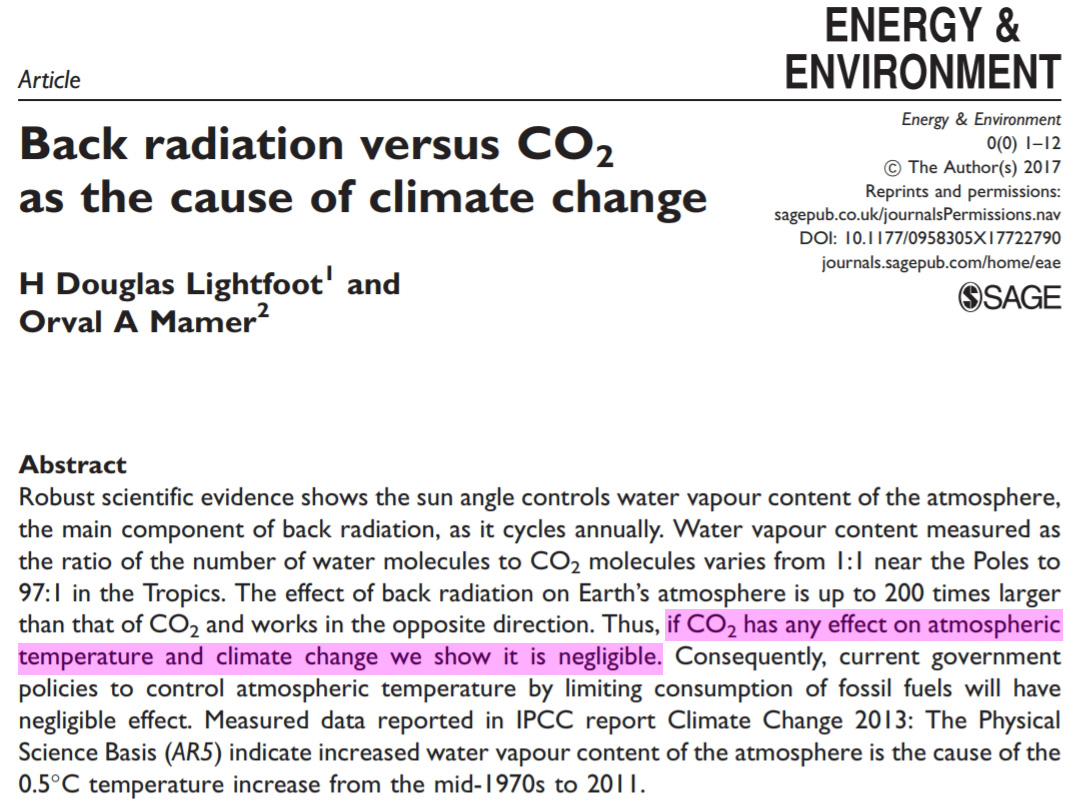 (1) Robust scientific evidence shows the sun angle controls water vapour content of the atmosphere, the main component of back radiation, as it cycles annually.

“The purpose of this study is to present robust evidence that the sun is working with water vapour to control the Earth’s climate and to show that the influence of CO2 on atmospheric temperature is so small as to be negligible.”

(2) Water vapour content measured as the ratio of the number of water molecules to CO2 molecules varies from 1:1 near the Poles to 97:1 in the Tropics. 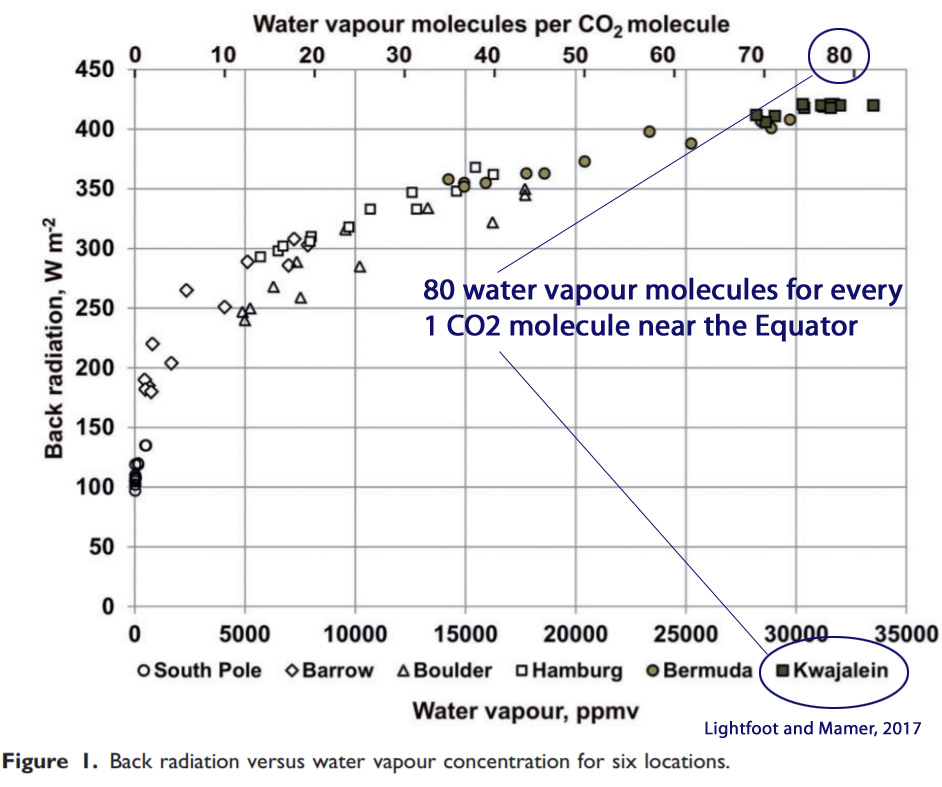 The sun angle determines the H2O/CO2 ratio … There is little sunlight in winter above the Arctic Circle, such as at Inuvik, Canada, and the average H2O/CO2 ratio is as low as 1:1. In summer it rises to an average maximum of 29:1.  … The highest sun angle corresponds to the highest H2O/CO2 ratio of 29:1 and the lowest angle to the lowest of 1:1. The H2O/CO2 values for Singapore and Nairobi also show the highest ratios occur at the highest sun angles.  The difference in H2O/CO2 ratios between summer and winter is larger towards the Poles and smaller towards the equator. The levels of both the summer and winter ratios depend on whether or not there is a relatively warm ocean nearby to provide the water vapour.

(3) The effect of back radiation [water vapour] on Earth’s atmosphere is up to 200 times larger than that of CO2 and works in the opposite direction.

The actual CO2 concentration experienced at any specific location is determined by the physical gas laws discovered by Boyle and Charles. For example, the elevation of Boulder, Colorado, is 1655 m, the average July high temperature is 33°C and the average low in January is 2°C. The calculated CO2 concentrations based on 407.9 ppmv in dry air are 298.0 and 336.4 ppmv, respectively. The RF [radiative forcing] of CO2 in July at 298.0 ppmv is 5.22ln(336.4/298.0) ¼ 0.63W m2 lower than in January at 336.4 ppmv. While the RF of CO2 was falling by 0.63W m2 from January to July, the back radiation was increasing by 110 W m2 from 240 to 350 W m2. From July to January the situation reverses. This shows back radiation [water vapour] acts in opposition to the warming effect of the CO2, is larger by (110/0.63) = 174 times at the peak and overrides any effect by CO2 on atmospheric temperature.

If there is a warming effect by CO2 on the atmosphere, it is too small to measure and can be considered as being negligible. In fact, it is fair to say there is virtually a complete disconnect between the concentration of CO2 in the atmosphere and atmospheric temperature. 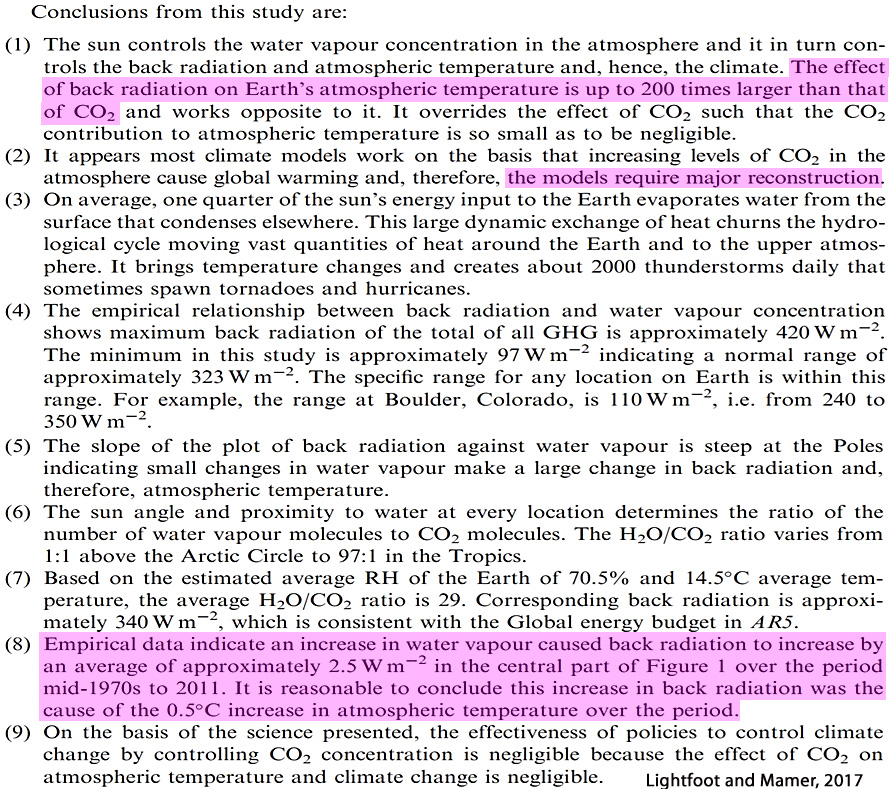 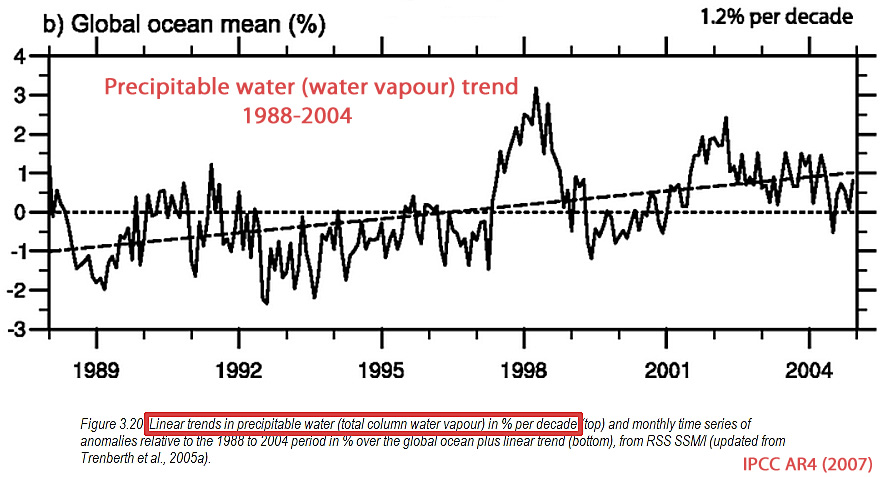 A Selection of Supporting Scientific Papers

We show that a comprehensive analysis results in relegating [CO2] to insignificance as a determinant of climate change, and that atmospheric water vapour arising almost exclusively from nonhuman sources is by far the largest source of radiative forcing and temperature change.  … The failure of the regression to reveal any contribution of changes in [GHG] to changes in Gistemp’s GMT anomalies is obvious both from Figure 1 and from Table 2, which shows total statistical insignificance because with t < 2.0, and 𝑃>0.05, the critical values are not attained. These results validate the null hypothesis from Hegerl et al. that there is no discernible and statistically significant causation of global temperature change attributable to the radiative forcing from anthropogenic changes in noncondensing GHGs. … [O]nly the [H2O] variable is statistically significant, accounting for more than 90 per cent of the changes in mean maximum temperature over the period 1960–2006. …  [H2O] accounts for more than 90 per cent of temperature change near where C. D. Keeling began his measurements of the atmospheric concentration of CO2 back in 1958.

[W]ater vapor is the most potent greenhouse gas because it absorbs strongly in the infra-red region of the light spectrum, first demonstrated by Tyndall (1861), despite the conventional view that because the water vapor content of the atmosphere will increase in response to warmer temperatures, water vapor is only a feedback that merely amplifies the climate warming effect due to increased carbon dioxide alone. In reality, the [H2O] variable in the NOAA’s database proves to be a remarkably powerful determinant of climate variability over the period from 1960 to 2006 not only at Barrow but across all USA, as it is always highly statistically significant at better than the 95% level of confidence for both annual mean minimum and maximum annual temperatures. This is hardly surprising, if only because in reality, as Tans has noted, “global annual evaporation equals ~500,000 billion metric tons. Compare that to fossil CO2 emissions of ~8.5 billion ton C/year,” and even the total level of [CO2] is only 827 billion tonnes of carbon equivalent. It would seem to be a case of the tail wagging the dog if the additions to [CO2] from human burning of hydrocarbon fuels have raised global temperatures enough (just 0.0125°C p.a. [per year] since 1950) to generate annual evaporation of 500,000 billion tonnes of [H2O].

Estimates of the atmospheric temperature changes due to a doubling of CO2 concentration have be with a standard radiative flux model.  They yield temperature changes of >0.25 K.  It appears that the much larger changes predicted by other models arise from additional water vapor evaporated into the atmosphere and not from the CO2 itself. … It is important to stress…that CO2 is not the main constituent involved in infrared transfer.  Water vapor plays the major role and ozone is also of importance.  … Twenty of the spectral intervals are dominated by water vapor and the other two contain CO2 (~15 µm) and O3 (~9.6 µm), although overlap with water vapor is also included. Calculations were performed for CO2 concentrations of 330 and 600 ppmv, taking care to include the changed CO2 concentrations also in the near-infrared solar absorption (cf. Newell et al., 1972). Both sets of computations were also repeated with cloud absent.   The infrared flux dominated by CO2, as is well known, is only about 10% of that controlled by water vapor.

Scientists are still debating the reasons for “global warming”. The author questions the validity of the calculations for the models published by the Intergovernmental Panel on Climate Change (IPCC) and especially the future scenarios. Through spectral calculations, the author finds that water vapour accounts for approximately 87% of the greenhouse (GH) effect and only 10% of CO2.  A doubling of the present level of CO2 would increase the global temperature by only 0.51 °C without water feedback.

The distribution of the radiating gases is largely responsible for the layering of the Earth’s atmosphere.  The troposphere extends from sea level up to approximately 12 km at which point the temperature has dropped to approximately -60°C.  Water vapor is about 10 times more important than carbon dioxide, both for radiative heating by absorbing solar radiation and for radiative cooling.  In the stratosphere, however, radiative heating by the absorption of solar radiation by ozone is dominant.

The explanation for climate change is still searching for an experimental proof and the most important question is whether climate change is anthropogenic. According to the Intergovernmental Panel on Climate Change IPCC global warming is mostly man made due to the increasing CO2 concentration. In this work we study the contributions of humidity and clouds to the surface temperature. We will show that changes of relative humidity or low cloud cover explain the major changes in the global mean temperature. We will present the evidence of this argument using the observed relative humidity between years 1970 and 2011 and the observed low cloud cover between years 1983 and 2008. One percent increase in relative humidity or in low cloud cover decreases the temperature by 0.15 °C and 0.11 °C, respectively. In the time periods mentioned before the contribution of the CO2 increase was less than 10% to the total temperature change.

As it is known, CO2 has intensive absorption bands in the infrared region of spectra, but only one of them (about 15 µm) is of considerable importance in transferring heat radiation. … When water vapour is present in large quantity (w > 2 cm), absorption of radiaton is almost quite independent from CO2 content.