AGW scandal by four scientists and the IPCC

The anthropogenic global warming (AGW) theory of the IPCC is a fake science developed by the following scientists for fame & fund, causing huge economic losses to the world. President Trump made a scientifically right decision to withdraw the U.S. from the Paris Agreement and will liberate mankind from the AGW scam.

In the farewell lecture held on October 26, 2001 in Tokyo, Manabe talked as follows:

Research funds have been $3 million per year and $120 million for the past 40 years. It is not clever to pursue the scientific truth. A better way is choosing the relevant topics to society for the funds covering the staff and computer cost of the project.”

The uniform warming comes from Manabe’s careless idea on the perturbed atmosphere with 2xCO2 to use the fixed lapse rate (temperature decrease with height) of 6.5°C/km for 1xCO2 and 2xCO2 in his pioneer work of Manabe (1967) on the RCM as follows:

The observed tropospheric lapse rate of temperature is approximately 6.5°C/km. The explanation for this fact is rather complicated. It is essentially the result of a balance between (a) the stabilizing effect of upward heat transport in moist and dry convection on both small and large scales and (b), the destabilizing effect of radiative transfer. Instead of exploring the problem of the tropospheric lapse rate in detail, we here accept this as an observed fact and regard it as a critical lapse rate for convection.” 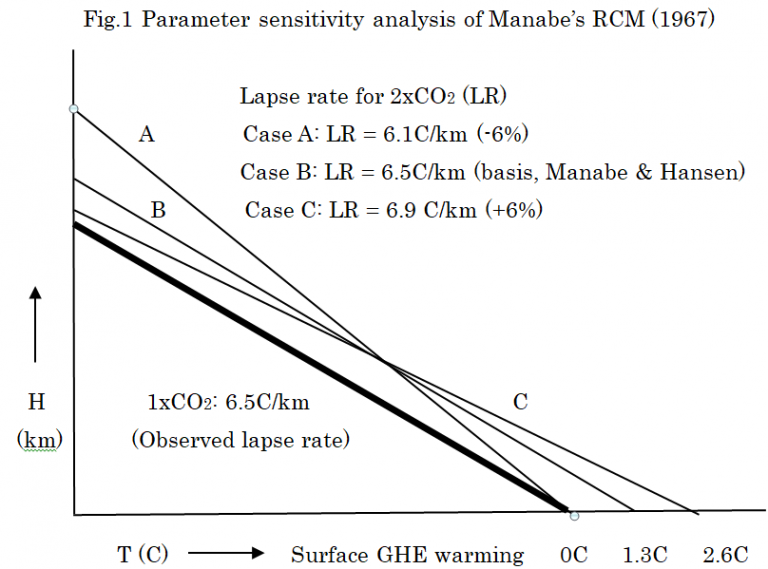 The lapse rate of 6.5C/km is defined for 1xCO2 in the U.S. Standard Atmosphere (1962). There is no theoretical guarantee, however, that the same lapse rate will be maintained in the perturbed atmosphere with 2xCO2 because it depends on radiation, convection, large scale dynamics and moisture etc. Therefore, the lapse rate for 2xCO2 (LR) is a parameter requiring a sensitivity analysis as shown above.

Another basis of the AGW theory is the calculations by Cess (1976) & Schlesinger (1986) furnishing the surface GHE warming of 1.2°C based on equation (1):

Eeff: the emissivity of the earth-atmosphere system.

The calculations, however, are erroneous since Eeff is regarded as a constant in their differentiation of equation (1) with Ts though it is a variable as well as Ts as follows:

Further, equation (1) is not in line with the energy budget of the earth (see Fig.2):

(a) At the surface, there are evaporation Fe and conduction Ft, being missed in (1).

(b) Equation (3) shows the GHE increase for 2xCO2 raises the upper troposphere temperature Tu instead of Ts because the OLR is governed by the Fu.

What follows is the energy budget of the earth: 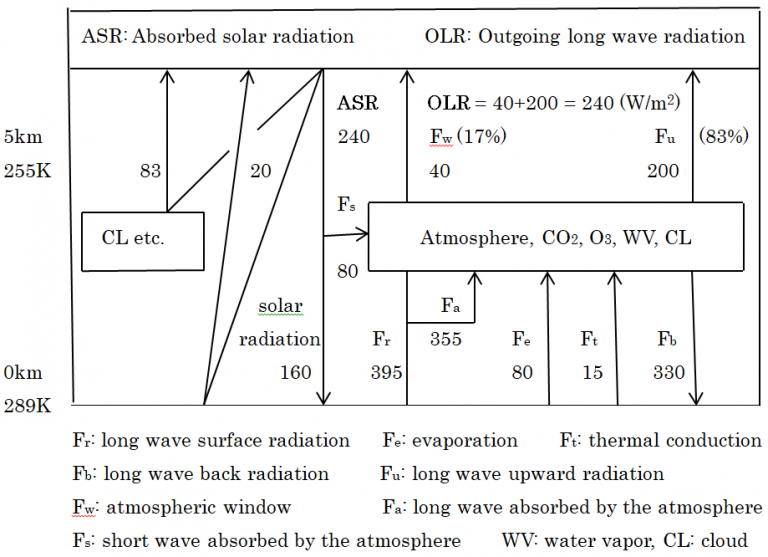 The IPCC 4th Assessment Report (2007) claims the surface warming for 2xCO2 (climate sensitivity) is 3°C from the 14 GCMs studies as follows:

The surface GHE warming of 1.2°C, however, has no theoretical basis as shown above. Actually the 102 GCMs studies showed much larger troposphere temperature increase than observations with balloon and satellite in the model comparison project (CMIP-5) for the IPCC 5th Assessment Report (2013) as shown below. 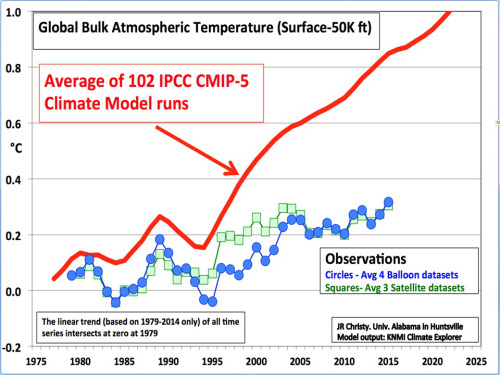 In reality, the surface GHE warming is negligibly small from the masking effect of water vapor (0.4 vol. %) on the GHE increase for 2xCO2 with the Stefan-Boltzmann law. In contrast the GHE warming is around 1°C at the upper troposphere above 5km with the radiative forcing (RF) of ~4W/m2 for 2xCO2 due to scarce water vapor as follows:

Meanwhile, he admitted that the RCM was fudged because its results strongly depended on the lapse rate used in an interview with Spencer Weart held on October 23, 2000 at NASA. An excerpt from the interview follows:

Again, are you using somebody else’s…

Hansen: Yes. So it’s a fudge. That’s why you have a 3D model to do it properly. In the 1D model, it’s just a fudge, and you can choose different lapse rates and you get somewhat different answers. So you try to pick something that has some physical justification. But the best justification is probably trying to put in the fundamental equations into a 3D model.

On June 11, 1986, Hansen made the following erroneous prediction based on NASA’s climate model for fame & fund while he knew the model was fudged as shown above:

By the 2020s, according to NASA’s calculations, the average annual temperature across much of the United States will have risen by 9 degrees Fahrenheit or more.

Source: 1986 – The Year When Climate Fraud Reached A Tipping Point

Hansen (2016) scared society with superstorms and rapid sea level rise to warn COP21 of the necessity of harder CO2 regulations for the Paris Agreement. From the U.S. National Hurricane Center, however, the order of central pressure of hurricane at landfall of the U.S. is as follows:

The strongest hurricane Labor Day hit in 1935 when the U.S. annual heat wave index stands out in the EPA graph for 1895-2015 as shown by the following article. Source: One Of The Most Fraudulent NOAA/EPA Graphs

Thus, CO2 increase had no relation to the hurricane strength governed by increasing solar activity and positive Pacific Decadal Oscillation index during 1930-1940. Further, the following article shows the sea level rise of 2-3 mm/year at Boston and Florida. The graph shows no acceleration claimed by the AGW scientists frequently. Source: Extreme Climate Fraud, And The Stakes For America, https://realclimatescience.com