In the wake of a fall storm ‘Xavier’ that struck Germany and claimed 7 lives, one of Germany’s most popular TV Talkshows, Maischberger 1 on ARD German public television, recently featured climate change in discussion round bearing the title: “Xavier and the weather extremes: has our climate reached the tipping point?” 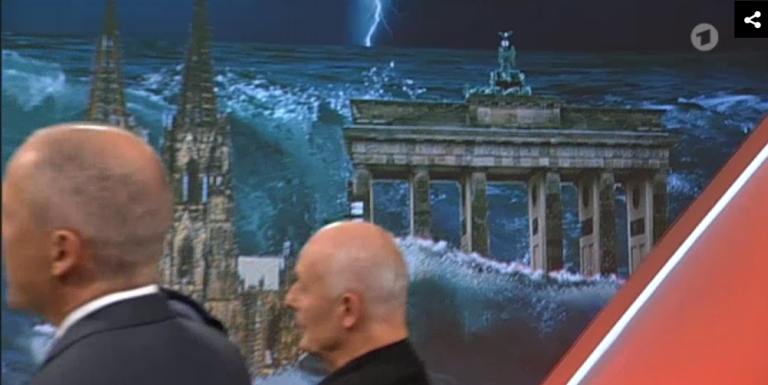 Cologne and Berlin under water! Backdrop on set for ARD German television discussion round on climate change. Image cropped from Maischberger 1 here.

The discussion round included, among others, Prof Hans-Joachim Schellnhuber, high profile Swiss meteorologist Jörg Kachelmann, who by the way is a warmist, and Swiss science journalist Alex Reichmuth.

Not surprisingly, talk show moderator Sandra Maischberger introduced the show with dramatic scenes of a climate in collapse, and then asked the round if this if the recent storms Xavier and now Orphelia are unprecedented. So dramatic in fact were the images of Maischberger’s intro that even German daily Die Welt here commented that “ARD had allowed itself to be inspired a bit by Hollywood“.

When asked by Maischberger about the recent storms, Kachelmann immediately dumped cold water on the notion that they were unusual, noting that storm Xavier seemed worse because it hit in October when trees are still fraught with foliage and thus cause far more wind resistance and cause tress to fall more often. Overall, Xavier was just a normal fall storm, Kachelmann told the audience.

“Storms don’t come with a label”

When asked if this year’s heavy rains were due to global warming, Kachelmann responded:

“We don’t know case by case because all the thunderstorms and storms don’t come with a label stating: ‘I’m here only because of you, or your actions, to say it correctly’. The problem is that we don’t know.”

No detectable increase in storm frequency

Kachelmann went on to explain that experts evaluated the data from the German Weather Service and concluded there has been “no increase in frequency in these events“. He added:

Also with tropical storms, looking at it globally, from the data of the American weather agencies, up to now we see no increase in frequency.”

A few seconds later he responded to Maischberger’s inquiry about the “monster hurricanes” hitting the Caribbean and USA:

Yes, this is an active season. But it is not a record season. It is not anything that has not happened before. When we look back at the last 50 or 60 years, we see no trend.”

During the course of the Talkshow, moderator Maischberger globetrotted across the entire planet, it seemed, going from one weather disaster to the next. She pressed Kachelmann about the fires in northern California. Here too the Swiss veteran meteorologist dismissed the notion that it’s unusual, reminding the audience that California is a dry state and these things have always happened before:

When you look at the archives, we see no increase in frequency.”

Kachelmann also reminded that anyone can make a list of 100 disasters in any year.

At about the 16-minute mark, Maischberger turned to Swiss journalist Alex Reichmuth, who like Schellnhuber studied physics and mathematics. Journalist Reichmuth, however, is far more critical of climate change,and told the audience that climate science is more a religion than science and that it all reminded him of the Jehovah Witness sect.

This is about a religious conversion – ride your bicycle more and we’ll be redeemed.”

Reichmuth reminded the audience that even the IPCC stated that there is no clear trend regarding weather extremes.

Reichmuth then slammed Schellnhuber for his outlandish predictions of the future, telling the “renowned” Potsdam professor that he “has clearly deviated from the scientific approach“. Just a minute earlier Schellnhuber had seemed to claim that 99% of the scientists agree with him.

Surprisingly guest Dorothee Bär of the conservative CSU party said she doubted that man was all responsible for the 1°C warming of the past century and that economy and well-being of the citizen had to be placed at the forefront of any energy policy. But later in the show the CSU politician hopped on the politically correct “we have to do something” facade – as did Kachelmann.

At the 34-minute mark, the talk switched to Trump’s backing out of the Paris Accord and whether the fight against the climate would hurt the economy. Most of the discussion was filled Marxist-brand utopian platitudes with few in the round grasping the technical implications of green energies. For example, suddenly Schellnhuber poased as an expert and leading authority on transportation technology, agriculture and economics, and gave the impression storage systems are all ready to go!