Do Supernova Events Cause 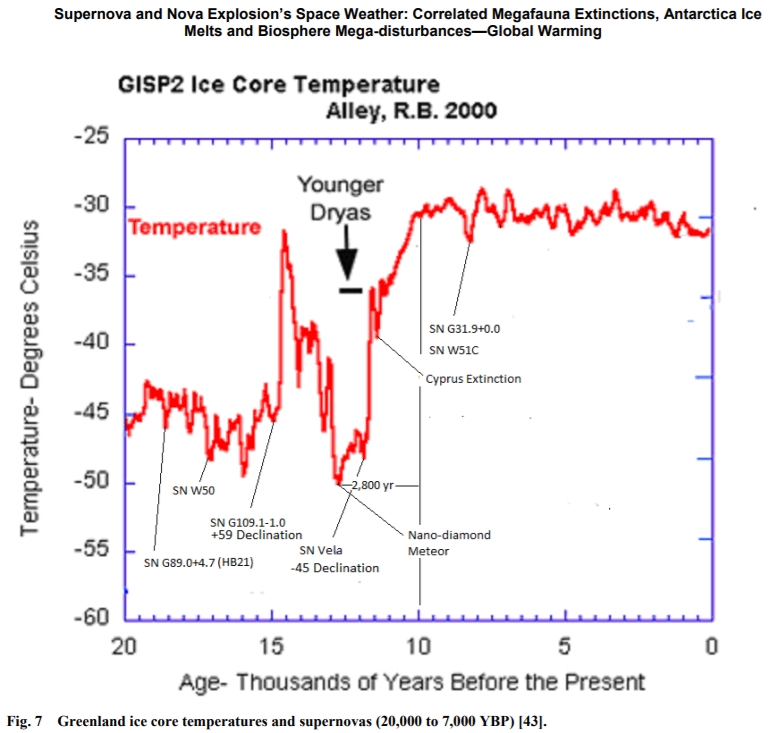 In recent years, mass die-offs of large animals – like the sudden deaths of 211,000 endangered antelopes within a matter of weeks – have been described as “mysterious” and remain largely unexplained.

Determining the cause of the retreat to ice ages and the abrupt warmings that spawned the interglacial periods has remained controversial for many decades.

William Sokeland, a heat transfer expert and thermal engineer from the University of Florida, has published a paper in the Journal of Earth Science and Engineering that proposes rapid ice melt events and ice age terminations, extreme weather events leading to mass die-offs, and even modern global warming can be traced to (or at least correlate well with) supernova impact events.

The perspectives and conclusions of researchers who claim to have found strong correlations that could explain such wide-ranging geological phenomena as the causes of glacials/interglacials, modern temperatures, and mysterious large animal die-offs should at least be considered…while maintaining a healthy level of skepticism, of course.

Discovery – if that is potentially what is occurring here – is worth a look.

Scientists generally state that debris from supernova does not impact our planet.  They have no concept that incoming particles from exploding stars are focused by our sun’s gravity and the magnetic fields of the sun and earth.

[M]any harmful effects are possible in the Supernova and Nova Impact Theory, SNIT, including extreme changes of the climate. 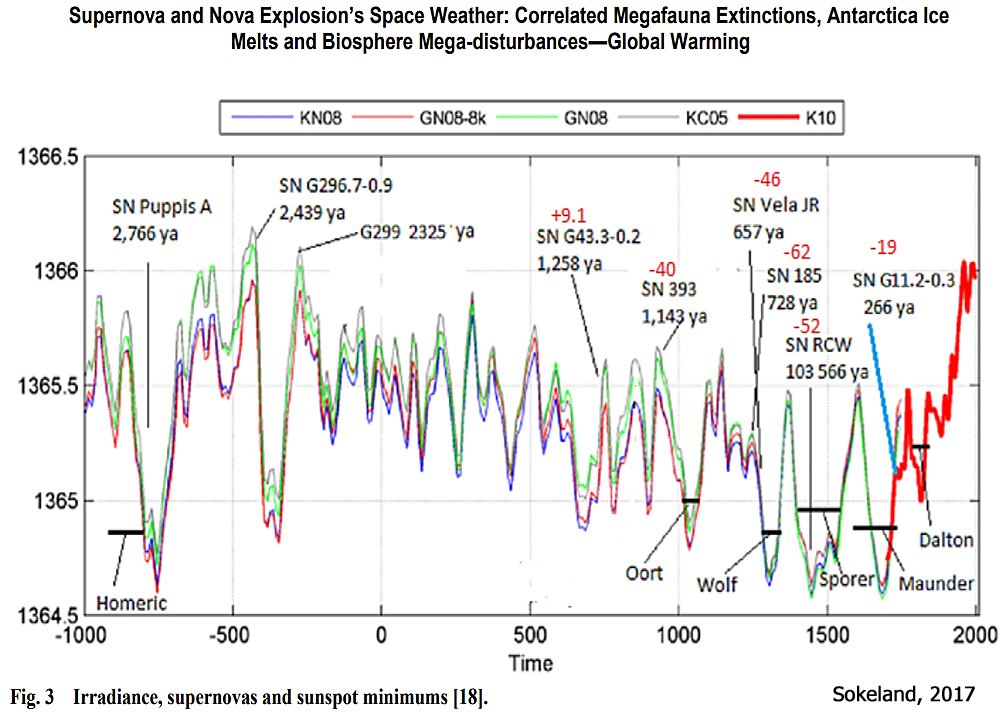 Fig. 3 shows an excellent correspondence between sunspot minimums, irradiance depressions, and supernova impact times. The six smaller dips in TSI generated by nova WZ Sagittae in the red portion of the TSI curve of Fig. 3 beginning with the Dalton minimum indicate we have been impacted by six different debris streams from the nova. The last one was in the 1965 to 1970 time region and it is the debris stream of Nova WZ Sagittae that started our current global warming episode near 1966.

Incoming supernova debris streams cause warming and melting ice caps that produce increased sea levels.  The increase in sea levels that correlates with supernova impact times is shown in Table 5.

Termination of the last ice age results due to melting of numerous supernova impacts that correlate time of impact by changing sea level and geothermal energy released for 2,800 years from the exit crater of Dr. J. Kennet’s nano-diamond meteor theory and part of the process involves Dr. O’Keefe’s tektite theory. Correlation of Dr. Frezzotti’s ice melt Antarctica data with supernova impact times over the past 800 years establishes the Global Warming model in conjunction with the November 2016 Antarctic sea ice melt.

Supernova 393 debris impacted earth near 857 AD and started the Medieval Warming Period. When the warm part of the supernova oscillation or cycle stopped and the cooling occurred, the Little Ice Age began near 1250 AD. Supernova 393 also caused the decline of the Mayan Empire near 900 AD. Supernova 393 is proposed to have caused a gamma ray attack upon earth 1,200 years ago.

Two supernovas, G299 and G296.7-0.9, impacted the earth to produce first the Roman warming period shown in Fig. 4 with the normal cooling and then a third unknown supernova created some warming with a lot of cooling dropping temperature to a minimum near 1,100 years ago (900 AD). This cold period produced the Dark Ages. Then SN 393 occurred causing more warming than cooling, but the end result was the Little Ice Age. The Dark Ages and the Little Ice Age were very disastrous periods of time for our planet’s human populations. It should be concluded that the increase in CO2 caused by supernovas 1006 and 1054 that is currently being observed is a boon to mankind and will protect us from the coming cold phase that will be caused by these currently impacting supernovas.

Consider the Minoan Warming of Fig. 4. The incoming carbon from supernova G29.6+0.1 causes the warm up as shown by the increased Greenland ice core temperatures.

Supernova Impacts and Timings of Megafauna Extinctions and Civilization Collapses

Due to the scattering of light for small particles, the sunspots will tend to disappear when a hollow sphere of small particles enters our solar system between the sun and the earth. Other signs of the presence of the small particles are the increase of animal die offs for birds, bees, and fish and a decrease in TSI (total solar irradiance).

Recent outstanding examples of animal and human die offs due to the incoming debris were the Saiga antelope in Asia in May of 2014 and people dying in  India in May of 2015-2016.  These die offs were caused by SN 1006 and would have been called megafauna extinctions if the populations were restricted to small island land areas.  The deaths of the destructive hollow spheres for supernovas 1054 and 1006 will be minimal in the beginning but will increase in intensity as the years of higher particle mass and densities are approached.  Since these supernovas are over 7,000 light-years away from our planet, the effects should not be as severe as the extinctions listed in Table 2 that were due to supernova remnants that were closer to our planet.

Supernova G32.0-4.9 impact time of 4,530 ya corresponds to the fall of Egypt’s fourth dynasty in 2494 BC. It is reported that Ancient Europeans vanished 4,500 years ago. Could supernova debris actually destroy the structure of an empire and change DNA in Europe? An impact time of 4,210 years ago matches the 4.2 Kiloyear Event.

Supernova W50 with an impact time of 17,600 ya and a declination +4 appears to have caused rapid melting of the Patagonian ice sheet 17,500 years ago and corresponds to the last glacial maximum of 18,000 years ago.

Supernova G31.9+0.0 impact time of 8,092 ya produces another correlated woolly mammoth extinction event at Lake Hill on St Paul Island in the Bering Sea 7,600 years ago. The climate change produced by this supernova caused these mammoth to die due to lack of fresh water or drought.

Supernova W51C provides the impact time of 8,130 years ago and this date coincides with the end of the 8.2 Kiloyear Event.

The W50 meteor at 12,800 ya matches the beginning of deglaciation in Antarctica 12,500 years ago. Supernova Vela has a range of impact times shown in Table 1 and Fig. 7 suggests the change of temperature date of 11,700 years ago should be used. Vela’s thermal impact in the northern hemisphere was large because it is the second closest supernova to our planet.

Supernova G82.2+5.3 in Table 3 with an impact time of 5,903 ya produced the 5.9 Kiloyear Event and it is so close in time to the Piora Oscillation that the two different events due to different supernovas are often considered the same event

Any model that claims to know the energy source for global warming must predict the past effects like Antarctic melts in Fig. 3a. Then the model can be successfully used to predict global warming effects in the future. If the proposed model cannot predict past global warming events from previously recorded independent data, the model is useless.

The SNIT model shows unusual and distinct conditions for beginning and ending ice ages. To start an ice age, a close supernova explosion like SN Monogem Ring must produce an extreme amount of iron on earth’s surface. To end an ice age a meteor from a supernova explosion must penetrate earth’s mantle and release geothermal energy over a long period of time to melt the ice.

Applying Occam’s razor, supernova debris impact is the simplest method that explains all these extinction and biosphere disturbance events because the only assumption is all debris streams travel at the same velocity from the remnant to our planet.

What Can We Do?

The debris streams of supernovas 1006 and 1054 have already began to destroy life on earth. When President Obama received a rough draft of this work, he issued an executive order to NASA stating, “Space weather has the potential to simultaneously affect and disrupt health and safety across entire continents”.

Since supernovas 1054 and 1006 are currently incoming, the planet’s average temperatures should continue to increase, global warming. Global warming will not be reduced by reducing man made CO2 emissions and in reality the only defense is to move to a cooler hemisphere, harvest CO2 from the atmosphere, or stop the incoming particles.