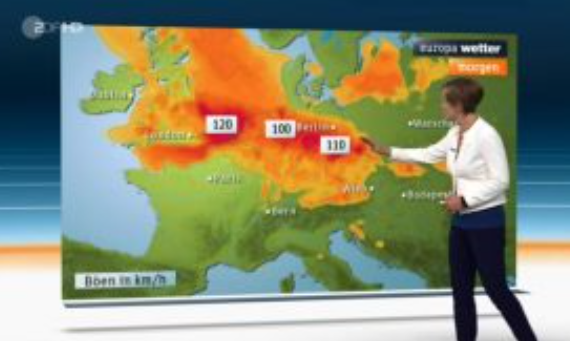 Swiss meteorologist Jörg Kachelmann says he believes German media (image above) inadequately informed the public of the danger of storm ‘Xavier’. Seven Germans lost their lives to a storm that was “nothing out of the ordinary”. Image: ZDF German Public Television.

Media warnings of storm were inadequate

As a result 7 people were killed by falling limbs and trees. Some of these deaths could have been prevented had the media issued stronger warnings of the storm’s danger before it hit, believes Kachelmann, who in his twitter video pointed out that Xavier was not an unusual storm by any means and that there should not have been so many deaths.

Why it happened has a bit to do with the media and what they could do. That’s the big difference to the USA when you look at the reporting there concerning hurricanes or even tornadoes, where the main reporting does not come after everything has happened — after all the deaths, injuries and everything laying around — but the main reporting is before where people are helped and told what to do and accompanies the people during this time with reporters out there in the storm with microphones, which here is ridiculed. But it helps.”

The media hype comes afterwards, when it’s too late

As to why the German press did so little to warn the people of the storm, Kachelmann can only speculate: Maybe they were just “infinitely lazy“. Kachelmann thinks that had the media given stronger warnings, some of the lives would have been spared.

The average observer could say that German public media seems to have a habit of underrating storms before they hit, and then exaggerating them after they leave. For example, on Monday earlier this week – after Ophelia had already hit Ireland – North German NDR radio presented Ophelia as something that no one in Ireland “could recall ever happening“.

Certainly a bit of hyperbole here.

Here one could successfully argue that this is an exaggeration and that the German media are simply just too lazy to look back into the archives, or just aren’t interested in presenting accurate reports. Joe Bastardi at Weatherbell on Tuesday highlighted Ophelia in his Daily Update and showed that Ophelia “was not as bad as Debbie in 1961“. 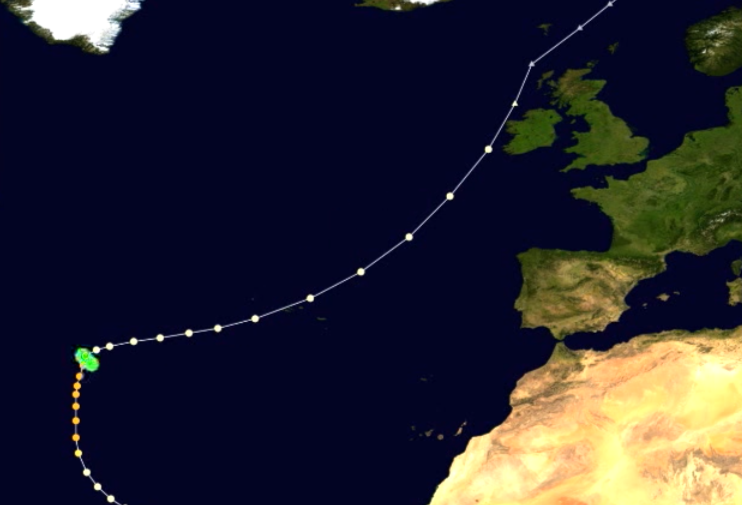 Track of Hurricane Debbie in 1961, which was worse than Ophelia. Source: cropped from Weatherbell Saturday Summary.

Maybe the pre-storm downplaying and post-storm hyping is unwittingly intended by the German media. By neglecting to warn people beforehand, they get to blare out bigger, more spectacular headlines of death and destruction after the storm passes.

Of course no one seriously thinks it’s intentional on the German media’s part, yet the bottom line is that the German public is getting a distorted reporting both before and after the storm. They deserve far better for their exorbitant mandatory public television and radio fees.

And at his Saturday Summary of October 14, the veteran meteorologist blasted the hurricane hysteria coming from the usual US activists. He shows how Hurricane Faith in 1966 remained a hurricane far north of Ireland, and didn’t peter out until it reached the North Pole! There’s nothing unusual about Ophelia. Bastardi added:

I feel very strongly about these people who are using these storms […] for their agenda, and so what I’m doing here is that I’m letting you know that I’m showing you beforehand that there is visible evidence that this has happened before.”