This poses a huge dilemma for the activists and alarmists who are urgently pressing to transform society –based on the fear and belief that the globe will warm rapidly if we don’t act now.

The other fear is that rising oil consumption over the next 25 more years accompanied stalling global temperatures will forever expose climate science as a ruse.

Die Zeit writes that OPEC is sure that the planet is still years away from peak oil demand, and the reason is because cars will continue to be mostly powered by petroleum even beyond 2040. Obviously a number of leading energy experts believe electric cars will remain a pipe dream for quite some time. 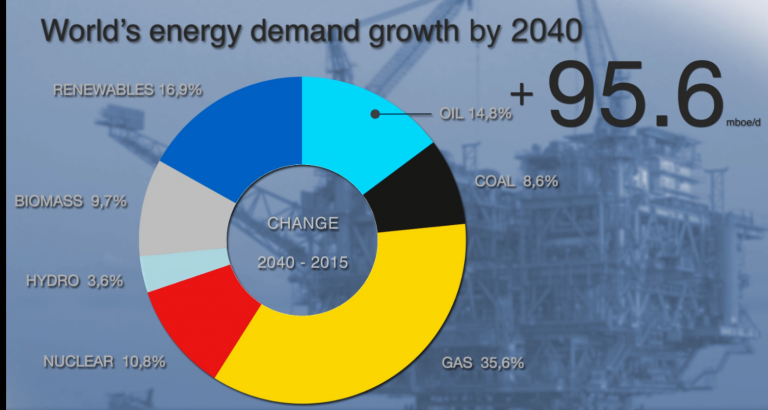 Firstly OPEC sees the world population growing from 7.6 billion today to 9.2 billion by 2040 and global GDP growing by a whopping 126%. That’s all going to require lots of reliable and efficient energy. The good news is that overall energy efficiency will increase, as only 96% more energy will be needed to power the 126% GDP boost.

Most of the energy increase will come from India and China. Moreover, the global average standard of living will also grow strongly as the per capita energy use will be much higher. OPEC projects that much of the added energy demand will be supplied by natural gas (see chart above). Part of the increased demand will be met by coal and oil.

OPEC also foresees continued domination by the internal combustion engine for passenger cars, even in 2040:

OPEC also projects there will be more than 2 billion automobiles on the world’s roads by 2040, almost double today’s number. Over 80% of these will continue to be powered by internal combustion engines. The electric vehicle age appears to be something for the late 21st century. Visions of a near zero carbon society within the next 30 years are more fantasy than reality.

Not surprisingly, most of the increased energy demand will come from Asia and Africa. The richer, developed OECD countries will see little growth in energy demand.

The OPEC video summarizes by saying that it is “committed to reducing energy poverty“. That target of course would make a huge contribution to alleviating the overall misery that still plagues many poor countries. Oil, coal and gas will continue to play the leading role.

Of course, jet-setting climate activists and alarmists would like to deny poor countries access to affordable and reliable energy.

Good luck with that.