Over the recent days we’ve been hearing about record snowfall in Montana, record low temperatures in Minnesota and Ontario, New York City “blowing away” a 103-year old record, vicious cold gripping Lebanon, PA. Moreover, Arctic sea ice and Greenland ice have surprised climatologists with a comeback over the past year.

UPDATE: And now the UK braces for 3 weeks of unusual cold.

What is more, the NOAA has just officially announced the return of the La Niña, after earlier this year an El Niño had been forecast instead.

“Gangbusters cold” in the works

And lately we’ve been hearing a number of meteorologists warning of a harsh coming winter for both Europe and USA.

At his Friday Daily Update, veteran meteorologist Joe Bastardi warns of a “fierce cold” being on the table for this winter for the United States. Bastardi says he does not believe the US climate models at all, and instead could even be as harsh of the notoriously cold 2013 winter. 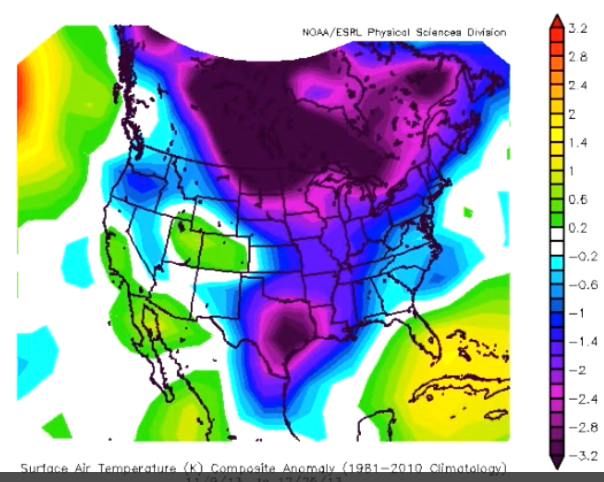 Bastardi believes the month of December will in fact turn out to be the opposite of what was projected by the US weather models, which foresaw a warm December. See his latest Saturday Summary at Weatherbell.

In his Friday Daily Update Bastardi thinks the cold will be “gangbusters” and that there is a real chance for a “December to remember”. All in all, the Pennsylvania State University meteorologist sees an excellent ski season in the works for the USA.

-40°C for Christmas In Central Europe?

Over in Europe, there have been a growing number of warnings of a “winter of the century“. For example the German nachrichten.de here reports Christmas temperatures of -40°C!

Naturally such forecasts need to be viewed with great skepticism as they are highly speculative. Long-term prediction methods may indicate which way a winter is tending, but I wouldn’t believe any forecast 6 to 8 weeks out.

Nachrichten.de cites information from the Augsburg Meteorological Institute and the Hamburg Weather Warning station. The Federal Office for Weather Observations advises citizens “to prepare for an ice cold Christmas.”“Snowmageddon”?

The express.co.uk warns of a “SNOWMAGEDDON”, thanks to a La Niña bringing a “Big Freeze”. The express.so.uk  writes that “winter weather 2017 is set to be the harshest for years“.

For the winter of 2017/2018 the PDO will bring a winter of deadly blizzards and killer freezes as a perfect storm of catastrophic weather systems gather. Analytical meteorologist Tyler Sotock suggested America was facing Snowmaggedon. And spokesman for another YouTube weather channel Hurricane and Winter Tracker warned of chaos.”

While wild speculation swirls, one thing seems certain: just as Joe Bastardi shows at his Saturday Summary, the US forecasts of a warm November/December period across Canada and the US East are looking more flawed than ever.