A new paper by renowned Swedish sea level expert Prof. Axel Mörmer published in the International Journal of Earth & Environmental Sciences dumps lots of cold water on the premise that today’s sea level rise is caused by man and is unusual.

Mörner’s paper looks back at the last 500 years of sea level rise and shows that natural variables are the major drivers, and not man-made CO2-driven global warming.

Previously no study in the Fiji Islands had been devoted to the sea level changes of the last 500 years and so no serious prediction can be made. What was needed was a good understanding of the sea level changes today and in the past centuries. Mörner’s study helps to fill that gap and to answer questions concerning today’s sea level rise.

The Swedish scientist summarizes in the paper’s abstract that there is a total absence of data supporting the notion of a present sea level rise; on the contrary all available facts indicate present sea level stability. 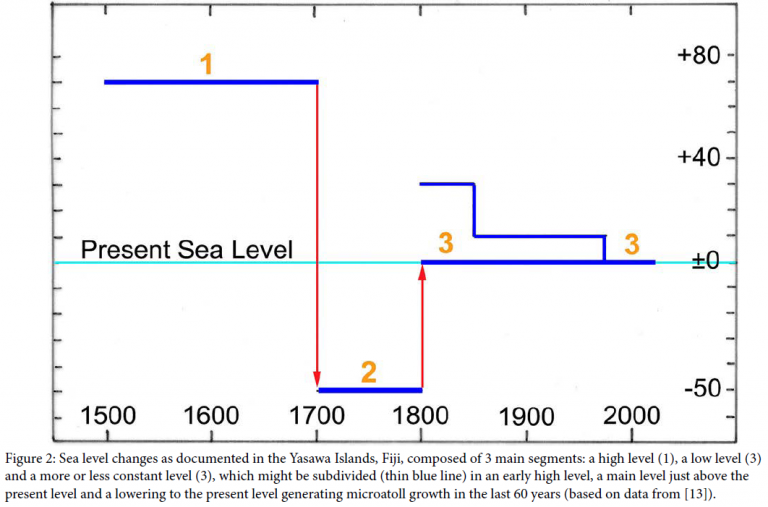 Sea level changes over the past 500 years at Ysawa Islands, Fiji, show that sea level was +70 cm high in the 16th and 17th centuries, -50 cm low in the 18th century and that stability (with some oscillations) prevailed in the 19th, 20th and early 21st centuries.

This, Mörner writes, is almost identical to the sea level change documented in the Maldives, Bangladesh and Goa (India), and thus would point to a mutual driving force.

The pattern is the same at other locations: 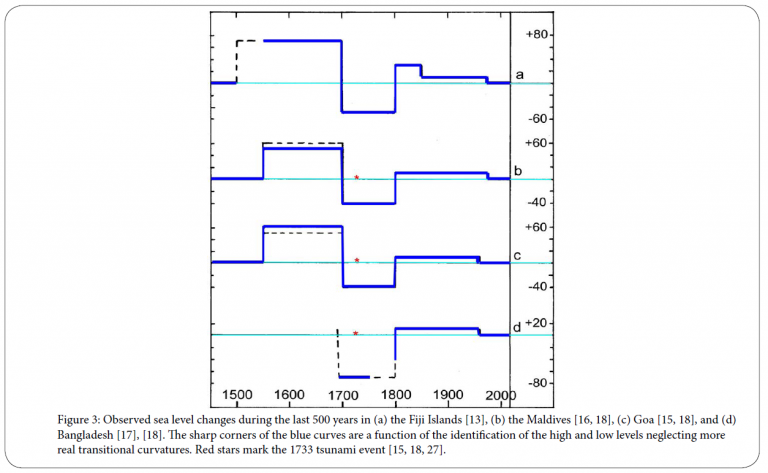 The paper also states that the recorded sea level changes are anti-correlated with the major changes in climate during the last 600 years. Therefore, Mörner concludes that glacial eustasy cannot be the driving force.

This means there are no traces of a present rise in sea level; on the contrary: full stability.”

Nils-Axel (”Niklas”) Mörner took his Ph.D. in Quaternary Geology at Stockholm University in 1969. Head of the institute of Paleogeophysics & Geodynamics (P&G) at Stockholm University from 1991 up to his retirement in 2005. He has written many hundreds of research papers and several books. He has presented more than 500 papers at major international conferences. He has undertaking field studies in 59 different countries. The P&G institute became an international center for global sea level change, paleoclimate, paleoseismics, neotectonics, paleomagnetism, Earth rotation, planetary-solar-terrestrial interaction, etc.  Among his books; Earth Rheology, Isostasy and Eustasy (Wiley, 1984), Climate Change on a Yearly to Millennial Basis (Reidel, 1984), Paleoseismicity of Sweden: a novel paradigm (P&G-print, 2003), The Greatest Lie Ever Told (P&G-print, 2007), The Tsunami Threat: Research & Technology (InTech, 2011), Geochronology: Methods and Case Studies (InTech, 2014), Planetary Influence on the Sun and the Earth, and a Modern Book-Burning (Nova, 2015).

23 responses to “Renowned Sea Level Expert: “NO TRACES OF A PRESENT RISE IN SEA LEVEL; On The Contrary: Full Stability””