Scientists Affirm: ‘No, The Arctic Is Not Melting’ … ‘Nothing Has Changed Since 1900’

Disconnected From the Observations’ 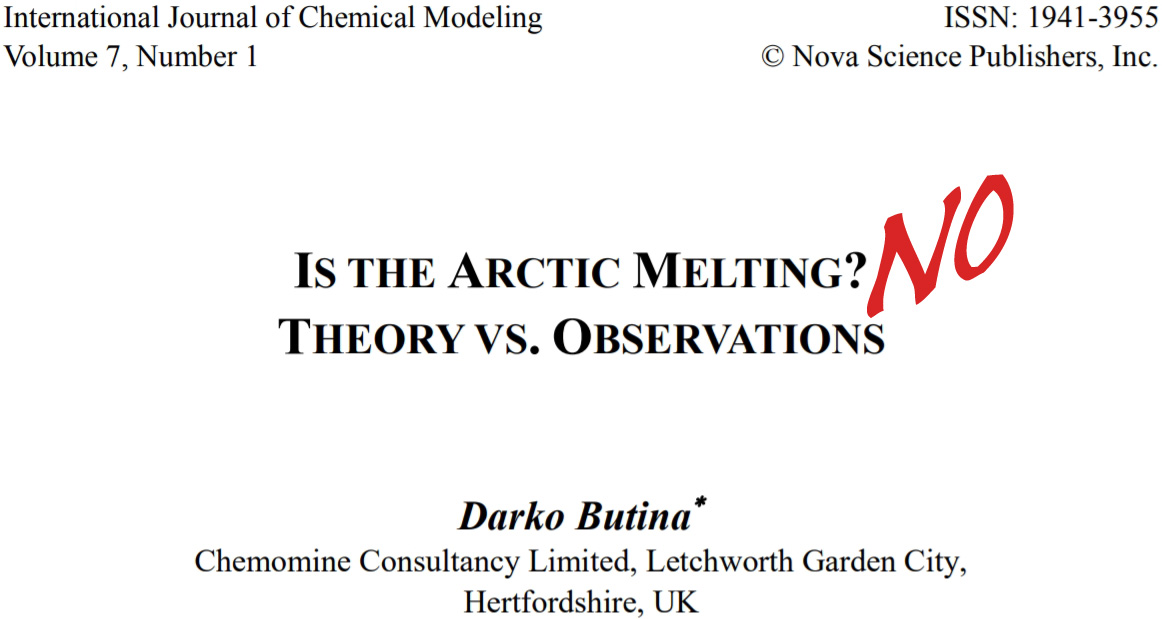 Extensive analysis of temperature trends in the Arctic reveals that there has been no detectable long-term change since the beginning of the 20th century, and thus predictions of a sea ice-free Arctic in the coming decades due to dramatically rising temperatures are not rooted in observation. 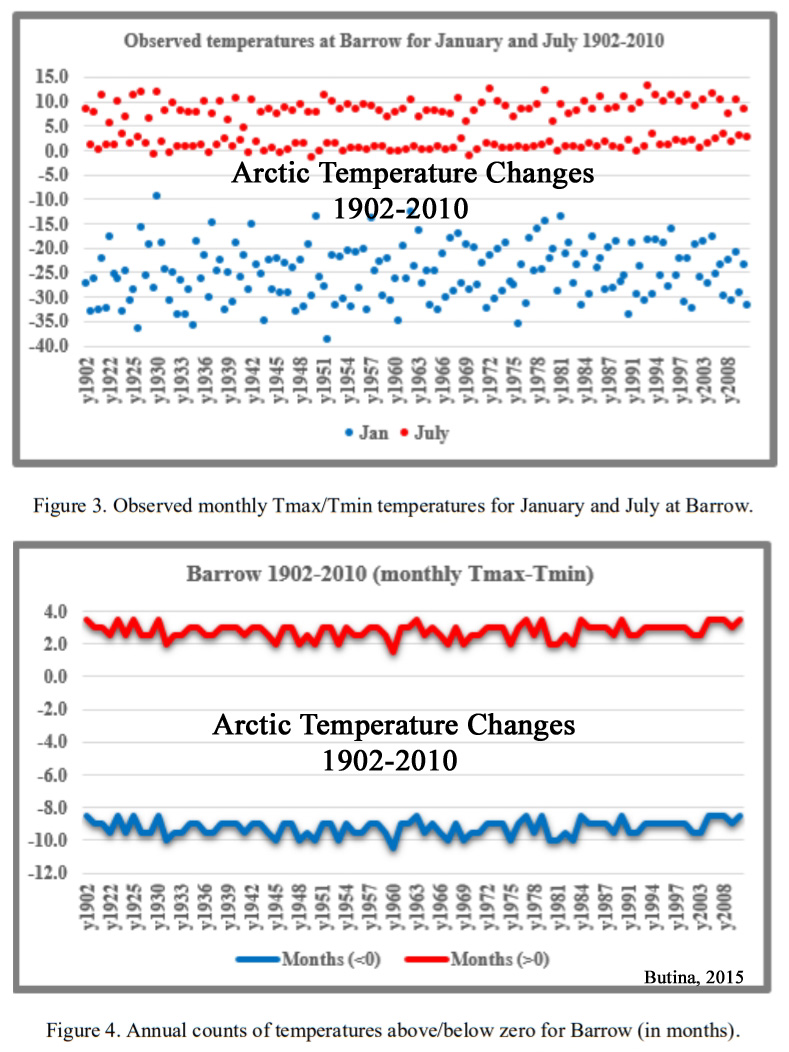 IS THE ARCTIC MELTING?

[T]he Arctic Circle is the most extreme place on our planet where seasonal changes can range from +35.0°C in July and -65.0°C in February; […] on average 75% of the year is spent below the melting point of water [and] on average the Arctic will be covered by ice/snow for the same proportion of time, i.e., 75% or 9 months of the year.

The same seasonal extreme variations in air temperatures are also observed in ice cover variations observed in the Arctic where the winter‘s ice cover can be between 14- 16 million km2, while during summer the area covered can vary between 4 and 8 million km2.  Based on observations, dating back to 1900, it can be concluded that it is physically impossible for the Arctic to be ice/snow free in the foreseeable future since the air temperatures were as cold in 2013 as they were in 1900.

Since ice cannot melt below 0.0°C, all these observations point towards the Arctic remaining ice-covered for the next 100 years. It must also follow that any theory predicting imminent melting of the Arctic ice cap cannot be based on thermometer-recorded data and, therefore, must be wrong and will merely be an artefact of using the term temperature where there is no true association with the calibrated thermometer, the instrument used to measure temperature in all physical, medical and engineering sciences.

So, what are the hard facts about Arctic that are based on the observations made by calibrated thermometers at 20 stations across the Arctic Circle and which conclusions can be made based on those observations?

2. It is impossible to separate the youngest from the oldest years using thermometerbased daily or monthly Tmax/Tmin data

3. The total ranges observed in daily Tmax/Tmin data can be as high as 100.0°C and as low as 75.0°C making the Arctic Circle the most variable and extreme area on our planet therefore making any accurate forecasting of future temperature patterns and trends impossible

4. The switches between the extreme hot to extreme cold temperatures are very frequent and very unpredictable and can occur within the same month, same year or between two consecutive years

Based on the facts above only one conclusion can be made in reference to the putative melting of the Arctic: historical thermometer-based data tells us that between 1900 and 2014 arctic temperatures were for 75% of the time consistently long distance below 0.0°C; the ice cover in the winter months is still consistently more than 14,000,000km2 and, therefore, it is physically impossible for the Arctic to be already melting since nothing has changed since 1900 till present day. The only sensible forecast for the future would be to expect the same extreme events to continue until thermometer-based evidence tell us otherwise.

Let me conclude this paper by answering the question asked in the first part of the title by a categorical No, the Arctic is not melting. As long as temperatures remain the same as they have been for the last 100 years the Arctic will remain frozen in the long winter months and partly melt during very short summer months.

The answer to the second question is that the theory of global warming is completely disconnected from the observations since their definition of temperature is based on some theoretical number that has nothing to do with the temperature that is measured by calibrated thermometer and, most importantly, used as an international standard by the scientific community. Since the theory is clearly wrong about forecasting the temperature patterns in the Arctic, all other predictions made by the theory must be wrong too. 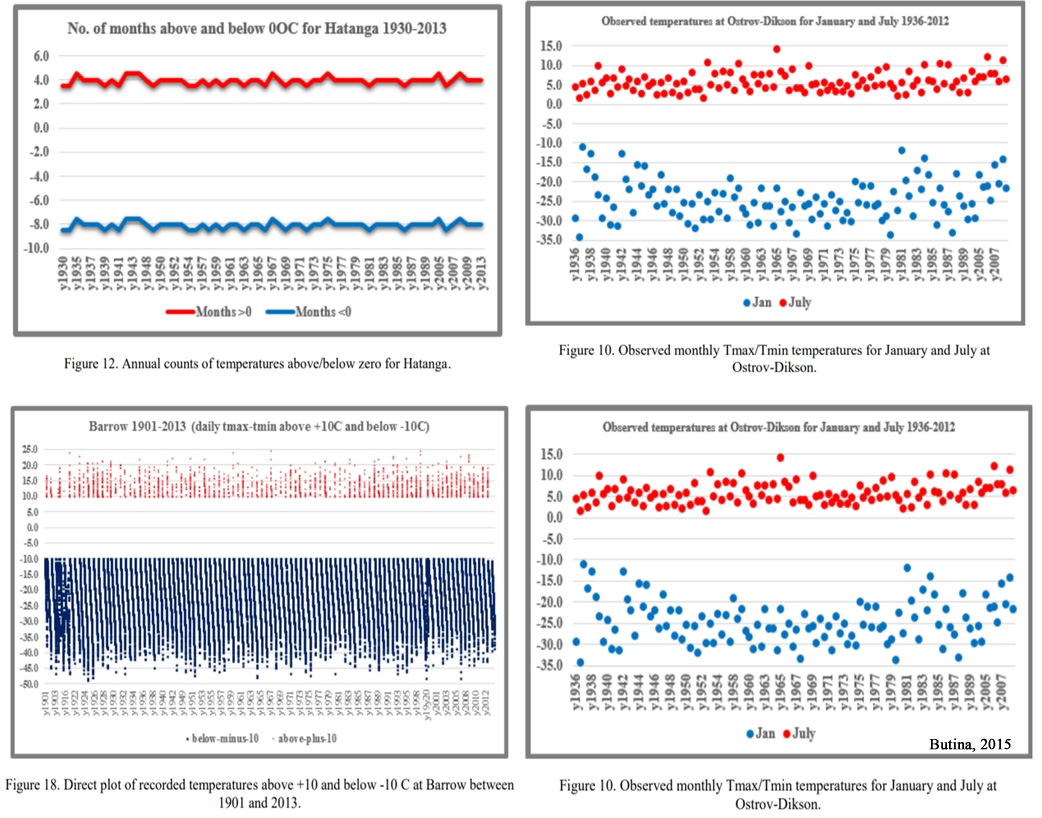 New Paper: No  Greenland Temperature Or Sea Ice Changes Since 1600 Either

“Our study aims to investigate the oceanographic changes in SW Greenland over the past four centuries (1600-2010) based on high-resolution diatom record using both, qualitative and quantitative methods.  July SST during last 400 years varied only slightly from a minimum of 2.9 to a maximum of 4.7 °C and total average of 4°C. 4°C is a typical surface water temperature in SW Greenland during summer. … The average April SIC was low (c. 13%) [during the 20th century], however a strong peak of 56.5% was recorded at 1965. This peak was accompanied by a clear drop in salinity (33.2 PSU).”

Like The Arctic, Antarctica Has Not Warmed In The Last Century Either

“[N]o continent-scale warming of Antarctic temperature is evident in the last century.”

Antarctica’s Ice Sheet Has Been Gaining Mass Since 1800

“Our results show that SMB [surface mass balance] for the total Antarctic Ice Sheet (including ice shelves) has increased at a rate of 7 ± 0.13 Gt decade−1 since 1800 AD…”

In sum, there is nothing thermally unusual occurring today in either the Arctic or Antarctic, precluding the clear detection of an anthropogenic temperature or ice-melt signal in the polar regions.