Sometimes you have to wonder which are the biggest fraud: Germany’s claim that its cars are clean, or its claim of being a leader in climate protection. Both, it turns out, are very fake and even downright frauds.

While German Chancellor Angela Merkel and German activists like going around and scolding Donald Trump for his “irresponsible” stance on “greenhouse” gas emissions, it is coming to light that Germany’s climate posturing is indeed a total swindle.

While USA’s greenhouse gas emissions have declined impressively over the past decade, Germany’s have gone nowhere.

And now Cleanenergywire.org here reports that Germany again this year (2017) will again fail to reduce its CO2 equivalent emissions for the 9th year running. Ironically one of the reasons cited for this year by Cleanenergy.org is “cold weather” (again). 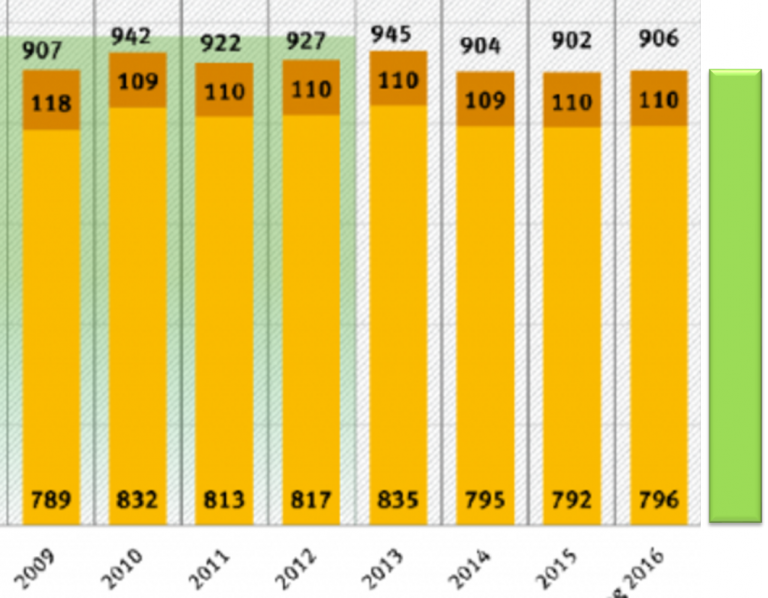 Germany’s CO2 equivalent CO2 greenhouse gas emissions in metric tonnes since 2009. This year (2017) CO2 equivalent emissions are expected to be slightly over those seen in 2016. Data taken from German Ministry for environment.

The reality is that Trump and America has nothing to learn from the Green-preaching Germans, except on how to deceive and mislead the public. Cleanenergy.org writes that the higher energy demand is “triggered by economic growth and colder weather“.

Merkel’s glaring failure, however, did not prevent her from taking a swipe at Trump, the Handelsblatt reports. Unfortunately for Merkel there is no disguising Germany’s failure to meet its own imposed targets. The Environment Ministry says the 2017 emissions figures are “a disaster for Germany’s international reputation as a climate leader.”

CO2 emissions reduction is pie-in the sky, another hoax

Whatever gets decided in Bonn will be pure meaningless self-deception. The fact remains that China, India and the rest of the developing world are going to continue boosting their fossil fuel energy consumption and CO2 emissions are going to keep rising for quite awhile. The recent OPEC report makes that very clear.

Some advice for Merkel: Forget the CO2 reductions. Cutting Germany’s puny 2% global share would theoretically lead to a temperature reduction of 1 or 2 hundredths of a degree Celsius, meaning some 100 trillion euros per °C. It’s pure economic insanity. Take the idea and discard it quickly into the dustbin for good.