By now, after some 30 years of dire warnings, you’d think that the warming of the globe and ice mass reduction would be much further along than it actually is. Yet there are a number of major signs that show the opposite (cooling and freezing) are happening:

1. Arctic ice has stabilized over the past decade

Tony Heller at realclimatescience.com here reports that Arctic sea ice volume is in fact up 15%, from 13,000 km³ to 15,000 km³ and that there has been a huge expansion of thick ice into the East Siberian Sea. The following is Heller’s comparator showing the difference between today and 10 years ago:

Obviously over the past 10 years Arctic sea ice was supposed to do the opposite, i.e. shrink 15%. Climate scientists, who warned the melting of the 2000s would accelerate, are now left baffled and speechless.

The EL Nino Southern Oscillation (ENSO), a measure of equatorial Pacific sea surface temperatures, is at its coldest level in years, boding that more global cooling lies ahead for the planet in the months ahead. Just months ago, experts were predicting another warming El Nino. They were wrong. Moreover, the latest forecast sees La Nina conditions extending into next spring: Surface temperatures at the equatorial Pacific (where it really counts) have plummeted by 1-2°C since June of this year, hurricane expert Phillip Klotbach tweeted recently: 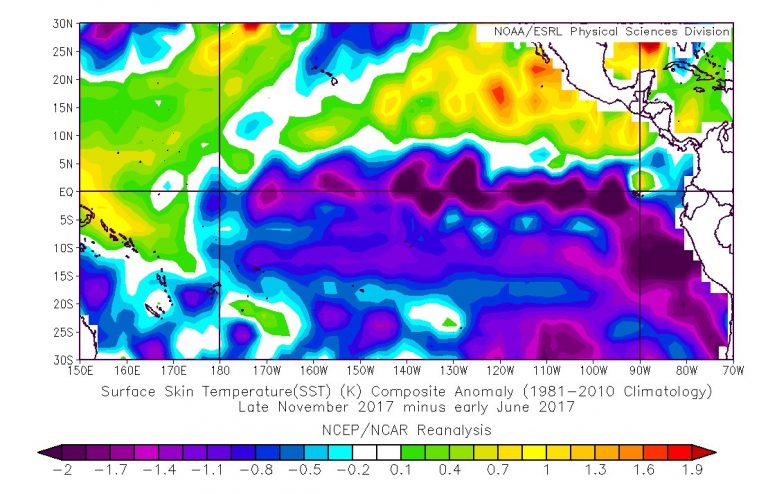 And because there is a lag of about 6 months between the ocean surface temperature and satellite global lower troposphere temperatures, the La Nina will ensure that 2018 will be a cooler year at the surface globally.

Moving to Siberia, we see that an unexpected cold gripped the region, with temperatures in many parts of Siberia recently plummeting 20°F below normal. The Weather Channel reports here: “Parts of Siberia are Colder Than Minus 60 Degrees Fahrenheit, and It’s Only November“.

Forecasters are now warning that this cold could soon shift over to North America and Europe.

Greenland, often claimed by climate alarmists to be the “canary in the coal mine”, has seen its ice sheet gain 250 billion metric tonnes since September 1, 2017. This is 40 billion tonnes above the 1981-2010 average. 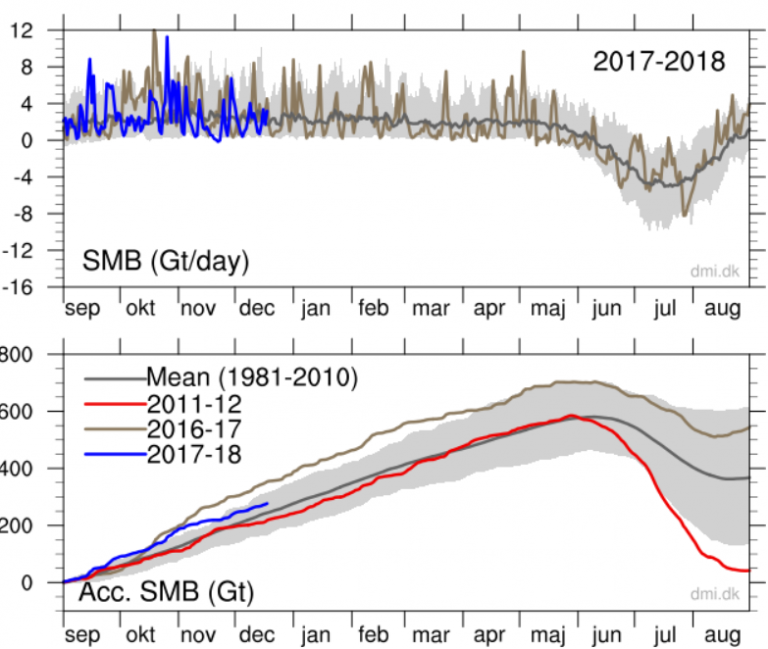 Warming is not supposed to create 40 billion tonnes of ice. That’s almost 6 tonnes for each person on the planet.

Northern Hemisphere snow and ice cover for the month of October finished 20% above the mean. In fact the mean of the past 5 years for October has been the highest for any 5-year period since measurements began 50 years ago. 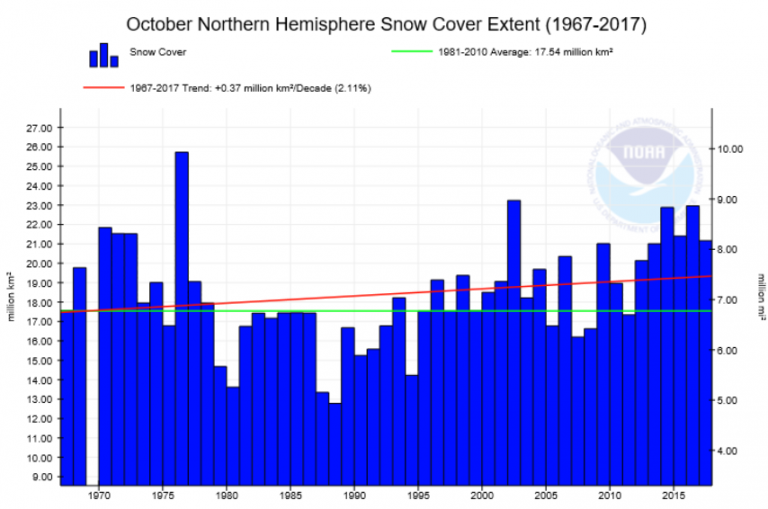 The same is true for the month of November: it too has seen a robust upward trend in snow and ice cover over the past 30 years.

The current solar cycle 24 is the third weakest since the systematic observation of solar cycle activity began in 1755. Only solar cycles nos. 5 and 6 (1798…1823 during the Dalton Minimum) were weaker. A number of distinguished scientists and dozens of scientific publications warn that the planet may in fact be entering a period of global cooling. The upcoming solar cycle 25 also is expected to be a weak one.

In summary, there are other signs showing cooling taking place or coming up; above is just a sampling. Let’s not forget the possible eruption of Agung in Indonesia. A major eruption would send global temps into the fridge for a couple of years.

The bottom line: Don’t let all the hype about runaway warming make you think the planet is roasting. There’s plenty of unexpected cold around – cold that was never supposed to be. And the only thing you’re going to hear from the alarmists to explain this are a lot of excuses.

54 responses to “7 Major Signs The Globe’s Surface Has Been Cooling, And Will Continue To Cool”