Browse: Home / 2017 / December / 25 / Snowcover Increasing Since 1950s, But Newsweek’s Reality Is That Christmas Snow May Soon Be History

With the advent of this cheery holiday comes a somber warning from Newsweek, purveyor of climate doom.

“[A]s global temperatures rise due to climate change, snow on Christmas Day could increasingly become a rarity—even a distant memory.”

Contrary to Newsweek‘s claims, however, snow cover across the Northern Hemisphere (NH) has been increasing in recent decades. 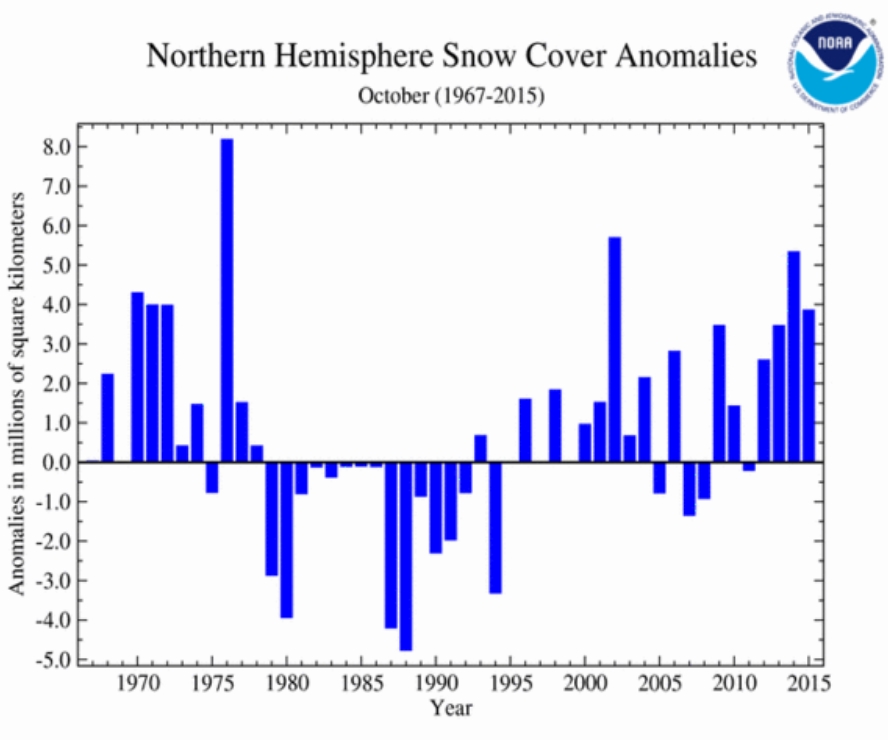 In the Southern Hemisphere, snow and ice have been expanding in the Antarctic region for centuries (Thomas et al., 2017), and Antarctica is projected to continue gaining ice mass in the decades to come (Lenaerts et al., 2016).

Apparently the journalists penning climate alarm scenarios that warn readers white Christmases are on the way out in the NH haven’t been keeping up with the latest scientific publications.

Heavy 30-day snowfall amounts were evaluated to identify spatial and temporal characteristics east of the Rockies in the United States during the period 1900-2016. An extensive data assessment identified 507 stations for use in this long-term climate study. The top 30-day heavy snowfall amount and the average of the top five 30-day heavy snowfall amounts were examined. … The northern Great Plains, Great Lakes, Midwest, and Northeast experienced more top five periods [more snow] in the second half of the 117-year period [1958-2016], where most of the southern states experienced top five periods throughout the study period. Examining extremes at periods beyond the daily event and less than the season contributes to our knowledge of climate and provides useful information to snow-sensitive sectors. 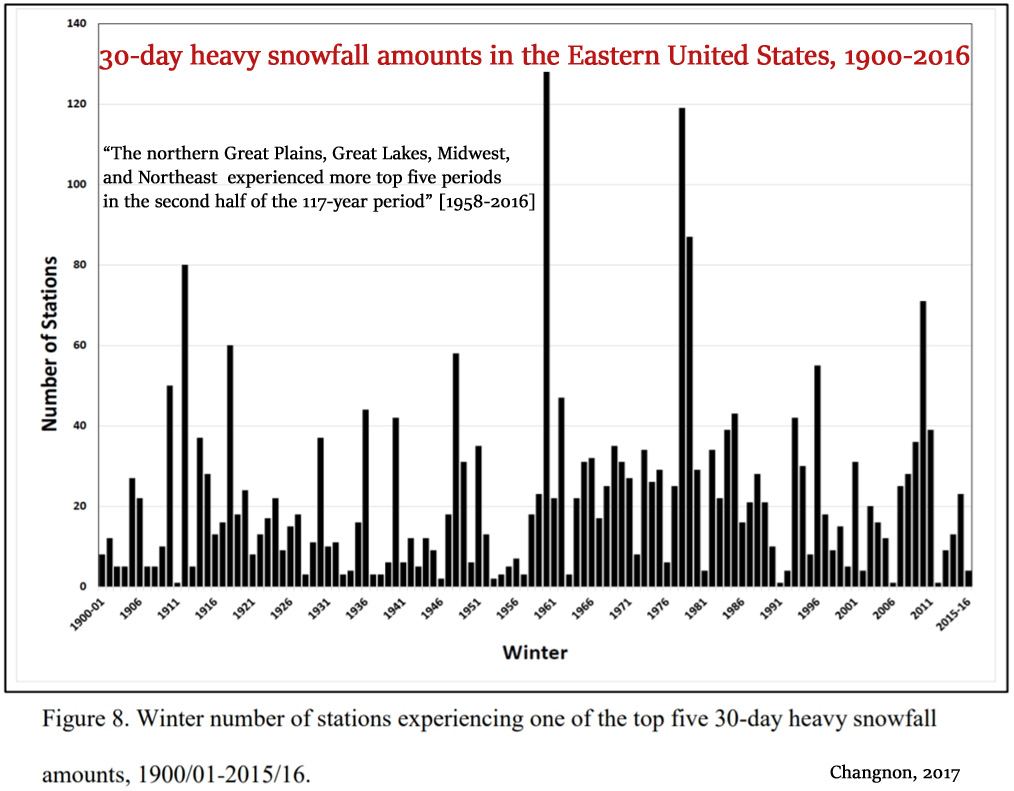 Long-term observations of increasing snow cover in the western Cairngorms [Scotland] … For 13 consecutive winters between 2002 and 2015, the date for the onset of continuous winter snow cover, and subsequent melt, was recorded on slopes of north and north-easterly aspect at altitudes between 450m and 1111m amsl. Results show that the period of time during which snow is continuously present in the catchment has increased significantly by 81 (±21.01) days over the 13-year period, and that this is largely driven by a significantly later melt date, rather than earlier onset of winter snow cover. 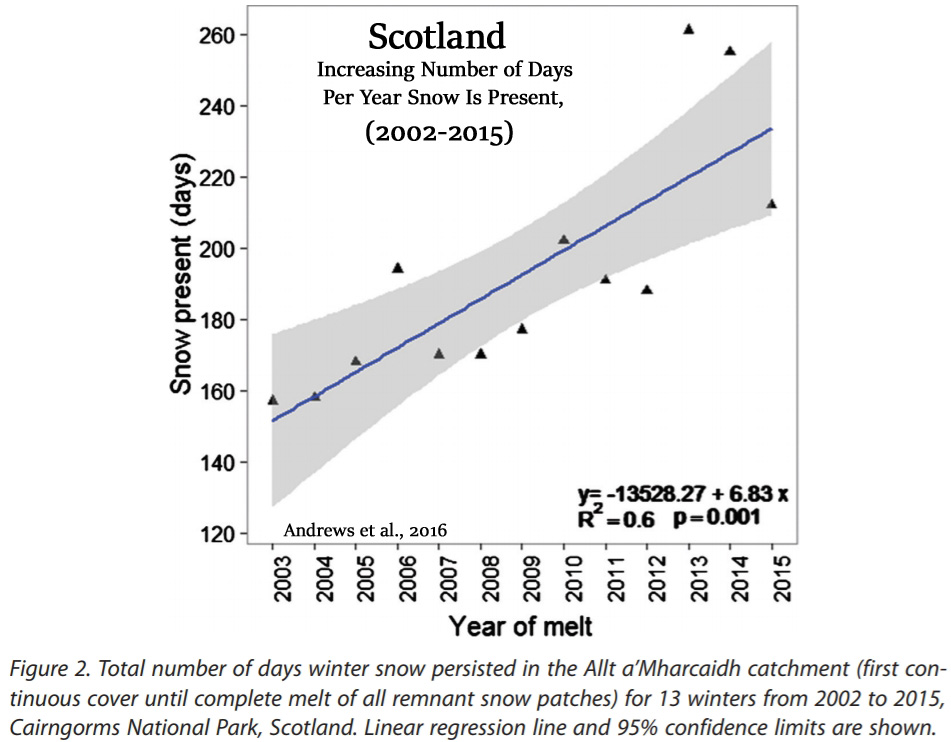 Data revealed 713 blizzards over the 55 years, with a mean of 13 events per season. Seasonal blizzard frequency ranged from one blizzard in 1980/81 to 32 blizzards in 2007/08. Federal disaster declarations resulting from blizzards totaled 57, with more than one-half of them occurring in the twenty-first century. Storm Data attributed 711 fatalities during the 55-yr study period, with an average of one individual per event; 2044 injuries were reported, with a mean of nearly three per blizzard. Property damage totaled approximately $9.11 billion in unadjusted dollars, with an approximate mean of $12.6 million per storm. Seasonal blizzard frequencies displayed a distinct upward trend, with a more substantial rise over the past two decades. … The modeled increase in blizzard activity showed a nearly fourfold upsurge between the start [1960] and end [2014]of the study period at 5.9 and 21.6 blizzards, respectively. On the basis of current model trends, the expected blizzard total for a season is 32 blizzards by 2050; uncertainty s on whether the linear trend will continue or stabilize in the near future. 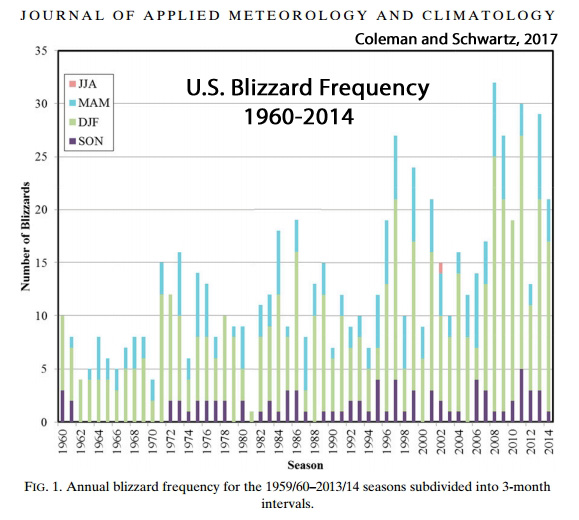 Ice rises are a useful resource to investigate evolution and past climate of the DML coastal region. We investigate Blåskimen Island ice rise, one of the larger isle-type ice rises at the calving front of the intersection of Fimbul and Jelbart Ice Shelves, using geophysical methods. … Using the Input-Output method for a range of parameters and column setups, we conclude that Blåskimen Island has been thickening over the past nine years [2005-2014]. Thickening rates cannot be determined precisely, but ensemble results show that thickening rate averaged over the ice rise varies between 0.07 m a−1 and 0.35 m a−1 [per year]. On longer timescales, we speculate that  the summit of Blåskimen Island has been stable within several kilometers at least in the past ∼600 years but no longer than several millennia.

However, a recent analysis (Turner et al., 2016) has shown that the regionally stacked temperature record for the last three decades has shifted from a warming trend of 0.32 °C/decade during 1979–1997 to a cooling trend of − 0.47 °C/decade during 1999–2014. … This recent cooling has already impacted the cryosphere in the northern AP [Antarctic Peninsula], including slow-down of glacier recession, a shift to surface mass gains of the peripheral glacier and layer of permafrost in northern AP islands.

“Pamir–Karakoram–Western-Kunlun-Mountain (northwestern Tibetan Plateau) Glacier Anomaly” has been a topic of debate due to the balanced, or even slightly positive glacier mass budgets in the early 21st century. Here we focus on the evolution of glaciers on the western Kunlun Mountain and its comparison with those from other regions of the Tibetan Plateau. The possible driver for the glacier evolution is also discussed. Western Kunlun Mountain glaciers reduce in area by 0.12 % yr−1 from 1970s to 2007–2011. However, there is no significant area change after 1999. Averaged glacier thickness loss is 0.08 ± 0.09 m yr−1 from 1970s to 2000, which is in accordance with elevation change during the period 2003–2008 estimated by the ICESat laser altimetry measurements. These further confirm the anomaly of glaciers in this region. Slight glacier reduction over the northwestern Tibetan Plateau may result from more accumulation from increased precipitation in winter which to great extent protects it from mass reductions under climate warming during 1961–2000. Warming slowdown since 2000 happening at this region may further mitigate glacier mass reduction, especially for the early 21st century.

This study investigated the surge dynamics of Aavatsmarkbreen, a glacier in Svalbard and its geomorphological impact based on remote sensing data and field observations. The main objective was to analyse and classify subglacial and supraglacial landforms in the context of glacial deformation and basal sliding over a thin layer of thawed, water-saturated deposits. The study also focused on the geomorphological evidence of surge-related sub- and supraglacial crevassing and glacier front fracturing. From 2006 to 2013, the average recession of Aavatsmarkbreen was 363 m (52 m a−1). A subsequent surge during 2013–2015 resulted in a substantial advance of the glacier front of over 1 km and an increase in its surface area of more than 2 km2.

We suggest the Lambert-Amery [Antarctica] glacial system will remain stable, or gain ice mass and mitigate a portion of potential future sea level rise over the next 500 years, with a range of +3.6 to -117.5 mm GMSL-equivalent.

82 responses to “Snowcover Increasing Since 1950s, But Newsweek’s Reality Is That Christmas Snow May Soon Be History”