To Detect Or Measure In The Real Atmosphere’

“In particular, formula 5 (and 6) as presented here, totally rules out
any possibility that a 33°C greenhouse effect of the type proposed
by the IPCC in their reports can exist in the real atmosphere.”
– Holmes, 2017

In a new peer-reviewed scientific paper published in the journal Earth Sciences last December (2017), a Federation University (Australia) Science and Engineering student named Robert Holmes contends he may have found the key to unlocking our understanding of how planets with thick atmospheres (like Earth) remain “fixed” at 288 Kelvin (K), 740 K (Venus), 165 K (Jupiter)…without considering the need for a planetary greenhouse effect or changes in atmospheric CO2 concentrations.

Perhaps the most fundamental conceptualization in climate science is the “thought experiment” that envisions what the temperature of the Earth might possibly be if there was no greenhouse effect, greenhouse gases, or atmosphere.

“The size of the greenhouse effect is often estimated as being the difference between the actual global surface temperature and the temperature the planet would be without any atmospheric absorption, but with exactly the same planetary albedo, around 33°C. This is more of a ‘thought experiment’ than an observable state, but it is a useful baseline.”

Simplistically, the globally averaged surface temperature clocks in at 288 K.   In the “thought experiment”, an imaginary Earth that has no atmosphere (and thus no greenhouse gases to absorb and re-emit the surface heat) would have a temperature of only 255 K.  The difference between the real and imagined Earth with no atmosphere is 33 K, meaning that the Earth would be much colder (and uninhabitable) without the presence of greenhouse gases bridging the hypothetical “heat gap”.

As a “thought experiment”, the critical heating role for water vapor droplets and CO2 concentrations lacks real-world validation.  For example, the Earth’s oceans account for 93% of the planet’s heat energy (Levitus et al., 2012), and yet no real-world physical measurements exist that demonstrate how much heating or cooling is derived from varying CO2 concentrations up or down over a body of water in volume increments of parts per million (0.000001).  Consequently, the CO2 greenhouse effect is a hypothetical, model-based conceptualization.

And in recent years, many scientific papers have been published that question the fundamentals of not only the Earth’s hypothetical greenhouse effect, but the role of greenhouse gases for other planets with thick atmospheres (like Venus) as well Hertzberg et al., 2017, Kramm et al., 2017, Nikolov and Zeller, 2017 , Allmendinger, 2017, Lightfoot and Mamer, 2017, Blaauw, 2017, Davis et al., 2018).   The Holmes paper highlighted here may just be among the most recent.

Holmes used the derived pressure/density/mass numbers for each planetary body.   He then calculated the planets’ temperatures with these figures.

Venus’ temperature was calculated to be 739.7 K with the formula.  Its measured temperature is 740 K.  This indicates that the formula’s accuracy is within an error range of just 0.04% for Venus.

The impressive accuracy of the formula is illustrated below in Table 1. and Figure 2. 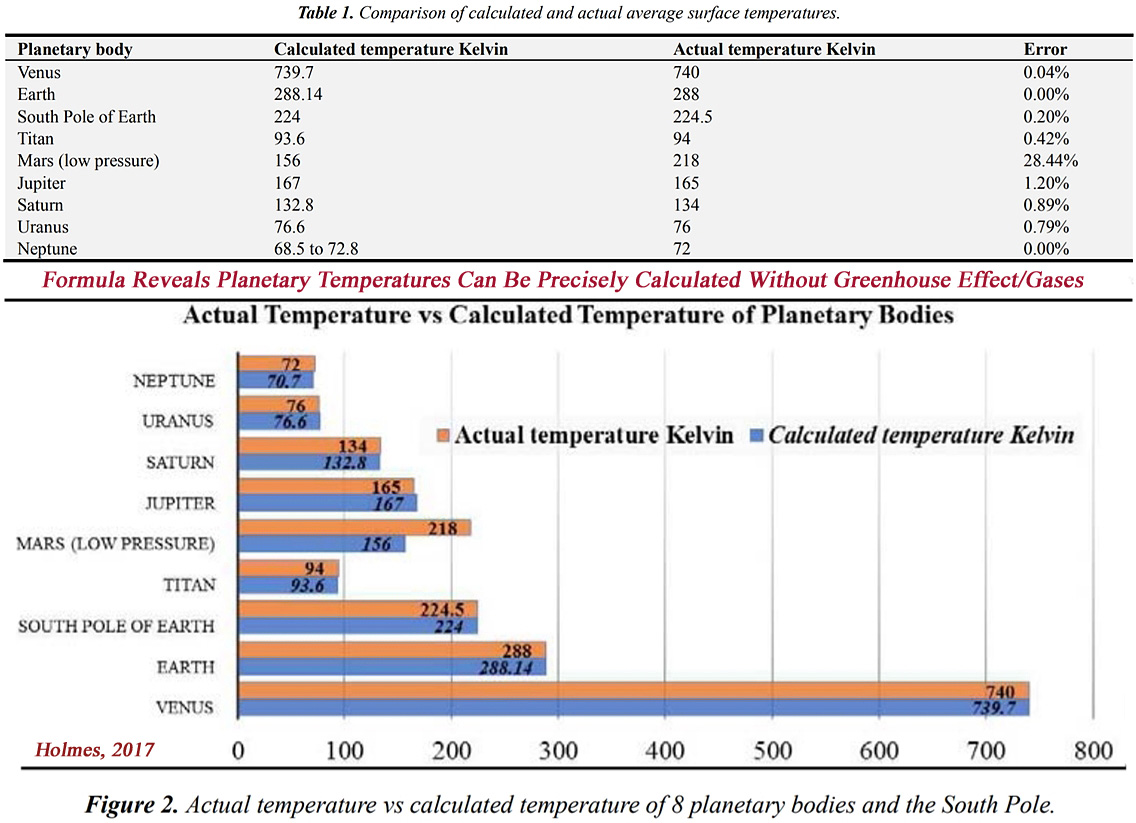 A facile illustration of the effects of atmospheric pressure on the surface temperatures of a planet like Earth can be found in the Grand Canyon, Southwestern U.S.  There, the North Rim is about 1,000 feet (305 meters) higher in elevation than the South Rim.  Interestingly, the North Rim is also about 9 degrees Fahrenheit colder than the South Rim due to the influence of atmospheric pressure/gravity.   The bottom of the canyon reaches temperatures 20-25 degrees warmer than the top.  The stark temperature difference is unrelated to the greenhouse gas concentrations for the two locations, nor is it connected to sunlight.   It’s the gravitational pressure that creates the heat divergence.

“Elevation and season of the year determine average temperatures at the the Grand Canyon. Elevations at top of the South Rim average around 7,000 feet. The North Rim averages about 8,000 feet. The higher the elevation, the cooler the temperature. At any given time, the North Rim will average 8-10 degrees Fahrenheit cooler versus the South Rim. … [T]he very bottom of the canyon can increase 20 to 25 degrees warmer than the top of the respective rims.”

Holmes points out that the implications of his precise calculations for planetary temperatures necessarily lead to the conclusion that there is no need to have a greenhouse effect or greenhouse gases to bridge a hypothetical “heat gap.”  Instead, he writes that “planetary bodies with thick atmospheres cannot be mainly determined by the ‘greenhouse effect’, but instead most likely by an effect from fluid dynamics, namely, adiabatic autocompression.”

This effectively rules out the possibility that CO2 is a predominant climate driver.

As he ostensibly understates in his conclusion, “This climate sensitivity is already so low that it would be impossible to detect or measure in the real atmosphere.”

It is here demonstrated that the information contained in just these three gas parameters alone is an extremely accurate predictor of atmospheric temperatures on planets with atmospheres >10kPa. This indicates that all information on the effective plus the residual near-surface atmospheric temperature on planetary bodies with thick atmospheres, is automatically ‘baked-in’ to the three mentioned gas parameters.

This formula proves itself here to be not only more accurate than any other method heretofore used, but is far simpler to calculate.  It requires no input from parameters previously thought to be essential; solar insolation, albedo, greenhouse gas content, ocean circulation and cloud cover among many others.

Given this, it is shown that no one gas has an anomalous effect on atmospheric temperatures that is significantly more than any other gas.

The Formula: An ‘Extremely Accurate Predictor’ Of Planetary Temperatures 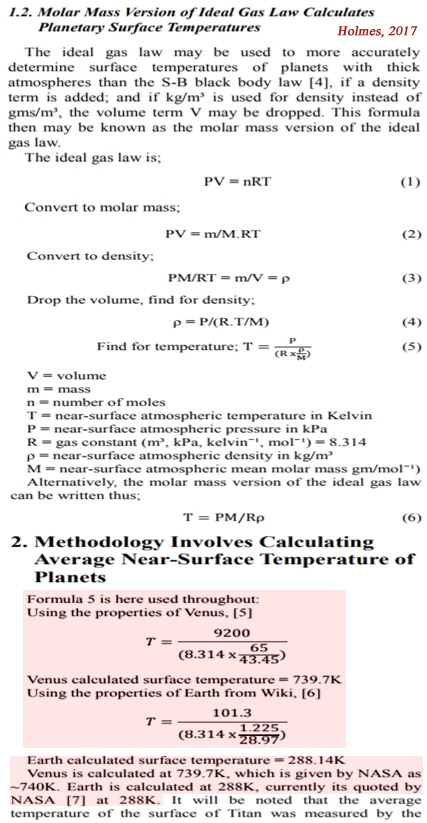 [T]he hypothesis being put forward here is that in the case of Earth, solar insolation provides the ‘first’ 255 Kelvin – in accordance with the black body law [11]. Then adiabatic auto-compression provides the ‘other’ 33 Kelvin, to arrive at the known and measured average global temperature of 288 Kelvin. The ‘other’ 33 Kelvin cannot be provided by the greenhouse effect, because if it was, the molar mass version of the ideal gas law could not then work to accurately calculate planetary temperatures, as it clearly does here.

It is apparent that this simple formula calculates the ‘surface’ temperatures of many planetary bodies in our Solar System accurately (Figure 2).

Specifically, those which have atmospheres thick enough to form a troposphere (i.e. possessing an atmospheric pressure of over 10kPa or 0.1bar). These are: Venus, Earth, Jupiter, Saturn, Titan, Uranus and Neptune. All calculated temperatures are within 1.2% of the NASA reported ‘surface’ temperature (except for Mars, which is excluded because it has a much lower atmospheric pressure than 10kPa).

This accuracy is achieved without using the S-B black body law, or the need to include terms for such parameters as TSI levels, albedo, clouds, greenhouse effect or, for that matter, adiabatic auto-compression. All that is required to be able to accurately calculate the average near-surface atmospheric temperature, is the relevant gas constant and the knowledge of three variable gas parameters.

Some reflection upon the simplicity and accuracy of these results will bring an unbiased person to the obvious implications of this work. These are that the residual (residual being the difference between S-B law results and actual) near-surface atmospheric temperatures on planetary bodies with thick atmospheres cannot be mainly determined by the ‘greenhouse effect’, but instead most likely by an effect from fluid dynamics, namely, adiabatic autocompression.

In particular, formula 5 (and 6) as presented here, totally rules out any possibility that a 33°C greenhouse effect of the type proposed by the IPCC in their reports [23] can exist in the real atmosphere. The reason is that the IPCC state in their reports that a 0.03% [300 ppm] increase in atmospheric CO2 (i.e. a doubling from pre-industrial levels) must result in a global temperature rise of ~3°C; (a range of 1.5°C to 4.5°C, which has hardly changed since 1990) [24]. This is the so-called ‘climate sensitivity’. Anything like this magnitude of warming caused by such a small change in gas levels is completely ruled out by the molar mass version of the ideal gas law.

The change would in fact be extremely small and difficult to estimate exactly, but would be of the order -0.03°C. That is, a hundred times smaller than the ‘likely’ climate sensitivity of 3°C cited in the IPCC’s reports, and also probably of the opposite sign [cooling]. Even that small number would likely be a maximum change, since if fossil fuels are burned to create the emitted CO2, then atmospheric O2 will also be consumed, reducing that gas in the atmosphere – and offsetting any temperature change generated by the extra CO2. This climate sensitivity is already so low that it would be impossible to detect or measure in the real atmosphere, even before any allowance is made for the consumption of atmospheric O2.