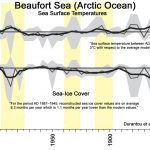 Share this… Facebook Twitter‘Strong Influence Of Solar Activity’ On 1850s-2014 Ocean Temperatures, ‘Small Contribution From CO2’ According to the United Nations Intergovernmental Panel on Climate Change (UN-IPCC) and computer modeling, the Sun’s role in modern-era climate change checks in at somewhere slightly above nothing. Image Source: IPCC AR5 (2013) And yet it is increasingly evident that more and more […]