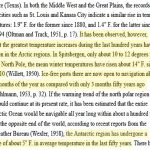 Share this… Facebook TwitterThe Narrative That Says Man-Made CO2 Drives Glacier Melt Continues To Implode “[T]he retreat of the glaciers after about 1925 became rapid.  It was almost entirely during the [pre-1950] twentieth century warming that the Alpine glaciers disappeared from the valley floors up into the mountains.  Similarly great retreats occurred in Scandinavia, Iceland, […]