The Narrative That Says Man-Made CO2

From the middle of the 20th century and through the 1970s, it was common for scientists to report a rapid warming of “nearly 1° C“ between about 1890 and 1940 (Agee, 1980), a warming accompanied by “catastrophic” and “violent” glacier retreat.

“CLIMATIC CHANGES OF THE PAST AND PRESENT”

Dr. Hans Ahlmann (1953) provided a graphical representation of a pronounced Northern Hemisphere-wide glacier retreat that largely commenced in the 1850s and was ongoing as of 1950. 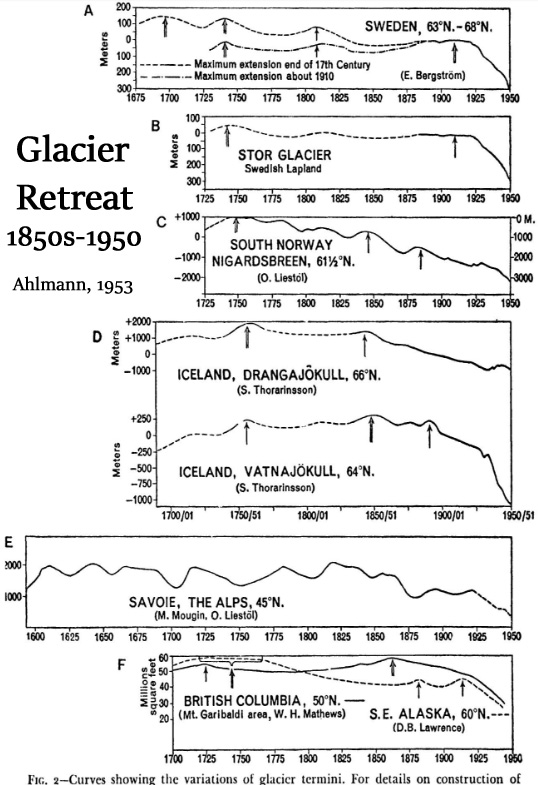 Changing The Temperatures To Fit The Models

The geologically-affirmed existence of an explosive 19th to early 20th century warming accompanied by a “violent” and “catastrophic” wide-scale glacier retreat is not convenient to the computer model-based narrative that says the rise in anthropogenic CO2 emissions is predominantly what causes dangerous warming and glacier retreat.

So the overseers of the global temperature data sets decided the explosive late 19th to mid-20th century warming and “violent” and “catastrophic” glacier retreat needed to be removed from the scientific record. 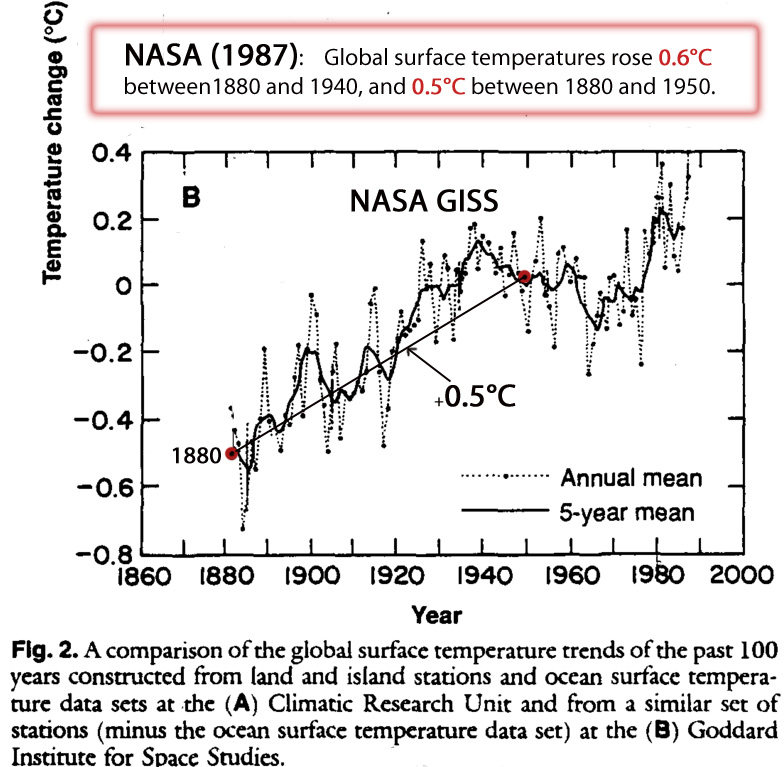 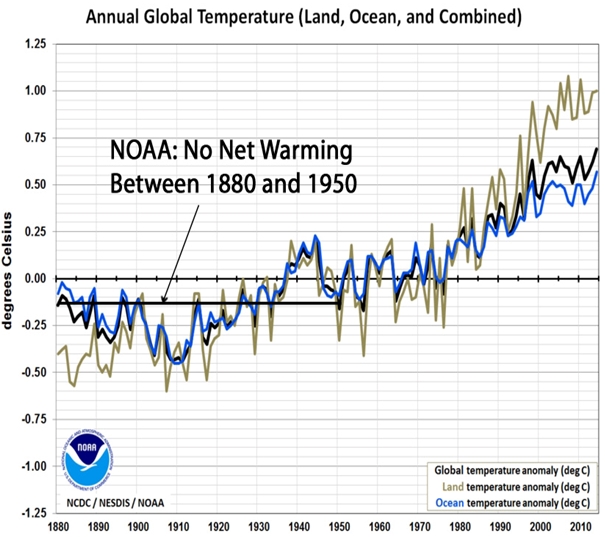 The scientific literature is teeming with geological evidence affirming the explosive warming and glacier retreat during the 1850 to 1950 period.  In other words, scientists are not providing support or confirmation for the narrative that says the post-1940s anthropogenic CO2 emissions increase has coincided with unusual, unprecedented, or alarming glacier retreat.

(1) Rates of glacier recession the second half of the 19th century similar to recent decades.

“The gradual increase in temperature during the second half of the 19th century resulted in significant glacier retreat, with rates of receding [in the second half of the 19th century] similar to those recorded during the last decades of the 20th century and in the early 21st century (Chueca et al., 2008). … The colder climate of the LIA was accompanied by severe droughts, floods, and cold/heat waves that showed significant spatio-temporal variation across the Iberian mountains. … The 20th century did not show unprecedented warmth over the last 800 years.”

“No role for industrial black carbon in forcing 19th century glacier retreat in the Alps … Starting around 1860 AD, many glaciers in the European Alps began to retreat from their maximum mid-19th century terminus positions, thereby visualizing the end of the Little Ice Age in Europe. Radiative forcing by increasing deposition of industrial black carbon to snow has been suggested as the main driver of the abrupt glacier retreats in the Alps. … Our study reveals that in 1875 AD, the time when European rBC [industrial black carbon] emission rates started to significantly increase, the majority of Alpine glaciers had already experienced more than 80% of their total 19th century length reduction. Industrial BC emissions can, therefore, not been considered as the primary forcing for the rapid deglaciation at the end of the Little Ice Age in the Alps.” 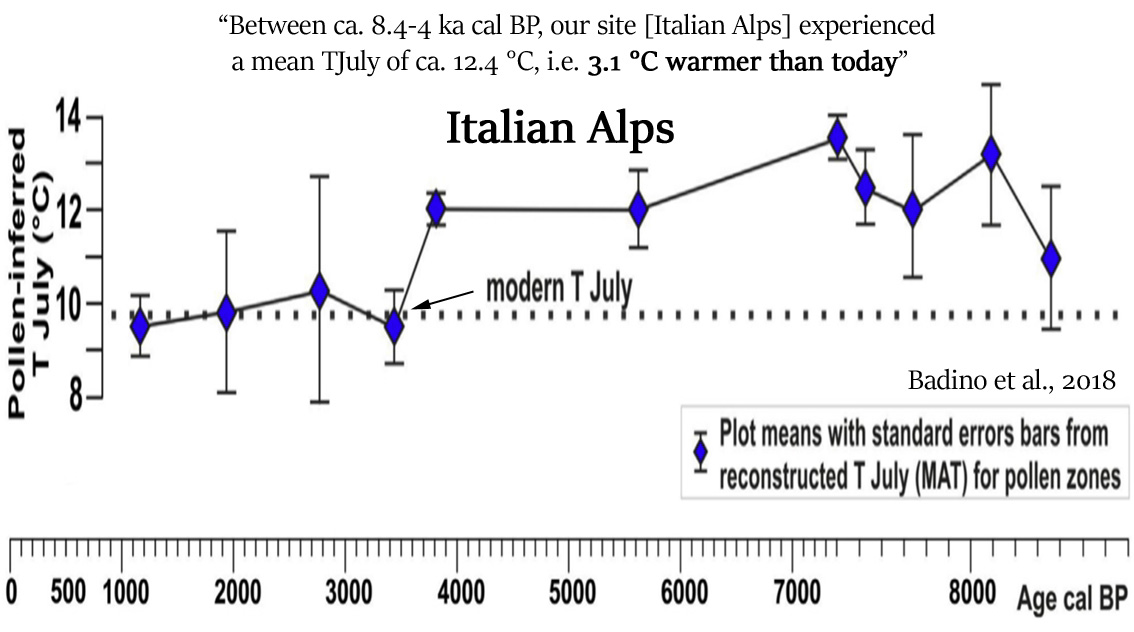 “The abrupt climatic transition of the early 20th century and the 25-year warm period 1925–1950 triggered the main retreat and volume loss of these glaciers since the end of the ‘Little Ice Age’. Meanwhile, cooling during the 1960s, 1970s and 1980s altered the trend, with advances of the glacier snouts. Stötter et al. (1999) indicate that the coldest period after the LIA was from the early 1960s to the mid-1970s, when temperatures fell to levels equivalent to the warmest recorded in the 19th century. This cooling is the reason given by Caseldine (1983, 1985a, 1985b, 1988) to explain the advance of the Gljúfurárjökull between the mid-1970s and the mid-1980s  … Studies of aerial photographs and satellite images show that the glacier snouts have retreated by more than 1300 m on average since the LIA maximum (considered to be AD 1898 in Gljúfurárjökull and AD 1868 in both Western and Eastern Tungnahryggsjökull), with an altitudinal rise of more than 100 m. The retreat accelerated rapidly (15.3 m yr−1) during the first half of the 20th century.  In the second half of the 20th century, the retreat decelerated considerably [4.7 m yr-1], reflected in the lowest values around 1985 (5.2 m yr−1) and a trend shift in 1994, with an advance observed in Gljúfurárjökull. … The trend in Western Tungnahryggsjökull during the first half of the 20th century was a more rapid retreat, showing the highest average rates of the whole period (19.5 m yr−1). … By 1946, this glacier had retreated almost 90% of the total recorded between the LIA maximum (1868) and 2005.” 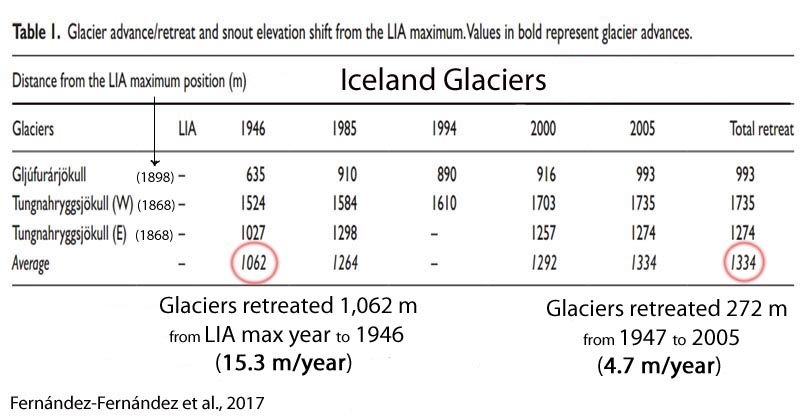 (4) Norway’s glaciers are currently more advanced than nearly all of the last 10,000 years, with pronounced recession occurring during the 1800s. 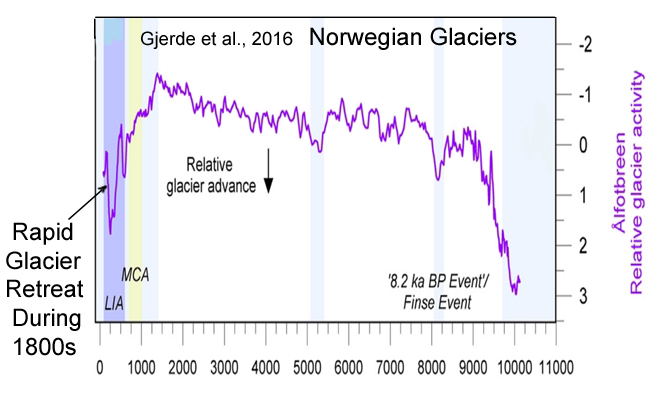 (5) On a global scale, glacier recession rates have dramatically decelerated since the 1920s to 1950s period.

A Human-Driven Glacier Retreat Is Not Supported By Evidence

Advocates of the position that humans exert a profound and dangerous influence on the Earth’s temperatures and glacier melt point to the rapid increase in human CO2 emissions (purple trend line) as the condemnable culprit. 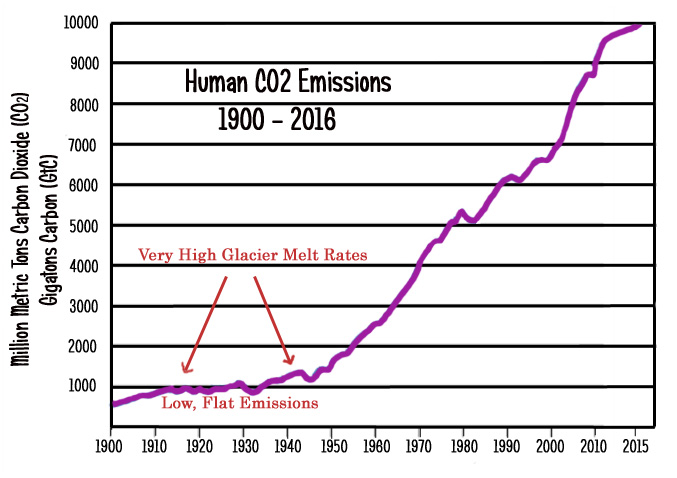 The trend in anthropogenic CO2 emissions was essentially flat and very low (averaging just 1 gigaton of carbon [GtC] per year) from about 1900 to 1945, when a significant portion of the modern glacier recession occurred.   Emissions rates were negligible during the high-melt-volume 19th century too.

Explosive growth in human emissions occurred after 1945, when a significant deceleration in glacier melt (and even decades of advancing glaciers) occurred.

This historical evidence would not appear to support the position that anthropogenic CO2 emissions drive both warming and glacier melt.