A new paper documents “remarkably different” land temperatures from one instrumental data set to another. In some regions there is as much as an 0.8°C conflict in recorded temperature anomalies for CRU, NASA, BEST, and NOAA. The relative temperature trend differences can reach 90% when comparing instrumental records. Consequently, the uncertainty in instrumental temperature trends — “0.097–0.305°C per decade for recent decades (i.e., 1981–2017)” —  is as large or larger than the alleged overall warming trend itself for this period.

In a just-published audit of the IPCC-preferred HadCRUT temperature data set, Dr. John McClean identified 70 problems that seriously compromise the reliability and accuracy of this IPCC-preferred instrumental record dating back to 1850.

Joanne Nova provides a summary of the main points from the paper, McLean’s Ph.D thesis.

Are Any Of The Temperature Data Sets Reliable?

A new paper published in the Journal of Geophysical Research reveals that the recorded land temperature data from the four most commonly-referenced instrumental data sets — CRU, NASA, BEST, and NOAA — are “remarkably different” from one another.

In fact, the authors find that “for some areas, different data sets produce conflicting results of whether warming exists” due especially to variations in the use of “infilling techniques” — adding artificial temperatures to areas where there are no real-world measurements.

One data set trend can be “nearly 90%” different than another data set trend, which ratchets up the uncertainty to levels that undermine confidence in the overall reliability of the instrumental record.

Excerpts from the paper’s abstract and discussion/conclusion are provided below. 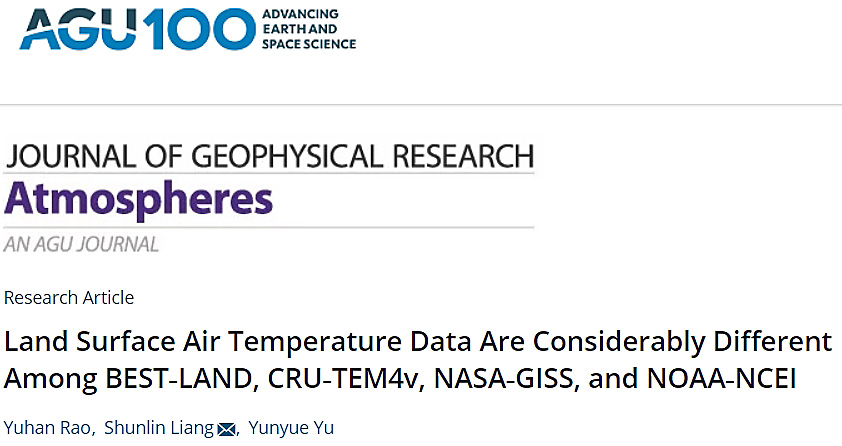 “These differences cause notable differences for the trend calculation at regional scales. At the local scale, four data sets show significant variations over South America, Africa, Maritime Continent, central Australia, and Antarctica, which leads to remarkable differences in the local trend analysis. For some areas, different data sets produce conflicting results of whether warming exists.”

“Our analysis shows that the differences across scales are associated with the availability of stations and the use of infilling techniques. Our results suggest that conventional LSAT data sets using only station observations have large uncertainties across scales, especially over station‐sparse areas.”

“The relative difference of trends estimated from different data sets can reach nearly 90% for different regions and time periods. CRU-TEM4v generally appears to have the largest grid box scale differences, while NASA-GISS has the smallest differences compared to BEST-LAND.”

“In developing future LSAT data sets, the data uncertainty caused by limited and unevenly distributed station observations must be reduced.” 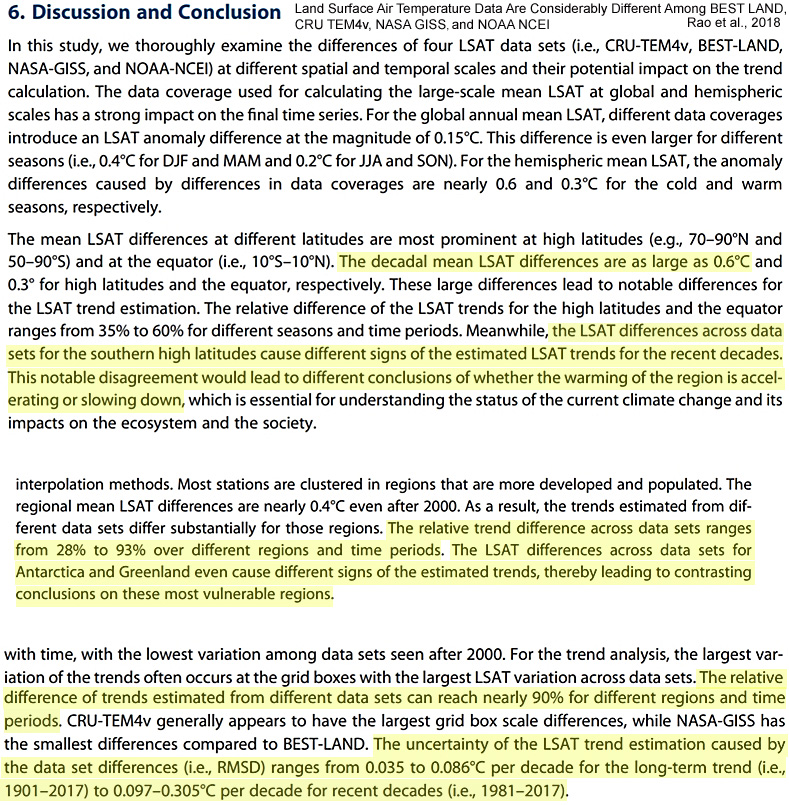