Danish Professor Henrik Svensmark is a leading physicist of cosmic radiation. At the end of last year he made a presentation at the 12th International Climate Conference in Munich, where he demonstrated that the climate is indeed modulated in large part by cloud cover, which in turn is modulated by solar activity in combination with cosmic rays.

His theory is that cosmic rays, which are extremely fast-flying particles – which originate from dying supernovae – travel through the cosmos, strike the Earth’s atmosphere and have a major impact on cloud cover and thus climate on the Earth’s surface.

This, Svensmark says, has been confirmed in numerous laboratory experiments.

In his presentation, the renowned Danish scientist showed how solar activity modulates the cosmic rays striking the atmosphere, and thus the climate-impacting cloud cover. Dr. Svensmark shows that there are powerful correlations worldwide between solar activity and climatic cycles, and so the sun is clearly playing a role in combination with the cosmic cloud-seeding rays. Hundreds of studies confirm this.

Observations and proxy data show that “when you have high cosmic rays, you have a cold climate” because of greater cloud cover. According Svensmark, the net effect of clouds is to cool the Earth by up to 30 W/m2.

Clouds are extremely important for the Earth’s energy budget. The net effect is about 20 to 30 watts per square meter.”

That figure is great in terms of impact on climate change, and it is grossly neglected by CO2-fixated climate scientists.

His research shows there is clear link between low cloud cover formation and galactic cosmic rays: 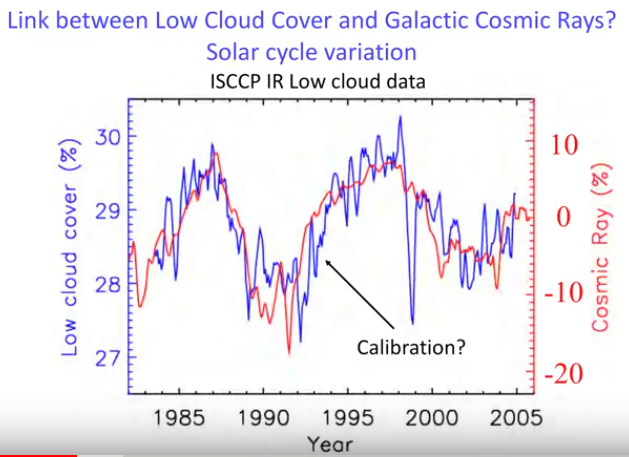 In his presentation (see video) he explains the mechanism of how the cosmic rays seed low level clouds, which act to cool the climate. In periods of intense solar activity, the sun’s magnetic field engulfs and shields the Earth’s atmosphere from the cloud-seeding cosmic rays, thus less low level clouds are formed and the Earth warms.

Vice versa, i.e. during periods of low solar activity, the sun’s magnetic field is weaker, and so more cosmic rays are able to penetrate into the atmosphere and seed clouds. The resulting clouds act to cool the planet.

Svensmark’s experiments confirm that solar cycles impact energy changes in the oceans by an order of 1.5 W/m2 over an 11-year cycle and that his findings are consistent with climate changes over the Holocene and even geological times going back more than 100 million years.

Over geological history, especially when the Earth traveled through one of the spiral arms of the Milky Way, cosmic rays striking the atmosphere were very intense and thus led to extremely cold conditions known as the Snowball Earth episodes. Other scientists insist the episodes were caused by intense volcanic eruptions. 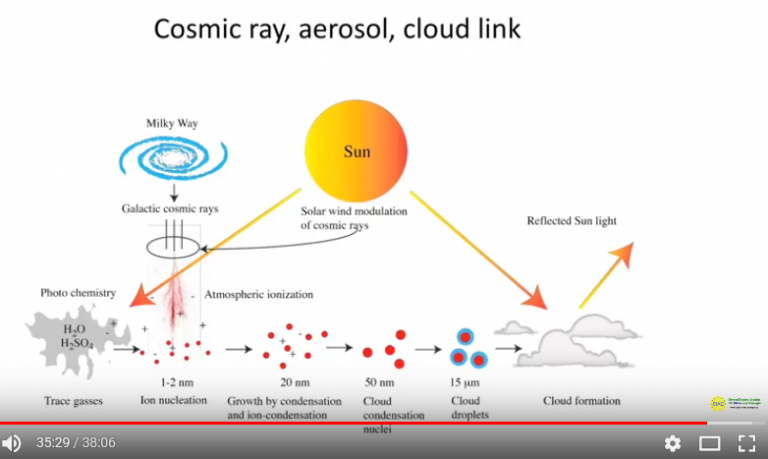 In the end, changes in solar activity lead to significant changes in the earth’s energy budget, and thus climate change, Svensmark believes. This explains why the Earth has seen “coolings and warmings of around 2°C repeatedly over the past 10,000 years.”

The Sun became unusually active during the 20th Century and as a result part of the ‘global warming’ observed.”