“It is not possible to reliably support the view of the presence of
global warming in the sense of an enhanced greenhouse effect
due to human activities.” — Drs. Varotsos and Efstathiou, 2019 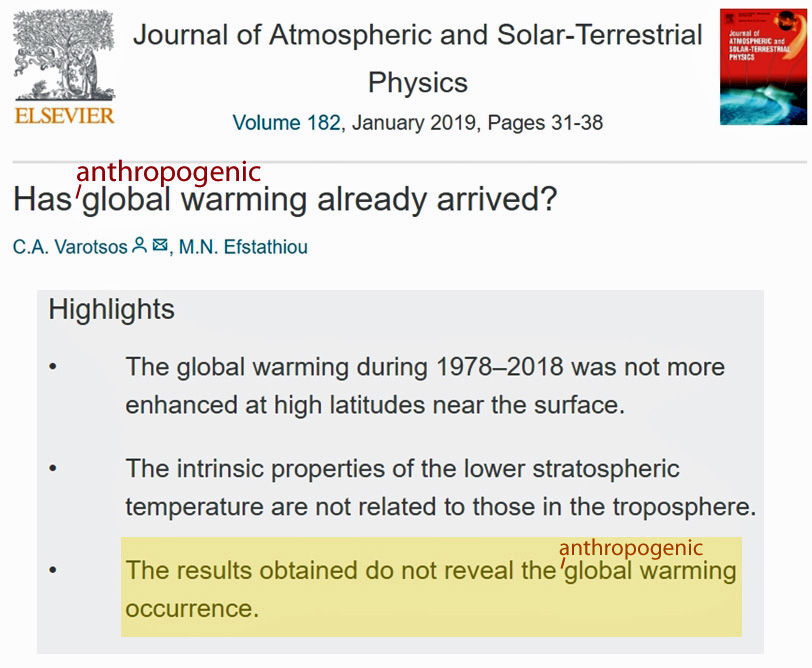 In a step-by-step dissection of the anthropogenic global warming (AGW) hypothesis, or “greenhouse hypothesis of global warming”, two prominent Greek atmospheric physicists  – Dr. Carlos Varotsos and Dr. Maria Efstathiou – expose the withering contradictions between (a) what is hypothesized to occur atmospherically according to AGW models and (b) what was actually observed from satellite measurements during 1978 to 2018.

According to AGW models, there was supposed to be “a consistent warming with gradual increase from low to high latitudes in both hemispheres” in response to the dramatic increase in greenhouse gases over the last 40 years.

According to temperature change observations in the satellite era (December, 1978, to present), this pattern did not occur.

Satellite observations do not indicate that such a stratospheric-tropospheric relationship existed during this period.

The fundamental discrepancies between AGW models and real-world observations led these climate scientists to conclude that (a) “climate models are not able to simulate real climate”, and (b) the view that increases in greenhouse gases from human activities are what caused the global warming over the last 40 years cannot be reliably supported by observed evidence.

• “The enhancement of the atmospheric greenhouse effect due to the increase in the atmospheric greenhouse gases is often considered as responsible for global warming (known as greenhouse hypothesis of global warming). In this context, the temperature field of global troposphere and lower stratosphere over the period 12/1978–07/2018 is explored using the recent Version 6 of the UAH MSU/AMSU global satellite temperature dataset. Our analysis did not show a consistent warming with gradual increase from low to high latitudes in both hemispheres, as it should be from the global warming theory.”

• “In summary, the tropospheric temperature has not increased over the last four decades, in both hemispheres, in a way that is more amplified at high latitudes near the surface. In addition, the lower stratospheric temperature did not decline as a function of latitude. Finally, the intrinsic properties of the tropospheric temperature are different from those of the lower stratosphere. Based on these results and bearing in mind that the climate system is complicated and complex with the existing uncertainties in the climate predictions, it is not possible to reliably support the view of the presence of global warming in the sense of an enhanced greenhouse effect due to human activities.”

• “Over the last decades, the rise in surface air temperature in regions of our planet has led to a debate in the scientific community about the causes and impacts of this temperature rise, especially if it comes from anthropogenic activities or is of natural origin.”

• “[R]eal climate change results from the non-linear interactions between numerous components of the climatic system. In these should also be taken into consideration and possible contributions by external forcings e.g., cosmic factors, such as solar activity. Despite the projected exponential growth in computer power, these processes will not be adequately resolved in numerical climate models in the near future (Franzke et al., 2015). Stochastic methods for numerical climate prediction may allow for an adequate representation of uncertainties, the reduction of systematic biases and improved representation of long-term climate variability (e.g., Droegemeier, 2009). Some analyses show that current models are not able to simulate real climate. The main reason is that climate is a high-dimensional forced and dissipative complex system with chaotic dynamics that displays different physical and chemical properties of its various components and coupling mechanisms.” 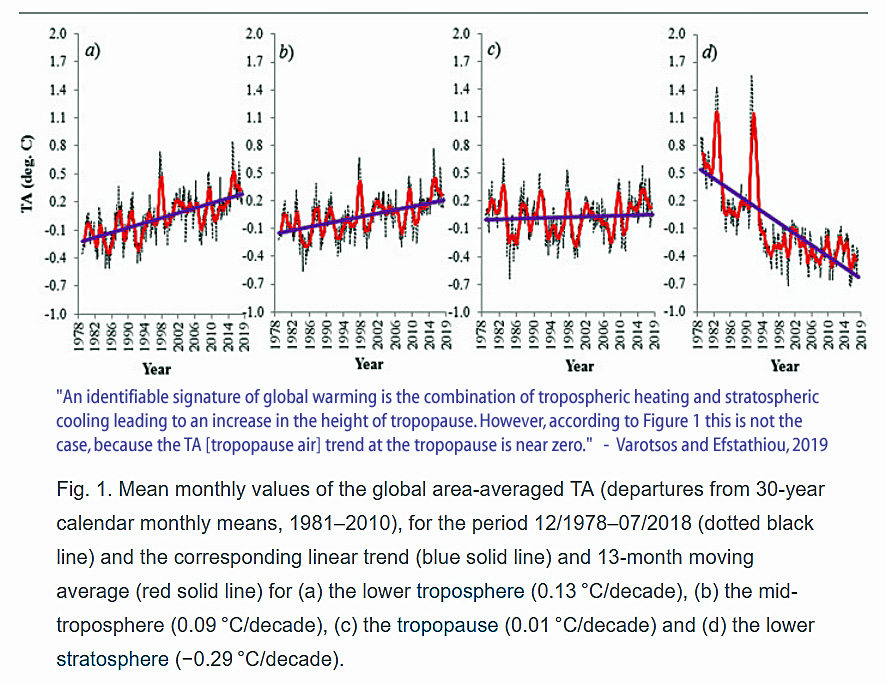 • “An identifiable signature of [anthropogenic] global warming is the combination of tropospheric heating and stratospheric cooling leading to an increase in the height of tropopause. However, according to Figure 1 this is not the case, because the TA [tropopause air] trend at the tropopause is near zero.”

• “According to Hoskins (1991) the expectation for global warming is to be more enhanced at high latitudes near the surface. That is, in the case of global warming occurrence, warming would have been stronger at the poles and would gradually decrease by approaching the equator. However, the pattern depicted in Table 1 does not comply with the gradual increase of the warming with latitude as predicted by the global warming theory.”

77 responses to “Atmospheric Physicists: A Human Signature Hasn’t Shown Up In 40 Years Of Temperature Change Observations”