How Changes on the Sun Influences Rain

A balanced level of precipitation provides the basis for a wide range of economic and social activities in Europe. Particularly agriculture, drinking water supply and inland waterway transport are directly affected. However, the amount of rain fluctuates strongly from year to year. While it may pour torrentially in one year, rain may remain absent for weeks in other year. The population is used to this variability and usually knows how to deal with it.

But what is behind the strong changes? A system, or pure atmospheric noise?

The chance discovery by an agricultural scientist from Münster, Germany, now suggests that in certain months that rain over Germany and other parts of Europe follows a pattern that up to now has remained undetected. As part of agricultural consultation, Ludger Laurenz analyzed decades of rainfall records of the weather station in Münster and noticed a constant up and down that followed an 11-year rhythm – especially in February. 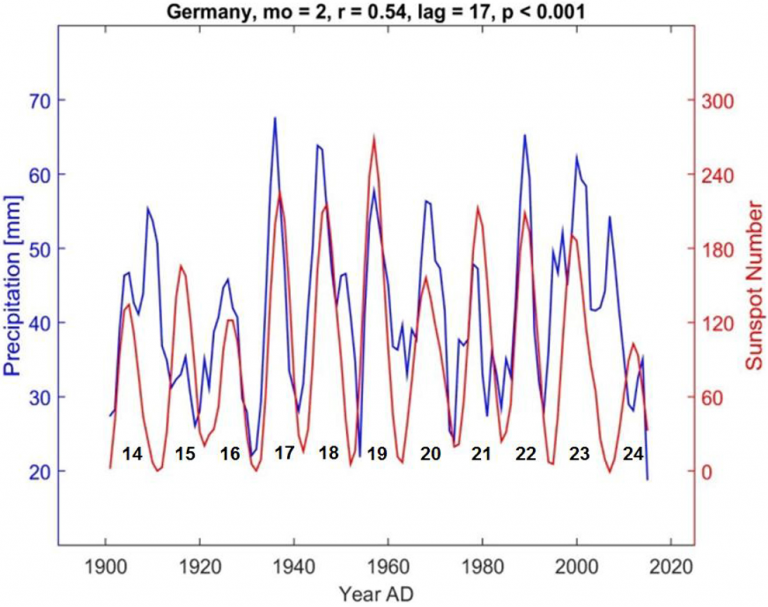 After detailed examination it was clear that this rhythm correlated closely with the activity of the sun: the well-documented 11-year sunspot cycle.

Laurenz next teamed up with two colleagues to examine the extent to which the observed pattern from Münster is reproducible in other parts of Germany and Europe, and whether the phenomenon also exists for the other months of the year. Horst-Joachim Lüdecke from the HTW University of Applied Sciences in Saarland gathered the precipitation data collected in Europe since the beginning of the 20th century. The physicist emeritus then developed a computer algorithm to determine the similarity of changes in rainfall and solar activity. All 39 European countries and every one of the 12 months of the year were quantified over a total of 115 years using mathematical correlations. 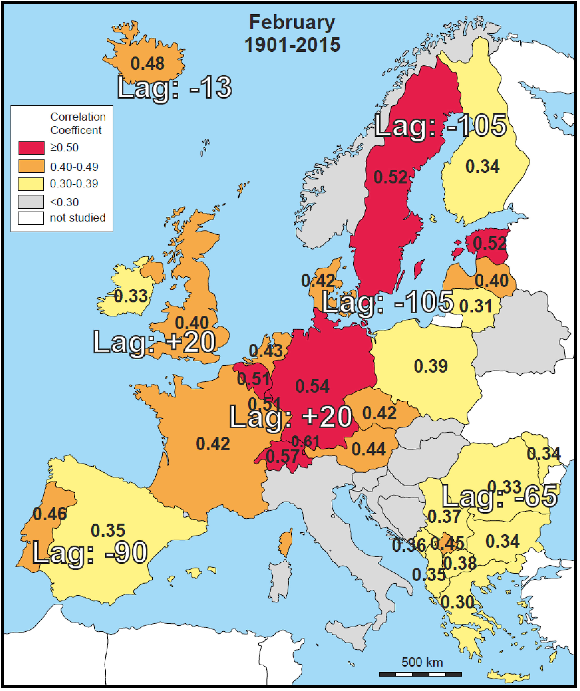 Fig. 3. Map showing the 1901–2015 most positive correlation coefficients for February precipitation and sunspots on a country-by-country basis. Pearson r values from Table 1. All maps: Lags are simplified and generally fall within ±10 months of the statistically calculated value (Table S1). Source: Science Direct.com.

In order to include possible delay effects, the data series of rain and sunspots were systematically checked for shifts. For this purpose, the time series were gradually shifted in time against each other like combs and the respective change of the correlation measure was noted. The multidimensional data obtained in this way were evaluated for systematic trends by geoscientist Sebastian Lüning and visualized cartographically. Lüning is associated with the Swiss Institute of Hydrography, Geoecology and Climate Sciences (IFHGK) and is specialized in the research of solar climate effects.

The mapped out results show that the link between February precipitation and solar activity originally discovered in Münster is valid for large parts of Central and Northern Europe and has very high statistical significance there. Towards southern Europe, however, the correlation weakens significantly.

The statistical investigation was also able to demonstrate systematic phase shifts across the continent. In Germany and neighboring countries, February precipitation was particularly low when the sun was very strong four years earlier. The delay seems to be due to the slow deep circulation of the Atlantic, as earlier work suggests. On the basis of the statistically-empirically determined correlation, February 2018 in Germany with particularly low precipitation can now also be explained, which followed a particularly high intensity peak of solar activity at the beginning of 2014.

Solar signal found in other months

Similar relationships between rainfall and solar activity have been observed in a weakened way in some other months, especially in April, June and July, which account for a large part of the vegetation period in Central Europe. The result was a complex picture of the interplay of sun and rain in Europe, which showed clear trends over 1000 km and varied strongly from month to month.

The study thus confirms the concept of a solar participation in the European hydroclimatic development, which had already been indicated by a whole series of local case studies of other authors. However, the exact mechanism by which the solar signal influences precipitation is still largely unclear and requires further research.

The solar precipitation effect, which has now been mapped out across Europe for the first time, opens up new possibilities for improved medium-term precipitation forecasts. Agriculture in particular, but also for defense against extreme weather damage in connection with heavy rainfall and droughts, could benefit from this.

The next step in refining the forecasting methodology is a more precise quantification of the effects of Atlantic Ocean cycles, which also play an important role in rainfall, especially in Western Europe.

The pdf version can be downloaded free of charge at the following link until early March: https://authors.elsevier.com/a/1YXWZ4sIlkiVhv