German wind park protest group MenschNatur posted here explaining how even adding more wind and solar capacity does not make Germany’s energy supply any more reliable, but in fact may even make it less so.

Thus the wind energy protest group MenschNatur has taken a closer look at the increase in installed nominal capacity over the past years and compared it to what actually gets fed into the grid.

How increases in wind generator capacity affects the feed-in power is described in the following diagram. MenschNatur plotted the installed capacity of all German onshore wind turbines from 2014 to 2018, along with what actually got fed in. 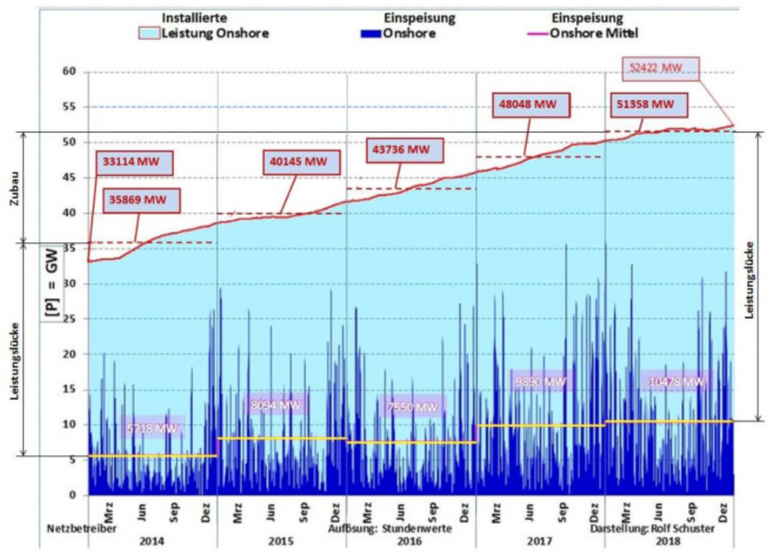 Figure 1: Expansion of rated installed wind power capacity and the power that actually got fed into the grid in Germany. Chart: MenschNatur, by Rolf Schuster.

The dark blue, jagged field is the wind power that got fed-in. For better comparability, they averaged the added wind generator capacity data and the average feed-in values for each year. As you can see, the increased added wind generator capacity (red dotted lines) increased at a more or less steady rate each year. However, the average wind power that got fed in (yellow line) does not keep pace with the rate of added capacity.

We can can conclude: Despite the addition of state-of-the-art wind turbines, the feed-in capacity can still fall. The output depends heavily on the year-to-year weather conditions.

In fact in real time, the power that gets fed-in by wind and sun in Germany can come close to zero in times of no wind and sun, as the following chart below shows for January 2019: 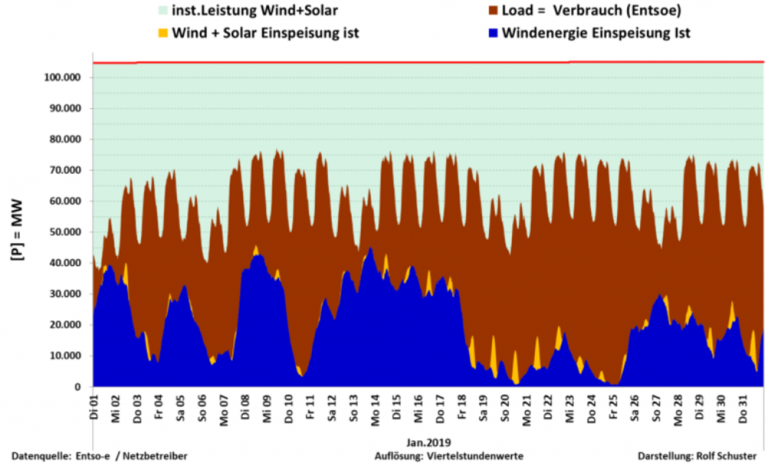 The upper horizontal line represents total installed sun and wind capacity = 105,000 MW. Yet, for example on January 25, There was a night where almost nothing got fed in by wind and sun. Not once was the 105,000 MW of installed capacity able to even come close to supplying Germany’s peak power demands of 75,000 MW.

Another stark example is September, 2017: 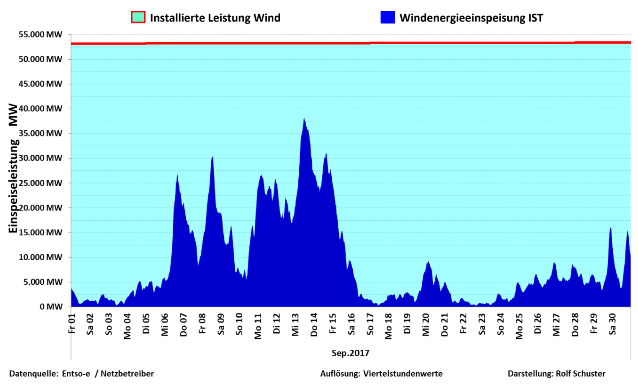 Dark blue field is the power that got fed into the grid. Source: www.vernunftkraft.de/, Chart by Rolf Schuster

In September, 2017, the 53,000 MW of installed wind power capacity was able to deliver almost nothing for days.

MenschNatur adds that even tripling Germany’s current installed capacity to over 300,00 megawatts would still not be able to fill in the gaps, and often would produce huge surpluses of power that would totally throw the energy markets out of whack.