Alarmists say that sea levels are rising rapidly, and unless we act now to take over the climate using the secret man-made CO2 reduction method, soon New York and even Cologne, Germany, will end up in water. At least that’s the alarmist scenario that the Truth Media like to tell us about.

However, a number of studies and tide gauge data tell us a very different story. Hat-tip: reader Mary Brown.

The latest study titled: Holocene sea-level change and evolution of a mixed coral reef and mangrove system at Iriomote Island, southwest Japan, by Yamano et al tells us that sea levels were more than 1 meter higher 5100 to 3600 years ago than they are today they, or 0.4 meters when corrected for tectonics. 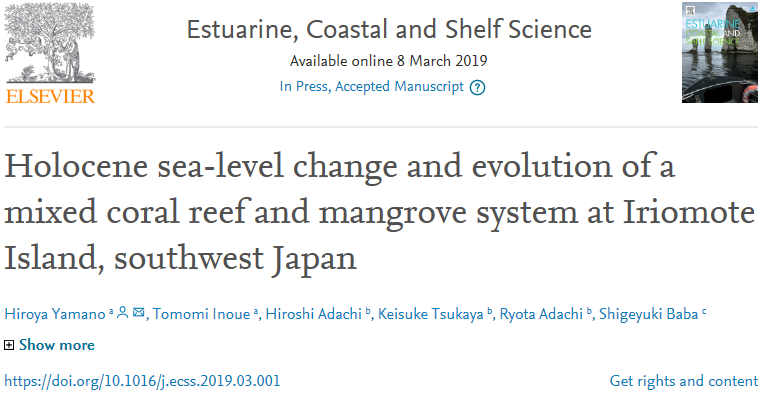 Exposed fossil microatolls and core samples from a coral reef and a mangrove forest at the Yutsun River mouth, Iriomote Island, southwest Japan, reveal the internal structure and temporal changes in the sedimentary processes of a mixed reef–mangrove system. Evidence from the core samples and fossil microatolls suggests sea level reached its present position before 5100 cal yr B.P., and a relative sea-level highstand of 1.1–1.2 m above the present sea level occurred from 5100 to 3600 cal yr B.P. This was followed by a gradual fall in relative sea level. The tectonically corrected sea-level curve indicates a stable sea level after 5100 cal yr BP., with a sea-level highstand of up to 0.4 m between 5100 and 3600 cal yr B.P.

A nearshore reef dominated by massive Porites and arborescent Acropora initially developed at 6500–3900 cal yr B.P. Reef development was potentially terminated by relative sea-level fall and sediment discharge from the Yutsun River that affected the backreef environment. An offshore coral reef reached present-day sea level by 1000 cal yr B.P., forming a wave break that enabled the foundation of mangrove forest on the fringing reef after ∼1000 cal yr B.P. The reef development was significantly delayed compared with other coral reefs in the region with similar medium-to high-energy conditions, but it provided a calm environment in the backreef area that allowed the development of mangroves. These features demonstrate the chronology and causal relationship between coral reef and mangrove development under the influence of Holocene sea-level change and river discharge.”

The peer-reviewed study is yet more cold water on the heated alarmist claims of a rapidly accelerating sea level rise.

Tide gauges are also showing a much slower sea level rise. Just recently the NOAA here announced that had adjusted its tide gauge data for 2018 and now says the average global sea level rise rate is only 1.7-1.8 mm/yr, as opposed to satellite data which show a rise of over 3 mm per year.

Naturally, the tide gauge data are more crucial because they measure sea level rise at the coast where people actually live.

15 responses to “New Study Shows Sea Level Near In Western Pacific Was 0.4 Meters Higher 3600 Years Ago Than Today”