The Jena-Germany based climate science and renewable energies- critical European Institute For Climate and Energy (EIKE) has sent a cease and desist letter to Wikimedia headquarters in San Francisco demanding that the platform remove all the “false content” in the German language entry about the organization. 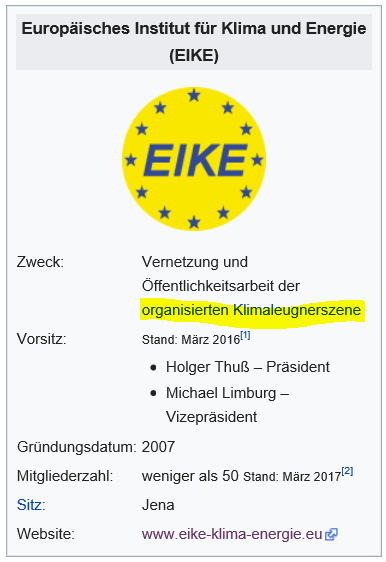 EIKE is a non-profit association with the statutory purpose of promoting science and research in the field of climate and energy. According to EIKE, “We pursue our statutory association purpose independently of political parties, religious communities, other associations or organizations.”

EIKE claims the German Wikipedia entry about its activities and members has very little to do with the reality and that the content was in large part written to mislead readers rather than inform them and to slander the institute. “The content of the Wikipedia entry is filled with falsehoods which results in casting EIKE in an extremely negative light,” the Jena-Germany based scientific think tank commented by e-mail.

“Almost every single claim made by the Wikipedia entry about EIKE is either maliciously misleading, grossly distorted or just outright false, wrote EIKE Vice President, Michael Limburg in an e-mail.  “The Wikipedia entry was designed to produce a contemptuous image of the organization with the aim discrediting it.” The list of deletions demanded by EIKE is 7-pages long!

In one example, the Wikipedia entry claims that the EIKE “is described by independent voices from science and media as the center of the politically active and organized scene of climate deniers in Germany” (see image above) and that “its goal is to promote systematic attacks on climate science’s findings.”

“This is absolutely false and malicious,” EIKE responded by e-mail when asked for comment.

In the long grievance to Wikipedia, the attorney representing EIKE wrote that the claim made by the Internet platform’s authors was “made up”, “untrue and unlawful”, adding: “My client does not deny climate change, and their goal is not to systematically attack the findings of climate science.”

Among the many other alleged false statements made at the Wikipedia site was also that EIKE “pretends to be scientific, deliberately disseminates misinformation and tries to influence parties.” In the cease and desist letter, the attorney representing EIKE called that statement “false” and “unlawful”, adding that EIKE is independent of all political parties and that EIKE “conducts its own research on climate and energy and publishes it in scientific journals and at international scientific congresses.”

Over the years, EIKE has organized around a dozen international climate and energy conferences, which often feature many renowned, yet dissenting scientists, such as astrophysicists Prof. Nir Shaviv of the University of Jerusalem and Prof. Henrik Svensmark of the Danish National Space Institute (DTU Space) in Copenhagen. Other speakers have included leading oceanographer Prof. Nils-Axel Mörner.

EIKE also notes that the conferences are open to any scientists, and that it is not solely a place where “climate deniers” meet.

Under the Wikipedia entry subheading “Grundsätze des Vereins” (principles of the association) it states that EIKE is “an organization of climate deniers” – a claim that is not only false but also “unlawful”, the EIKE attorney wrote. Climate alarmists routinely use the “denier” term in order to slander and equate global warming skeptics to Holocaust deniers.

In the Wikipedia entry about EIKE, it is repeatedly suggested EIKE is funded by the oil and coal industry and the Koch Brothers through its links to CFACT, Heartland Institute, and other organizations.

The attorney representing EIKE underscored: “EIKE a scientific institute and think-tank, organized as a non-profit organization, with the sole purpose of presenting facts concerning climate and energy without any ideology. Yet, it is suggested that my client financially represents the interests of the oil and coal industry, which is demonstrably not true.”

In total, EIKE sent a list 7 pages long of false statements and misleading claims to Wikipedia demanding that they be removed.

EIKE has been working for sometime to get the needed corrections implemented at the Wikipedia site, but without success. Officials at EIKE say the falsehoods and deceptive claims platformed by Wikipedia risks inflicting great damage to their reputation and the overall perception among the unknowing public.

EIKE officials recently sent a cease and desist letter to Wikimedia head offices in San Francisco. But according to EIKE, they received a response from Wikimedia that said there were no German speakers there, and so they couldn’t help.

Wikipedia is a worldwide platform whose content is regularly posted in almost every major language worldwide. Over the years it has been sharply accused of poor quality control and political bias, especially concerning hot-button political issues such as climate science.