In the coral habitats of the Western Indian Ocean, SSTs have cooled by -0.8°C since the 1980s (Watanabe et al., 2019). It has long been established that exposure to extremely low temperatures induce coral bleaching and high mortality rates just as much as warm SSTs do. Further, colder periods – which are associated with falling sea level, habitat diminution, and increased exposure to UV radiation – have been documented to coincide with dramatic reef “switch-off” phases (Yan et al., 2019, Humblet et al., 2019).

I. Non-warming SSTs in coral environments during recent decades

In many of the regions where reef-building corals are abundant, there has been no significant increase in sea surface temperatures (SSTs) since the 1980s. In fact, large sections of the Indo-Pacific have been cooling. 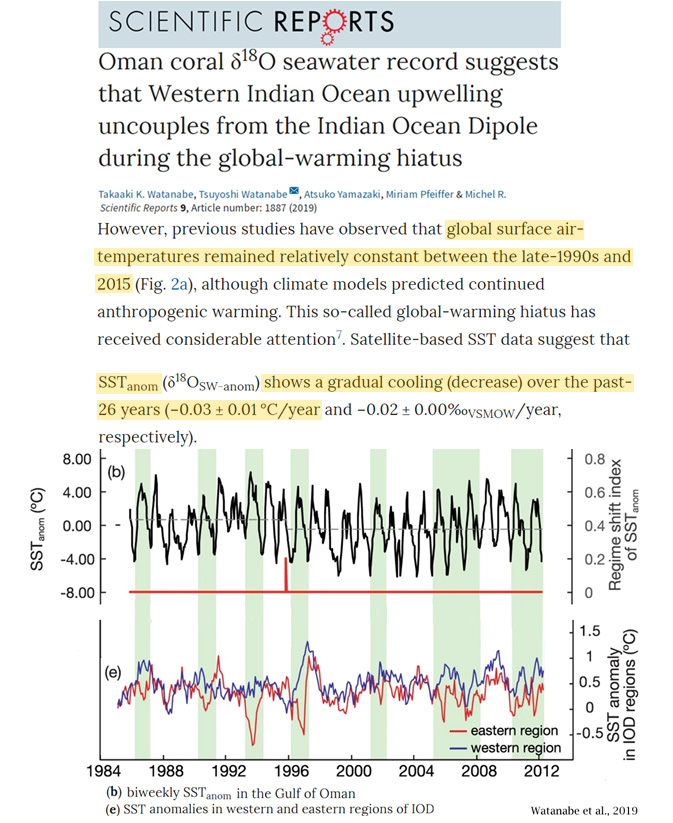 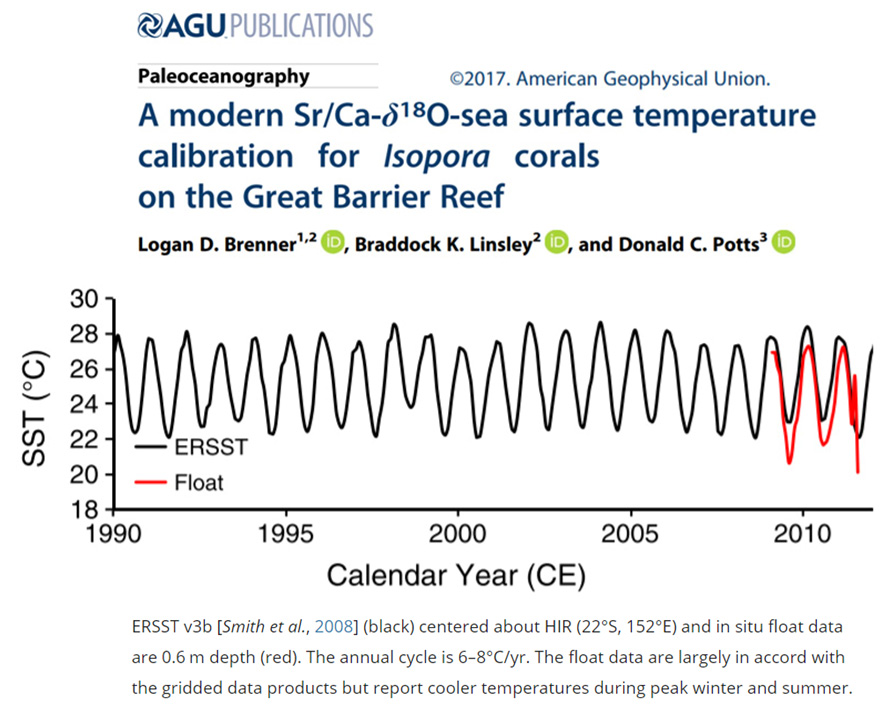 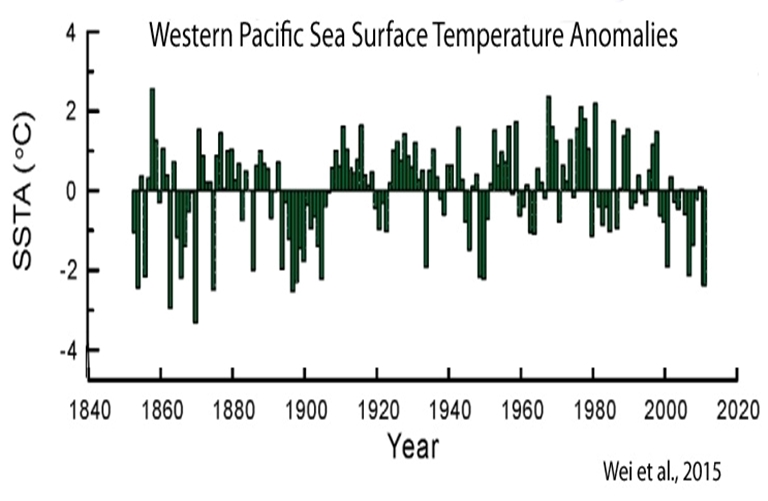 It is commonly thought that coral bleaching events are directly tied to anomalously high SSTs during the warming phase of El Niño events.

However, recent research indicates that bleaching events were more common during the 1750s and 1890s than in recent decades (Kamenose and Hennige, 2018). 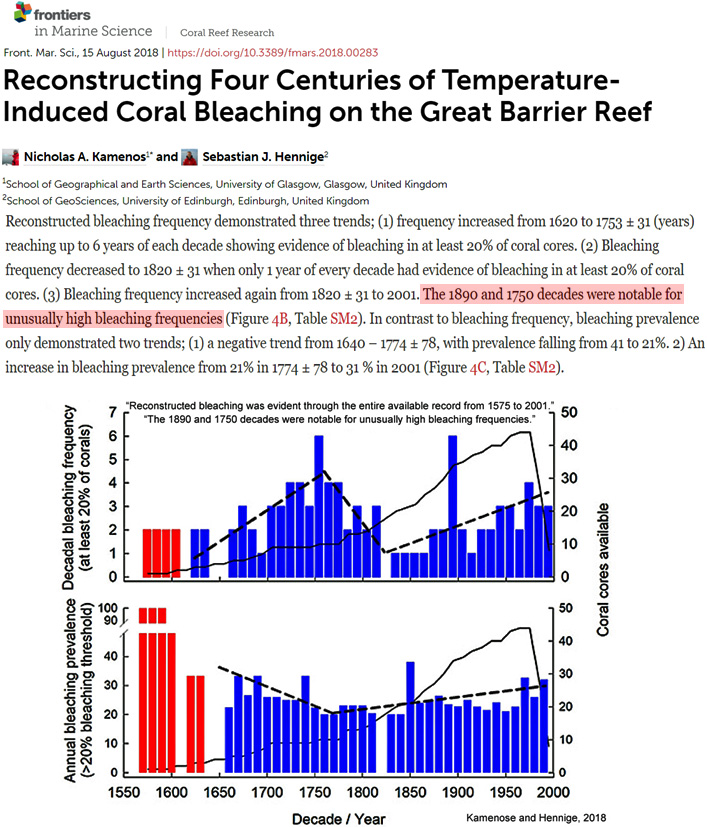 The cooler Little Ice Age SSTs may have been concomitant with decades of mass coral bleaching because bleaching can occur in anomalously cold water conditions too (Saxby et al., 2003, Hoegh-Guldberg et al., 2005).

Corals experience bleaching and extremely high death rates from exposure to SSTs that dip below 14°C. For example, a 2003 (August) cold-water event (13.3°C, 9°C wet bulb) wiped out all but 12% of corals living near Heron Island (Hoegh-Guldberg et al., 2005). 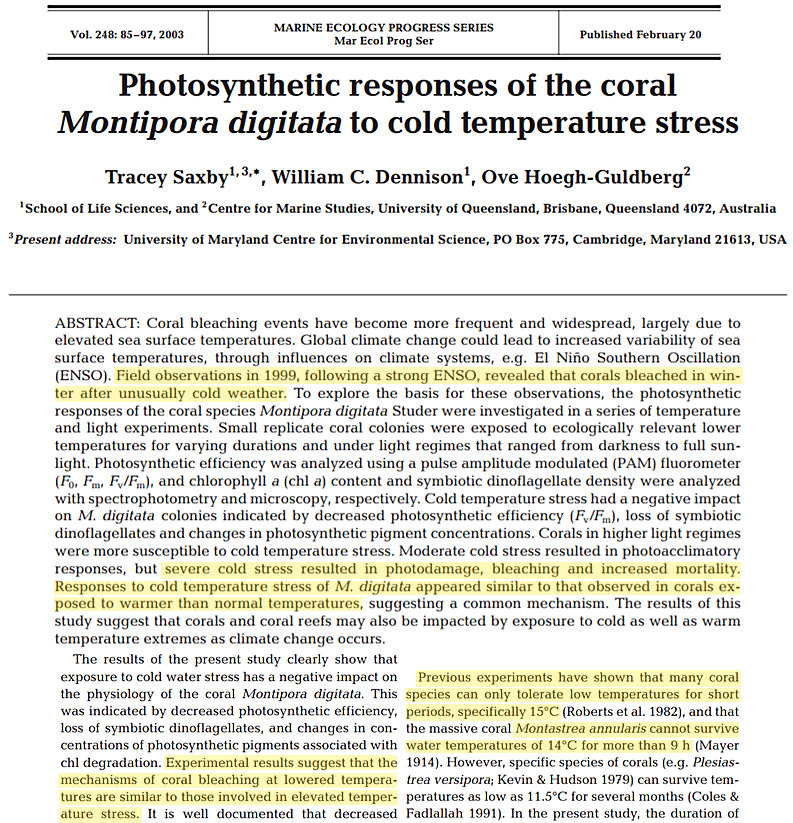 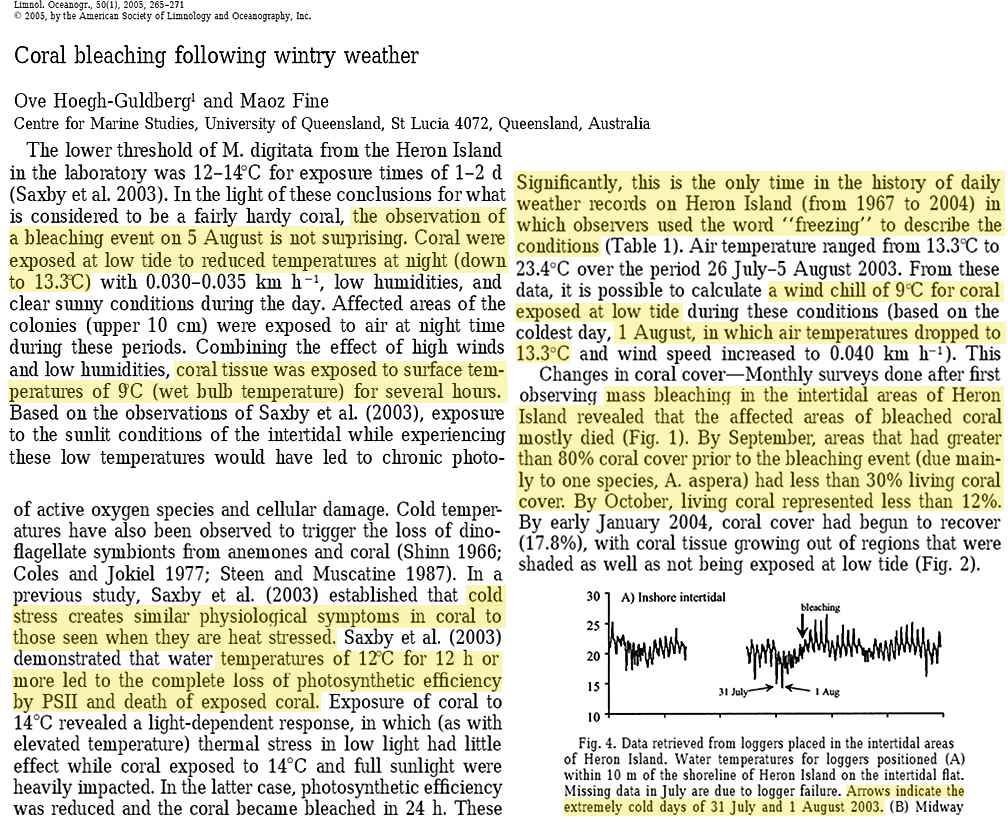 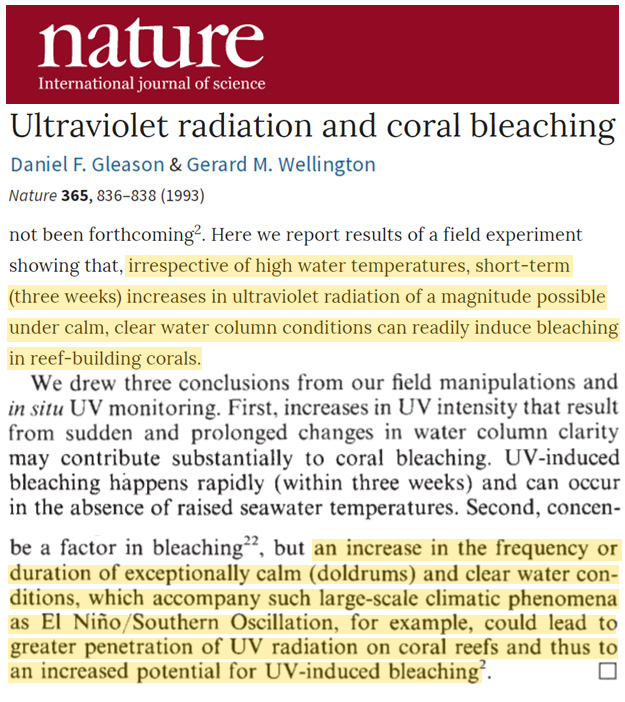 During the latest (2015-’16) El Niño, for example, corals in Indonesia were already bleached due to a locally rapid sea level fall before the higher El Niño-induced SSTs could have an impact (Ampou et al., 2017). 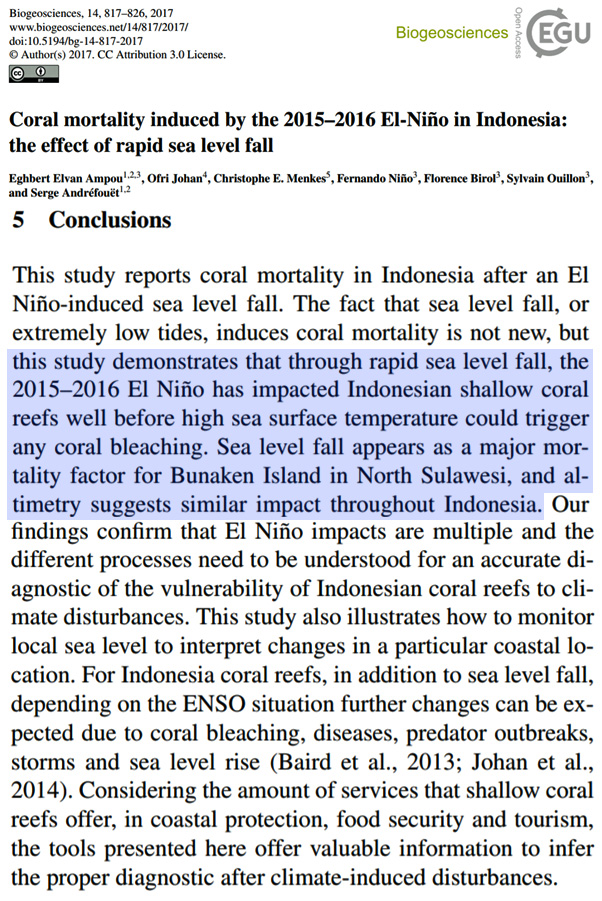 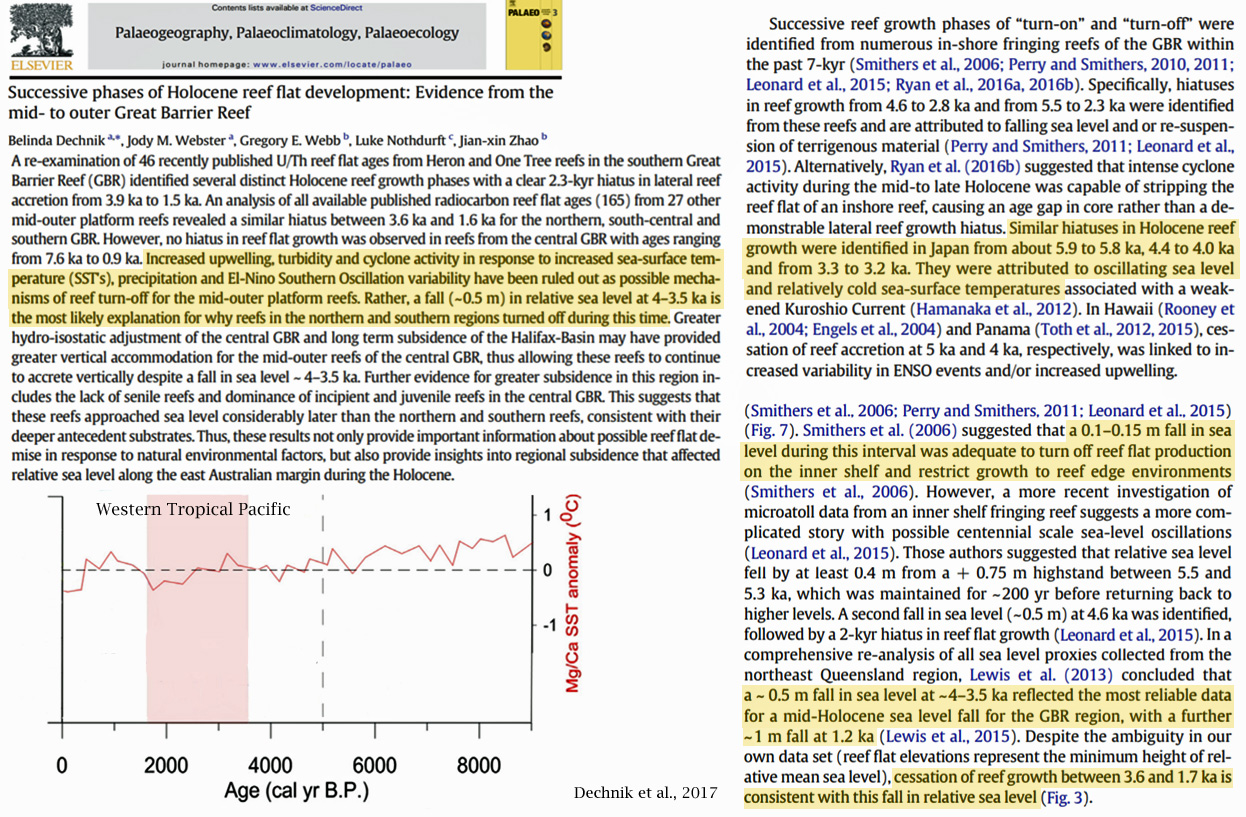 IV. Corals thrive and expand their range during warm periods

During the last glacial maximum (about 20,000 years ago), when sea levels were 120 meters lower than they are now and ice sheets covered much of the Northern Hemisphere, corals were very limited in their ecosystem ranges.

After deglacial warming commenced and sea levels rose at rates of up to 6 meters per century (60 mm/yr), reef growth and recolonization was “vigorous” (Humblet et al., 2019). 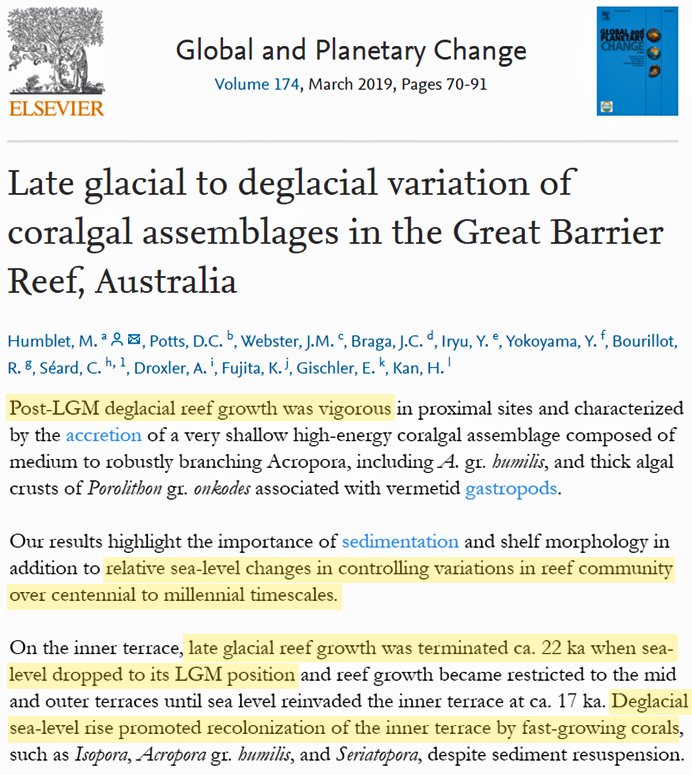 The reef growth trends continued precipitously throughout the Early Holocene as the Earth warmed and sea levels rose.

Yan et al. (2019) has also determined that reef “switch-on” (growth) phases occurred during warm periods such as the Holocene Thermal Maximum (2.0°C warmer than today), the Medieval Warm Period,  and even the Current Warm Period.

Reef “switch-off” (hiatuses and declines) phases occurred during the Dark Age Cold Period and the Little Ice Age, and were associated with falling sea levels. 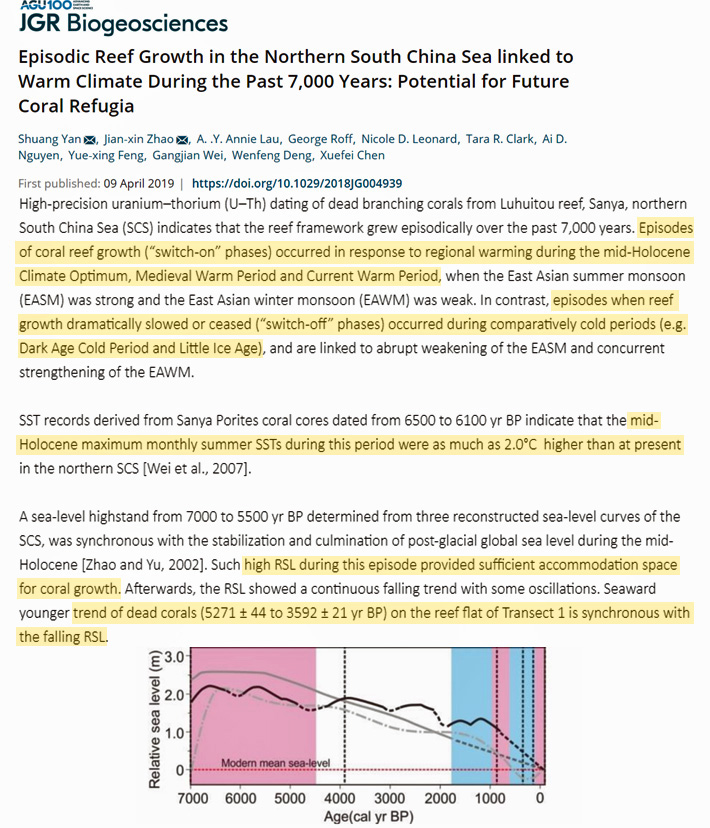 None of these scientific determinations would appear to support the popularized contention that coral reefs are currently in grave danger due to human activity. 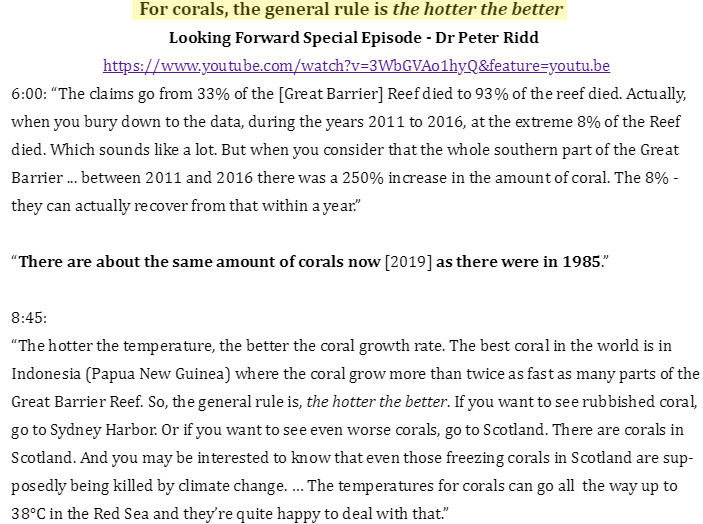